Villains Wiki
Register
Don't have an account?
Sign In
Advertisement
in: Monsters, My Little Pony Villains, Fantasy Villains,
and 15 more

Steal the Idol of Boreas (succeeded only to die in his attempt to escape with it).

Posthumorous Thief
Arimaspi is a minor antagonist in My Little Pony: Friendship is Magic.

Arimaspi is a giant monster in the shape of a mountain goat, except that he can stand up-right, had claws, and a single eye. He was also adorned with several golden accessories, further expressing its greedy personality.

Centuries ago, Arimaspi invaded Griffonstone to steal the Idol of Boreas, which united all the griffons. King Guto and his soldiers tried to fight him, but he overpowered them, grabbed the idol and escaped out the window. He then tried to escape by crossing a bridge above the Abysmal Abyss, but was cornered by the griffons. Suddenly, the bridge was struck by lightning, sending him falling to his death and taking the idol with him.

The Lost Treasure of Griffonstone

In the episode, his story is explained by Grampa Gruff and shown in a flashback. Later, as Pinkie Pie and Gilda try to save Rainbow Dash from falling into the Abysmal Abyss when she is injured trying to recover the idol, they reach a lower area where Arimaspi's skull can be seen next to the idol, proving his death. 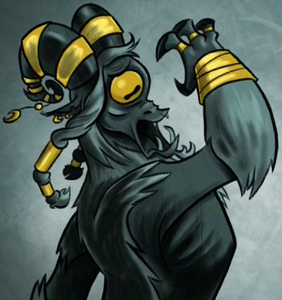 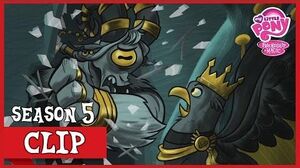 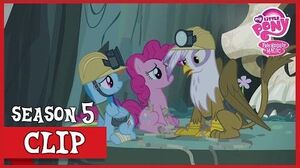