Lord of the Seven Darks, Lord of the Higher Hell, Knight of the Swords

Interacting with Elric and other eternal Champions.

Win the war against the gods of Law and take over the world.

Arioch is a Lord of Chaos in Michael Moorcock's Eternal Champion series. He is the patron god of Elric of Melnibone, and his kingdom.

Arioch is very intelligent and manipulative. He has taken a special interest in Elric , and constantly urges him toward serving chaos. He usually appears as beautiful androgynous man, naked and surrounded by fire. Sometimes, though, due to magical distortions, one may catch a glimpse of his true appearance, too horrible and deformed for words.

Arioch has been encountered by another Eternal Champion, Corum Jhaelen Irsei. Arioch was known here as the Knight of the Swords, one of three gods who ruled over Corum's world. The Knight of the Swords was the creator of the humans, or Mabden, as they were known in this world. When Corum first saw Arioch, he was a massive, filthy creature, with Mabden servants all over his body. Later, he appeared to Corum in the more familiar form of an attractive man.

Arioch is named after a legendary demon created during the era of demonology. 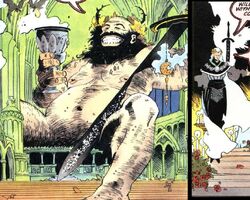 Arioch, as he appeared to Corum. 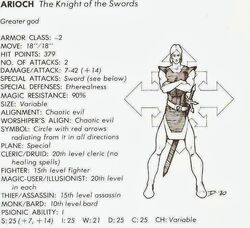 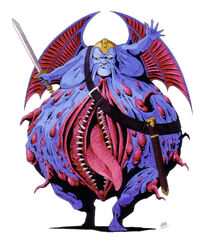 Arioch as he appears in the Megami Tensei franchise.
Add a photo to this gallery
Retrieved from "https://villains.fandom.com/wiki/Arioch?oldid=3886564"
Community content is available under CC-BY-SA unless otherwise noted.