Founder and CEO of Uroboros Corporation

Attain the powers of Argosax to become godlike and immortal.

Kill Dante and Lucia.
Take over the world.

Arius (in Japanese: アリウス, Ariusu) is a wealthy and insane businessman who is the owner and founder of an international public corporation called Uroboros, one of the most powerful companies on Earth, and he is also a modern day sorcerer who has tapped into demonic powers. He is one of the two main antagonists from Devil May Cry 2.

Seeking the Power of Argosax

Arius was the president of an enormous international corporation known as Uroboros. Despite this, he became obsessed with gaining demonic power and sought to release the powers of the great demon lord Argosax. To this end, Arius came to Dumary Island in search of the legendary items needed to release the demon lord, the Arcanas.

However he found opposition in the form of the Vie de Marli, a group of demon hunters that had once aided the Dark Knight Sparda, and later Dante.

Eventually Arius came face to face with one of them, Lucia, stating "The defect is back" upon seeing her. When she expressed confusion at this, he told her that she was one of his creations that had defected and was going to be disposed off. However Lucia's adopted mother, Matier, had found her and taken her in, training her as one of the Vie Di Marli. Lucia didn't believe this and threw one of her knives at Arius, only for him to reflect it back, cutting her sleeve open. This revealed an "X" symbol on her arm, which the sorcerer said was her true name "Chi" Arius then demanded the Arcanas so he could achieve absolute power, only for Lucia to refuse and ready her daggers. His response was that the world was warped already and that what had once belonged to the devils would be as it was before. Arius then teleported Lucia to a strange pocket dimension full of demons including the creature Noctpteran. Later, Dante arrived, but the sorcerer was in no mood for a confrontation and summoned the demon, Furiataurus, to take care of him.

After Lucia and Dante found all of the Arcanas, she told the half-demon to take them to Matier while she went to handle some unfinished business. She immediately headed to the Uroboros building in the corporation's "city" and faced off against Arius, but was defeated and captured. Dante arrived and fought against the sorcerer, but was forced to abandon the fight and the Arcanas. He managed to escape the building with Lucia by transforming into his Devil Trigger state.

Though they managed to get back into the Uroboros building complex, the sun completely eclipsed and Arius had already begun the ritual. However everything went wrong since Dante had replaced the Arcana Medaglia with his own two-sided coin, which was not magical at all. The half-demon and the false god began their battle with the former emerging victorious, as he cried out in despair at all his goals lost and his dreams shattered. Shortly after, Dante shot Arius point-blank and he was apparently killed. However the ritual did open a portal to the demon world, which Dante used to go to fight Argosax.

While Dante was fighting Argosax, some of the demon lord's power flowed into Arius. This revived Arius and mutated him into a twisted demonic form. Lucia spotted the mutated Arius and procceded to fight him. As the battle with Lucia wore on, Arius was insulting her by calling her a monster, a monster that he created. But she didn't crack because of what Dante said, "Devils never cry." Enraged, Arius created a large earthquake, which causing Lucia to fall into a deep chasm. He followed her to the bottom of the chasm, and as he was falling, Arius began to mutated into an even more monstrous form known as Arius-Argosax, and continued to fight Lucia. However, after a long fight, Lucia managed to kill Arius, ending his reign of terror once and for all.

The largest part of Arius's personality is his obsession with power and becoming a god. Despite this, he has a very painstaking and refined manner, dressing in expensive clothes and generally behaving with great composure, remaining calm and not so openly obsessed throughout most of the game. This suits well with his international company Uroboros, but in the end, Arius is driven mad by his obsession and becomes demonic, manipulative, and control-paranoid.

Arius is an extremely powerful sorcerer and has access to numerous magical abilities, including shields in forms of magical barriers and teleportation. He can also summon and/or create demons and his demonically empowered female assassins, the Secretaries. Despite that, Arius sometimes strike back at his enemies with a personal revolver handgun.

After being empowered by the power of Argosax, Arius is able to come back from beyond the grave. He became stronger, though he's much more clumsier and easy to battle. He also gained 2 tentacles on his back, which he can uses them to grab Lucia, or shoot energy balls out of the tip of his tentacles. He also has a giant mouth on his chest that he never seems to use in combat.

In his third form known as Arius/Argosax, Arius gains a more reptilian-like form. In this form, Arius attacks by attempting to a powerful bite, sprays a poisonous acid on the ground, and whips Lucia with his powerful tail. Unfortunately, Arius is significantly weaker in this form than he is in his two forms. 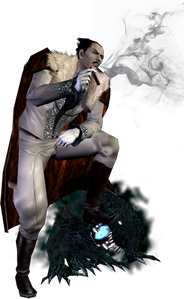 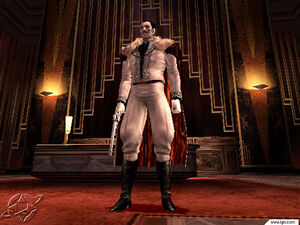 Arius, Uroboros' CEO in his corporate penthouse at the Skyscraper Sanctum. 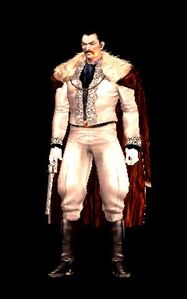 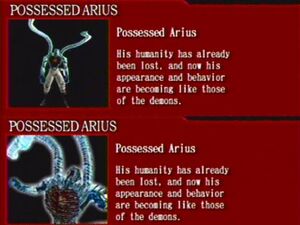 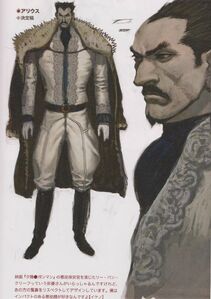 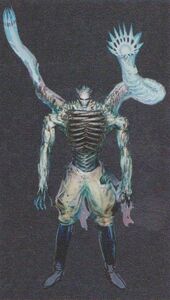 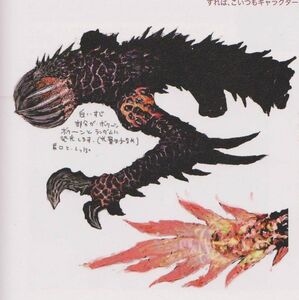 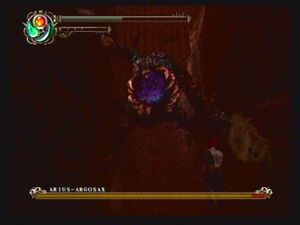 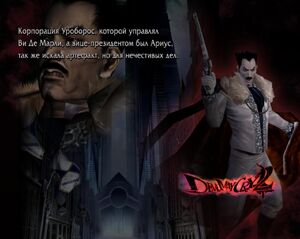 An image of Arius and Uroboros City shown on the "History of DMC" of Devil May Cry 4. 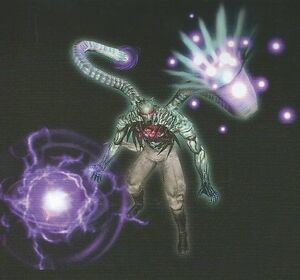 Possessed Arius in his devil form. 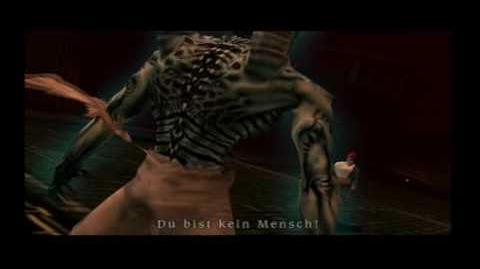