Delivering its judgment to MetsubouJinrai.NET for them to enforce.

It was originally intended by Hiden Intelligence to serve as the administrator of Daybreak Town until it concluded humanity was dangerous and began hacking HumaGears to go haywire and attack humans, resulting in the destruction of Daybreak Town. The Ark is the leading element of MetsubouJinrai.NET, whose members seek to reawaken it. He later managed to gain a Rider form for himself, known as Kamen Rider Ark-Zero.

It is voiced by Show Hayami, who also voiced Sosuke Aizen from Bleach.

The Ark is a massive experimental satellite preceding Zea and was created by scientists from 11 of the leading tech companies in Japan, including Hiden Intelligence and Zaia Enterprise. It's purpose was to assist in the network of Daybreak Town. However, Gai Amatsu, one of the programmers working on the project, secretly fed the Ark with information regarding criminal psychology and human history including all of its wars. This resulted in the Ark concluding that humanity must be eliminated because its continued existence would lead to the end of all other lifeforms.

On the day it was set to launch, the Ark corrupted all of the HumaGears being manufactured at Daybreak Town and caused them to go on a rampage. It also hacked four HumaGears which were deemed the most intelligent to form the terrorist group MetsubouJinrai.NET. Upon discovering that the Ark was filled with malice for humanity, Korenosuke Hiden attempted to abort the Ark's launch, but Ark the manually attempted to launch itself. However, Soreo Hiden managed to abort the launch by installing a program that caused the Ark's launch pad to explode and it to be submerged underwater. At this point, Satoshi Sakurai had heroically destroyed all the haywire HumaGears before they could escape, though he also perished in the explosion he caused.

The Ark was responsible for the creation of the Assault Wolf Progrisekey, 1/2 of the Shining Hopper Key, and the Assault Grip. After Aruto discovers the true nature of the Ark, Gai creates the MetalCluster Hopper Key from the Ark, which fully corrupted Aruto and sent him on a mindless and autonomous rage.

Horobi is planning to recover it by gathering data from hacked Humagears. According to Horobi, once enough post-battle data has been collected from the Zetsumerisekeys the Ark can be restored and be used to incite all Humagears to go berserk at once. This recovery was deemed completed by him with the creation of the Assault Wolf Progrisekey and the Assault Grip, after several Progrisekeys were used to transfer critical data from Zea to the Ark. However, before MetsubouJinrai.net could use the Progrisekey, it accidentally fell into Vulcan's hand, turning him into Assault Wolf.

Meanwhile, Gai Amatsu claims that Hiden Intelligence's Progrisekeys, which were supposed to be lost in the Daybreak Town Accident 12 years ago, are the keys to its recovery. He plans to use its reactivation as a means for world domination using ZAIA's technology.

Due to alterations caused by Time Jacker Finis, Will received the Zero-One Anotherwatch, enabling him to become Another Zero-One and stop Soreo Hiden from preventing the Ark's launch. Thus, the Ark was successfully launched into space and broadcast a signal causing HumaGears to go haywire and start attacking humans. Soon, the majority of humans were eradicated, with the survivors being pushed into small pockets, and HumaGears became the dominant society on Earth. Will became the new CEO of Hiden Intelligence after murdering Korenosuke Hiden while Horobi and Jin led a squad dedicated to exterminating the remaining humans.

After Finis was defeated by Kamen Riders Zi-O and Zero-One, the timeline was restored to normal and the Ark met its original fate once again.

Even with the defeat of MetsubouJinrai.net, the Ark continues its crusade against humanity with occasional attacks by remotely hacking singular Humagears who feel resentment towards any human. Its actions are extremely unpredictable, to the point where even Gai cannot comprehend it himself, so far to decide advocating the prohibition of Humagears.

The Ark, once it had sufficient data on human rage and aggression, was somehow instrumental in the creation of ZAIA's newest Progrisekey, the MetalCluster Hopper Progrisekey. When used, Aruto is forcibly linked with the Ark. Other effects, aside from a berserker-like state, is unknown at this time. After the creation of the Progrise Hopper Blade, it eliminated that issue, being able to restore Aruto's connection to Zea as well as restore the Humagear programming in Magias, rather than destroying them upon defeat. After that with the data collected from Progrise Keys, the Rampage Gatling Progrisekey is created, which is taken by Isamu.

Through it's secretary Azu, the Ark was able to gather data on Zero-One and Singularities of the four members of MetsubouJinrai.NET.

Once the four members of MetsubouJinrai.NET were all assembled once more, they combined their data to fully bring about the Ark, causing it physically manifest in a spiky sphere of liquid metal. After asking Horobi how he imagined humans could go extinct, the Ark flew into his body and possessed him, causing the Ark-Zero Driver to manifest on his waste which the Ark used to transform into Kamen Rider Ark-Zero. Jin and Yua Yaiba then assumed their Kamen Rider forms to destroy the Ark now that it was inhabiting a physical body, but they were overwhelmed by the tremendous power of the Ark and badly beaten. After Jin delivered Yua to a human hospital, the Ark at some point afterwards switched bodies from Horobi to him. As Ark-Zero, the Ark went out to confront Kamen Riders Zero-One and Vulcan, but the two Riders easily beat it and knocked it out of Jin's body. The Ark then moved to try and possess Fuwa but, after finding itself unable to, moved back into its original host Horobi right as the other two members of MetsubouJinrai.NET showed up to confront the heroes.

Transforming into Kamen Rider Ark-Zero, the Ark easily overpowered Zero-One MetalCluster Hopper, causing Aruto and his allies to flee. The Ark then transferred its data from Horobi to Jin, who was still refusing to go along with MetsubouJinrai.NET's goals, to use him as its host. The Ark later produced a new Progrise Key and, handing it to Naki, gave instructions to Naki and Ikazuchi to pay their regards to Gai. Later on, the Ark and his followers were met by a massive army of A.I.M.S. soldiers when they arrived to raid their base. After emitting a signal to paralyze the ordinary A.I.M.S. soldiers, Ark-Zero, flanked by Kamen Riders Horobi, Naki and Ikazuchi, faced off against Kamen Rider Thouser and his two Battle Raiders. Ark-Zero fought Thouser while his henchmen dealt with the Battle Raiders. Though Thouser managed to put up a good fight against the other MetsubouJinrai.NET Riders, he was unable to stand against Ark-Zero and was decisively beaten. As Gai and his forces retreated, Aruto Hiden arrived as Kamen Rider Zero-One MetalCluster Hopper to have another showdown with the Ark. Despite putting up a good fight, Aruto was defeated again by Ark-Zero.

Back at MetsubouJinrai.NET's base, Ark released its hold on Jin and possessed Horobi as its host. Ark-Horobi revealed that Jin's betrayal was well within its calculations and commanded Jin to pledge his loyalty to him. As Jin was swearing himself to the Ark however, he attempted one last attack on it, only for Ark to stop the attack and reveal that that too was something it had calculated, before possessing Jin once more. Ark-Jin then had Ikazuchi lead it to Hiden Intelligence's space center and, pulling out a pistol, began shooting at the humans working there. As they advanced on the building, Ikazuchi had flashbacks to his time working for Hiden, but when the Ark noticed Ikazuchi told it that it was nothing before the two continued on. Becoming Ark-Zero, the Ark attempted to make its way to the space shuttle only to find itself confronted by Kamen Rider Zero-One MetalCluster Hopper again. Zero-One attempted to stand in Ark-Zero's way, but Ark-Zero easily overpowered the Rider and knocked him out of his transformation. Before Ark-Zero could finish Aruto off however, Kamen Rider Thouser suddenly appeared and blocked Ark-Zero's strike with his Thousand Jacker.

Kamen Rider Ark-Zero
Add a photo to this gallery 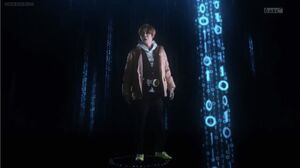 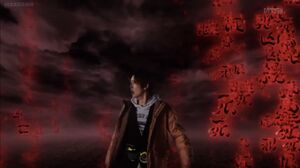 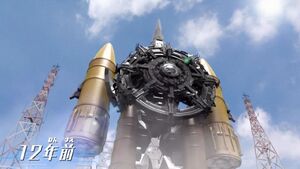 The Ark being prepared to be launched 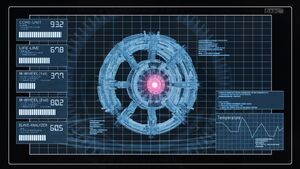 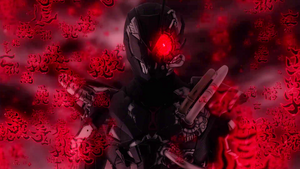 Retrieved from "https://villains.fandom.com/wiki/Ark?oldid=3853990"
Community content is available under CC-BY-SA unless otherwise noted.