Sell a batch of firearms to the Rotterdam biker gang.

Destroy his ship with all the evidence in case something goes wrong during the deal and escape (Hitman: Codename 47; both failed).
Purchase a nuclear bomb and arms from a biker gang and escape the authorities unharmed (Hitman: Contracts; failed).

He was an international Russian-Kazakh gunrunner born in 1930 in Semipalatinsk, Kazakhstan. He was also one of Agent 47's five fathers and the half-brother of Sergei Zavorotko.

Jegorov endured his childhood during the harsh poverty conditions and scrutiny of the local and loyal apparatchiks, causing him to cultivate a strong hatred for the USSR regime. He became a criminal at the age of 15 when he started stealing weapons from the Soviets and selling them to Cossack nationalists.

Later, Jegorov was turned to the authority by his father, but he managed to elude the police and went into hiding in the mountains before making his way to Marseilles, where he would join the French Foreign Legion in 1950.

By the end of his service in 1955, Jegorov had established a gun-running route through Turkey and Iran. His gunrunning activities continued after he left the league, culminating in his going into business with the Russian mafia in the mid 1980s and building up a gun-trafficking operation that covered most of the world. He also joined Dr. Otto Wolfgang Ort-Meyer's cloning project alongside Lee Hong, Pablo Belisario Ochoa and Frantz Fuchs.

After getting impatient over Ort-Meyer's setback, Jegorov and the others decided to pressurize him by cutting his funds. However, Ort-Meyer manipulated the ICA and sent 47 to eliminate them all. During the hit, Jegorov was making an arms deal with a local bikers gang with the help of his fellow gun dealer Ivan Zilvanovitch. 47 managed to locate Jegorov via a tracking device in the money briefcase used by the bikers to pay Ivan, before he infiltrated the heavily guarded dock at night, eliminating Jegorov and neutralizing a nuclear bomb on board his ship.

In the flashback of Hitman: Contracts, while attempting to purchase a nuclear bomb, Jegorov was intercepted and surrounded by the Dutch police force and special operations on board his cargo ship. Arming the nuclear device, Jegorov stated that the nuclear device would explode if he were to be shot and drop the device, threatening the SWAT team with it. Despite this, 47 was still able to assassinate Jegorov and neutralize the nuke.

Jegorov appears as a tall (6'), mildly overweight (240 pounds) man with balding dark hair and a widow's peak hairline, a moustache, shades, two gold chains, a gold tooth, a blue Hawaiian shirt, and a leather belt with a red star on the belt buckle. Although he is 66 years old, he appears considerably younger due to fresh organs provided by Dr. Ort-Meyer. In Contracts, his Hawaiian shirt is red, and only sports one gold chain. He also has noticeably less hair on his head.

He drives a white limousine with the "A A5666" on the number plate and wields a Beretta 92 in Hitman: Codename 47 and a Magnum 500 in Hitman: Contracts. 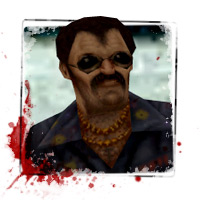 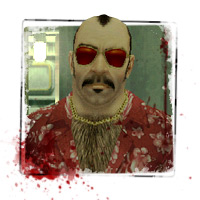