Founder and Commander of the Militia (formerly)
Rogue vigilante

Trying to kill the Batman (formerly).

The Arkham Knight dons a militaristic version of the bat-suit meant to mock Batman's appearance. The inside of his helmet gives him a heads up display of his troops throughout Gotham and the ears relay his commands to his troops. By using the Arkham symbol on his chest plate he inflicts psychological warfare on Batman reminding him of the past Arkham events. The chest plate also acts as a countermeasure to the Batclaw.

He was voiced by Troy Baker, who also provided the voice for the Joker in Batman: Arkham Origins, and Two-Face in the same series, along with countless other video game characters.

The eponymous titular villain, as aforementioned, appears as the central antagonist of Batman: Arkham Knight. Who is donning the mantle is currently unknown, yet he is still exclusively designed to be one of the few people who can hold their own against Batman, thus his appearance imitating the Dark Knight. He was shown in trailers to be using guns.

In the game, the Arkham Knight and his militia forces team up with Scarecrow and take over Gotham City on Halloween night. As Batman encounters him multiple times, the Knight mentions to Batman on how he ruined his life and how he's going to kill him. Throughout the game, Batman has multiple hallucinations of Jason Todd, the second Robin, being tortured and killed by the Joker. After taking down the Arkham Knight in an abandoned shopping mall, the Arkham Knight reveals himself to be none other than Jason Todd, whom Batman thought to be dead. Batman tries to get Jason to snap out of his rage and help him, but he refuses and runs away. After Jason disappears, both Scarecrow and super-villain Deathstroke take command of the Arkham Knight's militia forces. Later towards the end of the game, Batman is captured by Scarecrow and taken to the now abandoned Arkham Asylum. At the asylum, Scarecrow is about to kill Batman after he reveals his true identity, but a now redeemed Jason comes back as Red Hood to rescue Batman and help him take down Scarecrow.

In the Red Hood DLC, which takes place after the main story, Jason has rejoined the Bat family and acts in Gotham as the Red Hood, targeting Black Mask and his operations. According to Black Mask's thugs, the Red Hood also took out Killer Moth some time prior.

Jason was still imprisoned beneath the asylum, and was finally able to escape from his torture during the confusion of the Arkham riots and with the aid of Slade Wilson, better known as Deathstroke, who was hired by Joker to keep watch over his prisoner while he concentrated on his plans to obtain the Titan Formula from the asylum.

Todd convinced the assassin to help him in his own quest for vengeance under the prospect of tripling the amount of profits that Joker supplied him with. Deathstroke agreed after he placed a tracker within the young man to ensure that he did not attempt to escape before he made good on his offers and the pair broke into Wayne Tower and wired over five-hundred million dollars from Bruce's accounts and into a swiss account of Slade's creation. Todd and Deathstroke then escaped to South America, where they formed their plans to build up a massive militia army that was comprised of disgruntled and dishonorably discharged Army veterans, in order to ultimately bring war to Gotham City and inflict the vengeance that they both lusted for on Batman.

However, unknown to Jason, Joker had planned everything from the beginning, and knew that Deathstroke had the resources necessary for Todd to complete his plans. Over the following eighteen months, Slade kept Joker, who continued to pay the villain as his personal assassin and informant, updated on all developments with Jason, who was known as the Arkham Knight, and his plans for revenge. Joker knew that his scheme to turn the second Robin against Batman was paying off beautifully, perhaps better than he ever imagined, and that the 'Arkham Knight' would be the perfect contingency plan to gain the final laugh on the Dark Knight.

After he rescued Nora Fries from Joker's Henchmen and retrieved Mr. Freeze's stolen equipment, Batman eventually confronted Joker, who stared into a mirror and appeared to be perfectly healed, though his reflection curiously showed him still sick, at the Funhouse. However, the reality was that Clayface still posed as the healthy Joker while the real Joker was on the other side of the mirror, and escaped from the Steel Mill through that diversion. At the same time, Joker noticed that the entire confrontation between Batman and his imposter and accomplice was monitored by Jason, who had observed the events of Arkham City from afar.

After he struck a conversation with his old victim, Joker revealed his continued partnership with Deathstroke, instructing the assassin to aid Todd's quest for revenge, reinforced the young man's distorted perception of Batman abandoning him and encouraged him to ensure that he became a more well-known figure in Gotham as the Arkham Knight. While Jason brutally beat Joker and made an attempt on his life in retribution for what he did to him years ago, Joker, even in his sickly condition, was able to defend himself, easily subdued Jason, and carved around the 'J' brand on his cheek with a hidden knife. Joker left Jason bloody and bruised once again, and informed him that he had high hopes for the young man's plans against Batman and Gotham.

Mere minutes after the Joker's death, the Arkham Knight witnessed a brief encounter between Batman and the new Electrocutioner, who was quickly defeated. When Batman left, the Knight executed the would-be-super-criminal with a shotgun blast to the head. Later, when the Joker announced his plans to blow up the walls of Arkham City and free all the trapped inmates, the Arkham Knight followed Batman to Arkham Asylum. Batman triggered a final trap his dead nemesis had left for him. Wanting to kill Batman himself, the Arkham Knight attempted to save Batman, risking exposure. Both managed to survive the resulting explosion. Before Batman emerged from the rubble, the Knight discovered the remains of the Joker's diary. Deciding it would be useful to hold onto, he fled the scene before emergency crews arrived, with Batman remaining unaware of his stalker's presence. A family later spotted him in an alleyway after setting fire to a pair of the Joker's former henchmen. When Tweedledie, Tweedledum and Tweedledee were prevented from stealing Batman's new Batmobile and put in a holding facility, the Arkham Knight shot all three as well.

At first, the Arkham Knight is a mystery. The only information Oracle manages to give Batman is that his code name is the only thing intelligence sources can agree on and that he works with a Venezuelan black ops team. He is fanatically dedicated to besting and killing Batman for unknown reasons, displaying keen observation and insight into the Dark Knight's tactics. To this end he has allied with Scarecrow, intending to use a wave of Fear Gas to destroy not just Batman but Gotham as well, invading the city with his own private army of operatives and drones.

In the ACE Chemical Infiltration trailer the Knight uses these and an attack chopper to provide protection while Scarecrow finishes perfecting his new toxin. He abandons it temporarily to face off with the Dark Knight while he is attempting to rescue trapped workers, instructing his men to aim at the less armored sections of Batman's suit. As Batman attempts to leave with the last worker the Knight forces a showdown between his chopper and the new Batmobile.

The Arkham Knight has also set up a military occupation (consisting of checkpoints, watchtowers, armored personnel carriers (APCs), explosive bomb devices, unmanned tank drones, aerial drones, armored jeeps, and soldiers) throughout Gotham City, according to details released by Edge Magazine, making the city a dangerous place for Batman to traverse. The Caped Crusader will have to take out the militia, as part of four separate individual side-missions.

After being kidnapped by the Joker, Jason retained some defiance against his captors torture and mind games. As well, he held a lot of faith that Batman would come for him but his spirit was soon crushed when Joker revealed he had been "replaced" with the third Robin (Tim Drake). Subsequently, he became totally submissive towards the Clown Prince because of the intense torture he endured; however, he showed some determination and was able to escape the abandoned wing of Arkham despite being shot and wounded. But Jason was not the same person, he hated Batman and wanted him to suffer for leaving him to rot for nearly an entire year, even taking up a mantle to haunt his mentor; the Arkham Knight.

The Knight seems vengeful but patient and calculating as well. He seems to exploit opportunities as they are presented to him, such as discovering the Joker's diary or taking advantage of Batman's presence at Ace Chemicals to instruct his men to avoid aiming at the armored sections of his suit. He also seems psychopathic, displaying no regard for the "weak" Batman protects, contemptuous of the Dark Knight's principles and mercilessly killing those he deems deserving, such as the second Electrocutioner and remaining members of Joker's gang in cold blood. He also had an emotional breakdown towards the confrontation between him and Batman, highlighting his emotional and mental instability, especially towards his feelings with his former mentor. When Scarecrow asks why he hates Batman to such a degree the Knight coldly responds that no one could understand. He also considers himself Batman's greatest enemy, because he understands Batman more than any of his enemies could've. Despite his cold and apathetic demeanor, the Knight was capable of feeling anger, worse than that, rage towards his enemies. This was specifically the case while revealing his true identity to Batman and literally screaming in rage over his mentor "leaving him to die". In contrast to his ruthless and aggressive behavior towards killing Bruce, the Knight seems to care about his former allies such as Barbara Gordon (Oracle) and Alfred Pennyworth. 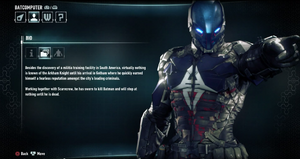 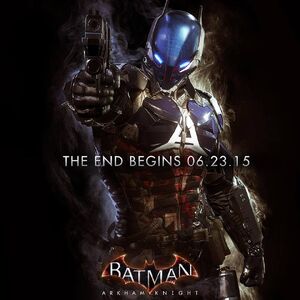 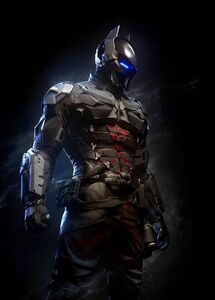 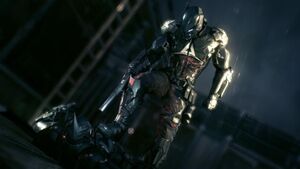 The Arkham Knight pinning down the Dark Knight 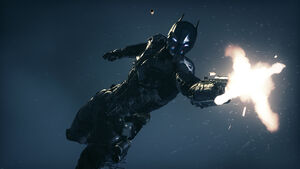 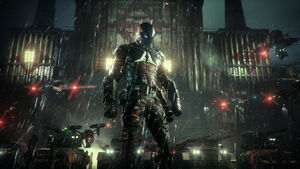 Arkham Knight in front of his army of drones. 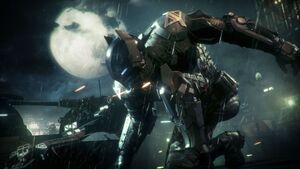 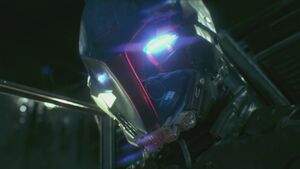 A closeup of Arkham Knight's mask. 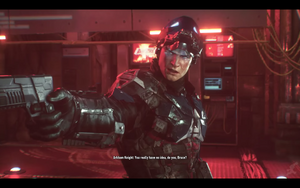 The Arkham Knight reveals himself. 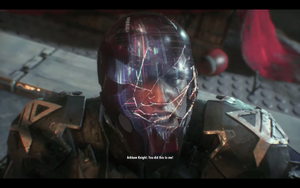 The end of the Arkham Knight. 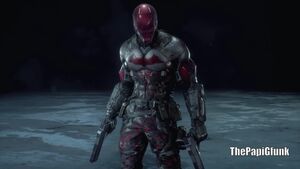 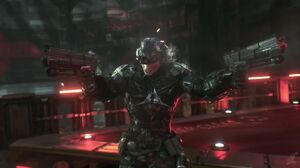 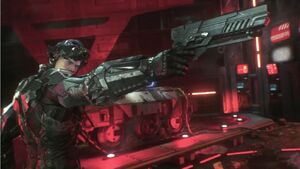 "You can't hide from me! I will hunt you down!" 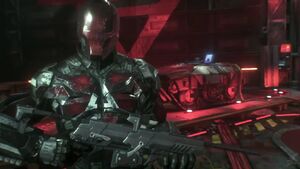 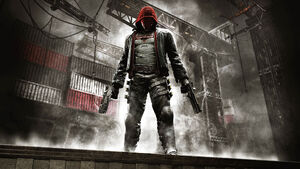 Red Hood as he appears in the DLC 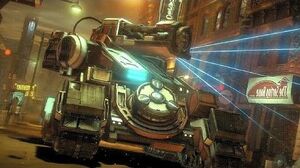 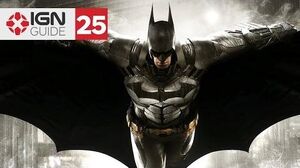 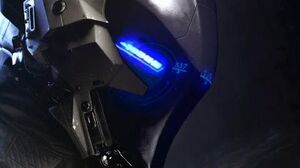 Retrieved from "https://villains.fandom.com/wiki/Arkham_Knight_(Arkhamverse)?oldid=3494317"
Community content is available under CC-BY-SA unless otherwise noted.