Villains Wiki
Register
Don't have an account?
Sign In
Advertisement
in: One Piece Villains, Male, Sadists,
and 63 more

Captain of the Arlong Pirates (formerly)

Conquer all of East Blue (both failed).

He was voiced by Jūrōta Kosugi in Japanese and Chris Rager in English.

Arlong considers humans to be inferior beings, and is very cruel to them. He thinks nothing of killing a town full of humans, although he seems to prefer controlling people with money and deals (like Nami and Nezumi). He is also rather easy to anger, going berserk after he was attacked by Usopp and having to be dragged back to his base by his crew to prevent him from destroying the whole town.

He does not seem frightened by anything, and his Fishman strength has made him extremely confident that he and his crew are virtually invincible. After Nezumi told Arlong he as a Marine wouldn't stay for fear of being seen in Arlong Park, at this point Arlong invited the Marine to a meal and offered to kill anyone who dared report him. He also has an eye for spotting exploitable talent that he can use for his goals and is an excellent planner; he spent years using Nami and her maps to plan their takeover of the East Blue. Nevertheless, any promise about money he makes, he keeps. The best example is when his crew urged him to keep Nami even if she brings the 100,000,000. However, even though Arlong states he can't go back on his word, he has no qualms about exploiting loopholes in his deals to unfairly get his way.

He is keen to separate his race from humans and constantly stuck by this mentality that his people are superior to humans in every way. During his fight with Luffy, the boy's constant fighting back made Arlong angry, to the point where it drove him into a deep anger. Arlong himself had expected Luffy to die quickly, his anger made him become foolish and destructive, even seriously damaging his own HQ building while attacking Luffy.

Despite thoroughly enjoying the suffering of humans, he appears to genuinely respect and care for his crew, as shown by his reactions to Zoro's massacre of his crew and to Luffy using one of them as a shield. He even had some respect for Nami, despite the fact she was human.

The Sawfish Fishman was once a member of the Sunny Pirates, of which Fisher Tiger was captain. But following Tigers death and the recruitment of Jinbei into the Shichibukai, the group split into pieces and Arlong formed his own "Arlong Pirates", before leaving the Grand Line for easier targets.

Arlong set up his domain on one of the larger islands in East Blue, with a number of smaller villages in the vicinity under his control. Arlong dismantled his original galleon and used the materials to build Arlong Park, an eight-story building that served as his headquarters. From Arlong Park, Arlong hoped to conquer all of East Blue using superior underwater tactics through maps drawn by Nami that charted underwater terrain.

Arlong prepares to shoot Bellemere. When Arlong and his crew (consisting of Hatchan, Chew, and Kuroobi), first arrived on the island that would someday become Arlong Park, the first village he encountered was Cocoyasi Village, the home of Nami. Arlong then proceeded to extort money out of the residents of Cocoyasi Village. Adults would have to pay one hundred-thousand, children would pay fifty-thousand or be executed by Arlong's men. Bellemere (Nami's adoptive mother) only had one hundred-thousand so she decided to pay for Nami and Nojiko and sacrifice herself. Arlong shot her in front of her children as an example of disobedience and then kidnapped Nami.

He forced Nami to become a part of his crew as a map maker, and told her that if she brought him one-hundred million beries he would free her village and everyone in it, including her adoptive sister Nojiko.

Years later, when Nami was about to fulfill her end of the bargain using money she stole from Monkey D. Luffy, Arlong arranged to have a corrupt Marine captain confiscate the money from her so she would be forever under his control.

Luffy, who followed Nami after being robbed by her, saw Nami brutally stabbing Arlong's tattoo on her arm in desperation. Angered by the obvious suffering Arlong had wrought against her, Luffy stopped her from hurting herself and unquestioningly accepted her plea for help. A long and arduous battle ensued between Luffy, Arlong, and the elites of their crews. While Zoro, Sanji and Usopp were able to defeat their opponents, in their tired and injured states they were absolutely no match for Arlong, although they helped save Luffy from a pool of water, enabling him to challenge Arlong.

Arlong preparing to finish off Luffy. By the end of the fight, only Luffy and Arlong were left standing and Luffy was taking a beating from Arlong's high-speed diving attack Shark on Darts and his sword Kiribachi (Saw Shaped Sword/Saw Blade), which resembled a long steel saw with teeth shaped like a shark's. Luffy seemed to be on the verge of defeat until the battle moved into the top of Arlong Park, where Nami slavishly made her maps for Arlong as a child.

After feeling the turmoil and desperation that had seeped into the room over the years, Luffy became enraged and the tables turned dramatically. Arlong is defeated by Luffy. Using the full power of his attack Gomu Gomu no Ono/Gum Gum Battle-Axe, Luffy managed to send the full force of Arlong's attack: "Shark on Haguruma (Gear)/Shark Tooth Drill" attack through to the bottom of Arlong Park, breaking Arlong's cartilaginous back and destroying the building in the process.

This did not, however, kill him: he is currently imprisoned in Impel Down along with his crew, although he may have escaped during the Impel Down Arc's mass breakout. 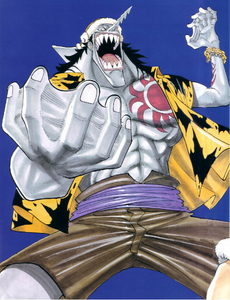 Arlong in the manga. 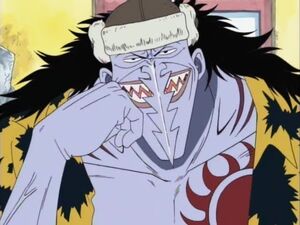 Arlong as he appears in the anime. 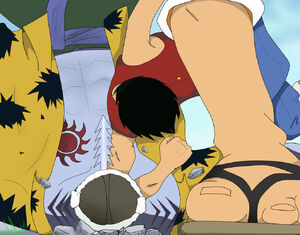 Arlong being elbowed into the ground by Monkey D. Luffy. 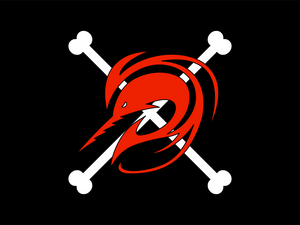 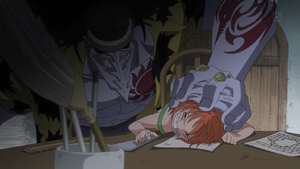 Arlong abusing Nami in her youth. 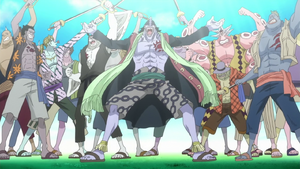 Arlong and his pirate crew, the Arlong Pirates. 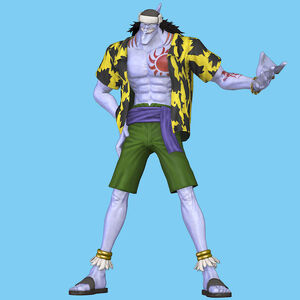 Aarlong as he appears in One Piece: Pirate Warriors. 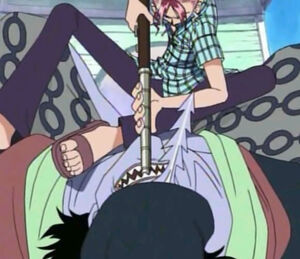 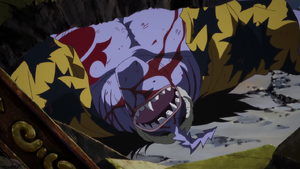 Arlong after being defeated by Luffy. 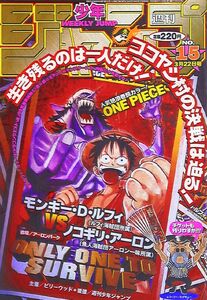