Members of the Seven Magnificent Primeval

Genocidal Right-Hand
Arm Primeval, also known as ZX-07, is a major antagonist of the second season of the anime King of Braves GaoGaiGar. He is the leader of the Seven Magnificent Primevals, and is one of the most powerful members of the Machine Primevals. He can be easily recognized with his giant right arm, which he uses to shoot bursts of gravity. He is also shown to have a rivalry with Soldato J, due to their unfinished duel on Red Planet.

He was voiced by Chafurin, who also did the voice of Gregory in Gregory Horror Show, Saint Charloss in One Piece, the Torturer in Berserk: The Golden Age Arc, Wyzen in Asura's Wrath, and Nitros Oxide in Crash Bandicoot.

Arm is a powerful Primeval that is proud of his power, which is justified as he is capable of fighting both Guy Shishioh and Soldato J at the same time. Asides from his power, Arm is shown to be quite intelligent, being able to use traps against the GGG, and using sand to escape from being purified.

Back on Red Planet, Arm, taking the form of a armored humanoid, fought Soldato J, with their duel ended up in a stalemate as they were unable to defeat each other. This left a grudge between them, however, and this duel would be suspended after Soldato J was mechanized into Pizza.

Later, he, along with other of the 31 Machine Primevals were summoned to Earth by Pasder. While he had his body destroyed by Mic Sounders the 13th's soundwave, Arm, along with other Primevals, they still had their core unharmed and landed on Earth. Later, Arm assimilated with a human and met up with the other Seven Magnificent Primevals as Pagliaccio ordered them to strike the GGG Orbital Base, since GGG has been proven to be a huge threat for the Primevals. After assimilating with a ship, Arm teamed up with Eye Primeval to raid one of the segments of the GGG base. With Eye's ability to predict the future, Arm made quick work of the guards of GGG, and later, Arm and Eye encountered Guy Shishioh. Arm's gravity waves granted him the advantage against Guy, and he used them to throw him into outer space. However, Guy was able to return to Orbit Base and continued to fight them, but Arm still had the upper hand. Before Arm could finish Guy off, however, he was suddenly hit by a ES-Missile (Missile that can travels via portals known as Escape Windows) from Soldato J's J-Ark. Soldato J then joined the fight, and while Guy wanted J to step out of the fight, he refused and they both ganged up on Arm Primeval. Despite being outnumbered, Arm is able to easily throw both Guy and J around with his gravity wave thanks to the Eye Primeval's clairvoyance. Later, Guy saw mysterious illusions that helped him to be able to avoid Eye's prediction and stabbed Arm, who immediately launched Guy and J away. However, before they can continue the fight, Ribs and Liver Primeval, who were sucked out into space thanks to GoldyMarg, requested to change their battle strategy. Thus, Arm and Eye were forced to retreat. They showed up in the engine room of the GGG Orbit Base to transform it into a Zonder Metal Plant, thus forcing Taiga to order to cut the engine room from the Orbit Base and later blow it up. As a result, Arm, together with other Primevals, were forced to retreat to their ships and started blasting the Orbit Base. Eventually, the battle ended with Liver Primeval being destroyed, preventing the Magnificent Primevals from recovering from damage.

Arm and the remaining Primevals then headed to the Moon, where they fused to become the powerful Combined Primeval, combining and amplifying their powers. Despite that, Guy destroyed the combined Primeval by focusing a Solitary Wave on its barrier of particles. While four of the six Primevals' cores were recovered, Arm and Intestine managed to escape from being purified by Mamoru.

Arm Primeval later resurfaced in Egypt, and under the orders of Pagliaccio, Arm started to build another Zonder Metal plant with the hidden Stomach Primeval. Eventually, Arm launched two pyramids as missiles to GaoGaiGar and King J-Der and they destroyed them, but it was revealed to be Arm's trap as upon exploding, they released sands that immobilized them, thus causing GaoGaiGar and King J-Der to fall into the sea. Arm then continued to construction of the Zonder Metal plant until the super AI FuRyu appeared to stop him. Arm summoned the Stomach Primeval, who fused with the Giza Sphinx to stall FuRyu. FuRyu was unable to defeat Stomach Primeval until EnRyuu, who obtained the energy of The Power (Powerful energy from Jupiter) to help him, fusing into GouRuyuuJin to fight them. In response, Arm fused with Stomach as well, although he would fail to defeat the heroes. While Mamoru purified Stomach Primeval, Arm was able to use his gravity wave the blow some sand upwards as a distraction to escape. 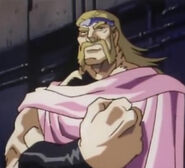