Armageddemon's is a Mega Level Digimon. His sheer size is so large, that he couldn't returned to the internet. He resembles a combination of a giantic insect and a dinosaur, he has six legs, missles where he could shoot from his back, and a dinosaur-like head and tail.

Diaboromon managed to get killed in the Digital World, however he planned this. This proved to be a mistake, because, Diaboromon's offsprings, Kuramon combined and formed Armageddemon. This allowed Armageddemon to release his Destiny Destroyer at point blank range upon Omnimon. After defeating Omnimon, he also made short work of Imperialdramon Fighter Mode. The combined power of WarGreymon and MetalGarurumon created the Omni Sword, reviving Imperialdramon and creating Imperialdramon Paladin Mode whose Omni Sword attack ultimately killed Armageddemon, releasing all the Keramons who were forever sealed within the Omni Sword, ending Diaboromon's rampage.

Due to his level and massive size, he presumely has superhuman strength and nigh-invulnerability. He was able to beat both Omnimon and Imperialdramon with little effort. He proved to extremely durable, able to repeated shots from Omnimon's surpreme cannon even from the inside out, Imperialdramon's positron laser barrage, and even the Giga Crusher attack that destoyed MaloMyotismon. 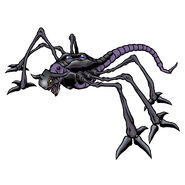 Retrieved from "https://villains.fandom.com/wiki/Armageddemon?oldid=3807427"
Community content is available under CC-BY-SA unless otherwise noted.