Destroy all weapons and protect the world

Armagedroid is a recurring antagonist in Nickelodeon TV show My Life as a Teenage Robot. Armagedroid is a one hundred foot-tall android created by Dr. Nora Wakeman (also the creator of XJ-9/Jenny.). He first appeared in the episode of the same name.

He was voiced by Kevin Michael Richardson, who also played Joker in The Batman, Lobo and Tartarus.

His original purpose was to destroy all alien weaponry during "The First Intergalactic War", but eventually became mad with power and destroyed ANY weapon that crossed his path. He is one of Jenny's few enemies that not only she couldn't defeat alone, but almost killed her twice in the process. After Armagedroid, Nora stated that she started the XJ series to replace him.

Armagedroid returns from his lava trap and attacks Tremorton. He starts taking Jenny's weapons. Eventually he was defeated due to taking in a powerful enough explosive to destroy his body and launch his head into space due to Nora and Jenny's quick thinking.

Armagedroid was later revived by Killgore. Later, Jenny and Killgore are inside his rebuilt body as he continues to quest to destroy all weapons. Eventually, Armagedroid is defeated as he is reminded technically he is a weapon himself and his body is full of weapons. Realizing this, he starts to tear his body apart and activated his own self destruct function to destroy himself and all his weapons. 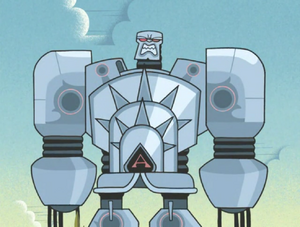 Armagedroid after being rebuilt by Killgore. 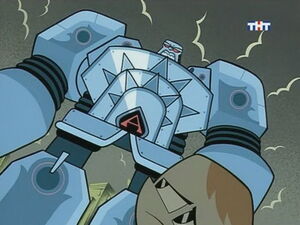