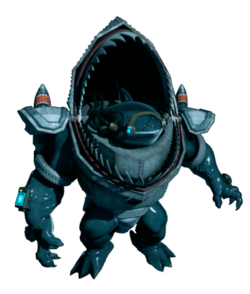 Armaggon is a new villain in TMNT season 4, he is also a wanted criminal, a bounty hunter and has been hired by Lord Dregg to hunt, bring the Turtles alive to him and Armaggon is voiced by Ron Perlman.

He is shown to be greedy when he doubled his bargment with Dregg when he gets a new mission.