The Armed Brain Army Volt are a cabal of scientists seeking to dominate the world and exterminate those with "inferior minds" to create an ideal world for their superior genius. They are based out of the Zuno Base space station, and use triangular ships to travel between it and Earth. 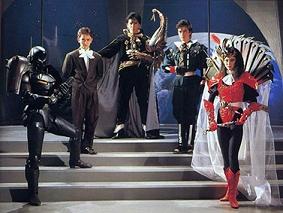 Retrieved from "https://villains.fandom.com/wiki/Armed_Brain_Army_Volt?oldid=2725697"
Community content is available under CC-BY-SA unless otherwise noted.