Capture a mine to manufacture weapons (failed)

Armored Armadillo (Armor Armarge in Japan) is one of the eight Maverick bosses from Mega Man X.

Armored Armadillo was a Maverick Hunter and the leader of the 8th Armored Division. Despite his rough, no-nonsense personality, he is blindly loyal to his superiors, especially Sigma. As such, when Sigma started his rebellion, Armadillo immediately followed him out of loyalty, taking control of a energy mine to supply the Mavericks with mined ore used to fabricate ammunition. He fought X in the mines but was destroyed by him.

Armadillo's main method of attacking is to roll up into a ball and bounce around the screen, and while on the floor, he will also shoot beams from his head, but he will occasionally block the player's shots and retaliate with shots of his own. His weakness is the Electric Spark, which will break his armor and make him more vulnerable. 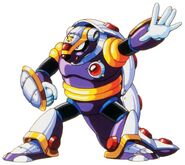