Captain/commander of the Hammer Bros.

The Army Hammer Bro is the secondary antagonist and penultimate boss of the Nintendo DS game Super Princess Peach. He is a high-ranking member of the Koopa Troop, and leads the percent made of Hammer Bros..

He is notable for being the only Hammer Bro known to possess horns sticking out of his helmet, and he wears a black helmet, shell, and boots.

The Army Hammer Bro is first seen in the game's opening, where he is revealed to be the one who find the Vibe Scepter, and Bowser sends him out to cause anarchy in the Mushroom Kingdom. Taking several of his Hammer Bros. along, as well as a rather vital Goomba, The Army Hammer Bro sets off to fulfill his orders. In the end, he and his troops manage to do just what they are commanded to, as not only did they kidnap several Toads, they also manage to take both Mario and Luigi themselves off to Bowser's Villa.

In battle, Army Hammer Bro is not much different than his brethren, but he does jump higher and faster (thus being able to move farther around the Throne Room), throw slightly bigger hammers and can endure more hits and summon Hammer Bros. by roaring when there are little to no more of them. To defeat him, all that Peach must do is whichever of these strategies five times:

Then, Army Hammer Bro is destroyed in a brilliant explosion. After his death, Peach will move on to fighting Bowser himself. 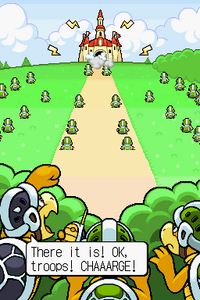