Genocidal biomechanical military
DARK and its minions are the main antagonists from the classic game Legendary Wings / Wings of Ares.

In Earth, the human race was about to achieve new enlightenment and evolution from an ancient civilization to a state of millenium with the guidance of DARK, an extremely advanced supercomputer built and constructed by ancient alien race who settled on Earth thousands of years ago. Then after DARK was completed, for reasons known only to themselves, the alien settlers left Earth as mysteriously they had arrived. For thousands of years DARK led humanity to prosperity.

Then the unimaginable happened: DARK suddenly began to malfunction and has gone genocidally insane.

DARK, now bent on annihilating humanity which it once cared for, dispatched armies of machines (which once protected humans) and mutants to initiate global purge of humans. The world went into a terrible panic. Screams mixed with pain and horror from humanity began to fill the skies. Soon the human race is on the brink of extinction. Just as humanity was down to less than 1% left a miracle occurred: Ares, the God of War, granted two chosen humans Michelle Heart and Kevin Walker Wings of Love and Courage and entrusted the pair with the survival and future of the human race. Time is of the essence. Take Wings and destroy DARK and its wicked military minions.

20,000 years into the future, mankind has built a giant supercomputer named DARK to govern the planet Earth. For thousands of years, DARK has governed humanity with wisdom, justice and led humanity to prosperity. But now the unthinkable has happened: DARK has malfunctioned, and humanity is writhing in agony in the grasp of no longer a sage guardian, but a genocidal tyrant. DARK has built a fleet of robotic legions and warships to patrol the skies, and also has created an army of mutant abominations to guard the various underground bases from which it now terrorizes mankind.

Lulled and dulled by thousands of years of peace, the humanity of Earth are rendered totally defenseless against the army of DARK. Soon the humanity is driven to a brink of extinction. Just as situation seems doomed for mankind, two brave human youths, following an ancient Greek mythology, have devised mechanical wings to bear them aloft in search of DARK's bases, intending on destroting them and ultimately DARK itself. It was then Ares, the God of War, appeared to the two youths and deeply moved by their extraordinary courage and determination, lent his divine power to the mechanical wings to come alive and entrusted them with the survival and future of the humanity.

Donning the now-alive mechanical wings, armed with the last remaining guns and air-to-ground missiles from an arsenal which soon crumbled under DARK's onslaught, the two human youths began flying across the continents and oceans to seek out and destroy the inhuman mechanical colossus and its brutal army. But DARK's minions will prove to be a constant menace, and Giant Heads, grotesque stone face constructed by DARK to guarding the path to each of DARK's underground fortresses. Giant Heads would suck up and entrap any unsuspecting victims into depths with their gaping mouths, where bizarre mutant monsters prowl the corridors. Only when eliminating the organic guardians of Giant Heads can the human youths escape from the belly of the beast and continue taking wings to their quest to destroy DARK.

The two youths must destroy DARK, or the mankind is lost along with them. 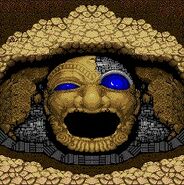 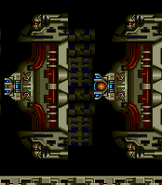 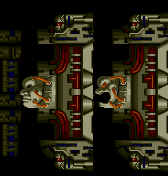 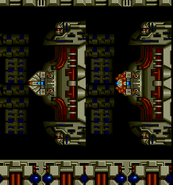 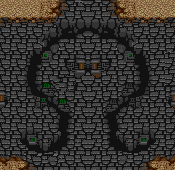 Supercomputer Devil
Add a photo to this gallery

Retrieved from "https://villains.fandom.com/wiki/Army_of_DARK?oldid=3115009"
Community content is available under CC-BY-SA unless otherwise noted.