Student at Libertyville High School (in the novel; formerly)

To keep Christine and to kill anyone whom she thinks is a threat to her including his friends and his family.

Arnold Richard "Arnie" Cunningham is the secondary antagonist of Stephen King's Christine after the deaths of the Repperton gang including the local teens' leader Buddy Repperton himself one by one of Christine, the other two in the former role being Dennis Guilder and Leigh Cabot.

He was portrayed by Keith Gordon.

In the novel, Arnie is myopic (near-sighted) and has only one friend, the popular high school jock named Dennis Guilder, and both of them are students at Libertyville High in Libertyville, Pennsylvania.

He notices Christine and urges Dennis to go back so he can look at it. After he wants to buy it, he hastily writes Roland D Lebay, a cheque. After his parents refuse to let him keep the car at the house he is forced to store it at a Do-It-Yourself garage run by Will Darnell and later the airport.

Later he restores the car to its natural beauty but the more time he spends with Christine the more she takes over his mind. Now obsessed with the car, his personality changes and he no longer wears his glasses as if his vision has improved greatly and he becomes humorless and prideful but also assertive and cruel. After Leigh Cabot becomes his girlfriend Arnie gets into a fight with Buddy Repperton which results in Repperton being suspended.

Later on when Buddy and his posse co-trash Christine, Arnie is shocked to discover all the hard work he put into restoring the car has been ruined and is determined to restore her back to normality. Later on, even before or after the deaths of his parents Regina and Richard and Michael Cunningham, Arnie strains his back and starts wearing a back brace and later on Dennis and Arnie have an argument in which he goes against his own friends and in the process is killed in a motorway accident.

In the film, Arnie is best friends with Dennis Guilder and a student at Rockbridge High in Rockbridge, California. On September 12, 1978, he purchases Christine from Mr. George D Lebay, brother of the late Roland D. LeBay, who was Christine's previous owner. After an argument with his mother and father, Arnie was forced to keep it at the Darnell's Do-It-Yourself Garage run by Will Darnell. Soon Dennis learns that LeBay's wife named Rita (Veronica in the novel with their daughter named Rita) died in Christine of carbon monoxide poisoning after the recent death of their 5-year old daughter, though she wanted die the same suicidal way her careless husband died because of his obsession with Christine.

Later on Arnie falls under Christine's influence and after Buddy and Co trash her he takes his anger out on Leigh, his girlfriend. After his parents tell him they will buy him a new car since now his current vehicle has been vandalized by Repperton and his teen thugs, he fights verbally and physically with his parents and even goes as far as to strangle his father. He swore revenge on the people who trashed Christine and is determined to repair her but she repairs herself in front of him as Christine shows her regenerative powers to her new "lover".

Arnie then goes against his own two friends Dennis and Leigh and attacks them at Darnell's garage that night but is killed after being ejected through the windscreen and being impaled on a hard shard of glass. 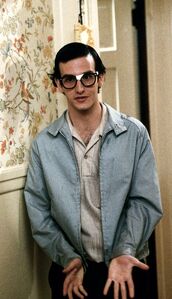 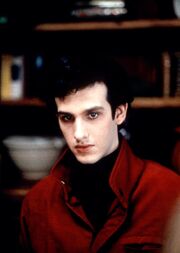 Arnie's death
Add a photo to this gallery

Retrieved from "https://villains.fandom.com/wiki/Arnie_Cunningham?oldid=3450869"
Community content is available under CC-BY-SA unless otherwise noted.