NOTE: This article is about the incarnation of Arnim Zola from the Marvel Cinematic film series. The mainstream version can be found here: Arnim Zola.

Mastery of tactics and strategy
Engineering

Serving the Red Skull and helping complete his plans.

Aid Red Skull in his goals with the Tesseract (failed).

Rebuild HYDRA within S.H.I.E.L.D. (succeeded).
Use Project Insight to kill anyone who is threat to HYDRA so they can take over the world (ongoing).

He is a Swiss Nazi scientist who aids Red Skull to organize HYDRA in his quest to conquer the world with the Tesseract. After Red Skull's defeat, Zola is pardoned and recruited by S.H.I.E.L.D., but instead joins forces with Alexander Pierce and rebuilds HYDRA after its dissolution, allowing the organization to survive into the 21st century and pose a threat to the Avengers through its many undercover operatives.

He was portrayed by Toby Jones, who also played the Dream Lord in Doctor Who, Lanfranco Cassetti in Agatha Christie's Poirot, Aristides Silk in The Adventures of Tintin: The Secret of the Unicorn, Culverton Smith in Sherlock and Gunnar Eversol in Jurassic World: Fallen Kingdom.

Zola is a Nazi scientist who works with the Red Skull to harness the Cosmic Cube's power (known in the film as the Tesseract). When HYDRA was organized he became his second in command and personal scientist. After HYDRA forces found the Cube, Schmidt asked Zola if he could study its power, and he accidentally discovered how to transform its energy into advanced laser ammunition.

He designed advanced weapons for HYDRA when they became separated from Nazi Germany and was valued enough by the Red Skull to help him escape by giving the scientist access to his personal automobile when Captain America raided the base, thus enabling Zola to also deliver it to safety in the process. He later staged an ambush for Captain America and the Howling Commandos onboard a train, in which Bucky Barnes lost his life, but was eventually captured and interrogated by Chester Phillips, Phillips noting that his lack of the cyanide pills normally used by HYDRA agents to prevent capture suggested that he did not want to die personally.

In exchange for sanctuary after Phillips sent a fake letter confirming that he had provided the Allies with information, Zola told them everything he knew about HYDRA and revealed that Red Skull's plans were of world domination.

Zola returns in a minor, yet important role in Captain America: The Winter Soldier, where Captain America and Black Widow find him in an abandoned S.H.I.E.L.D. base and it is revealed that he uploaded his consciousness into a supercomputer before receiving a terminal diagnosis in '72, leading to his physical death.

Zola reveals that, when S.H.I.E.L.D. was founded, he was recruited to work for them, but at the same time, hoping to finish up what the Red Skull has started, Zola rebuilt HYDRA within S.H.I.E.L.D. and that they had been secretly been manipulating the world for many years to the point where humanity was willing to give up its freedom. Under the orders of U.S. Secretary of Defense Alexander Pierce (who is a high-ranking member and current leader of HYDRA), Zola designed an algorithm to be implemented by the S.H.I.E.L.D. helicarriers designed by Project Insight that would wipe out several million people on planet Earth - the only ones that could do anything to stop HYDRA from establishing a "new world order".

However, their conversation comes to an end when S.H.I.E.L.D. launches a missile attack pinpointed on Rogers' location, as Zola has been distracting them to allow the launch to happen. Whilst Rogers and Romanoff barely make it out alive, Zola presumably dies in the missile explosion.

It is also revealed that he was the true mastermind behind Howard and Maria Stark's deaths, by planning out an automobile "accident" on Long Island, which took place in 1991. It was also revealed later in Captain America: Civil War that the assassin responsible for the accident was none other than Bucky Barnes, who was, at that time, being brainwashed by HYDRA operative Vasily Karpov.

In Avengers: Endgame, when the Avengers travel back in time to collect the Infinity Stones and undo Thanos' genocide, Tony Stark/Iron Man and Captain America travel back to the S.H.I.E.L.D. base in 1970 to retrieve Pym Particles and the Space Stone. While there, Tony happens upon his father Howard, searching for Zola, wanting to ask him important questions.

In the anthology series What If...?, Arnim Zola has two variants so far.

What If... Captain Carter Were The First Avenger?

The first variant appears in the first episode of the series. He first appears being escorted on a truck with the tesseract, which his superior; Johann Schmidt, also known as the Red Skull. Intends to use to some The Third Reich, which he believes to be Hydra's Champion. He is captured by Captain Carter, who takes the tesseract as well. After the tesseract is taken back by Red Skull, Captain Carter interrogates Zola for the location of Red Skull's main base. He is never shown again in the episode, nor is it shown if he still hides HYDRA within S.H.I.E.L.D.'s ranks, if he was ever recruited or not. 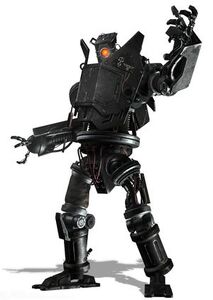 Zola as he appears in the video game. 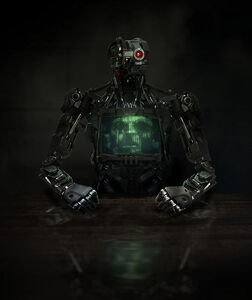 Concept art of Zola as he would have appeared in Ant-Man. 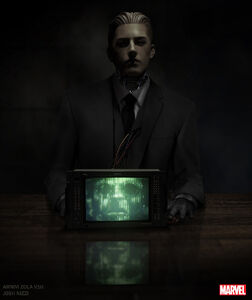 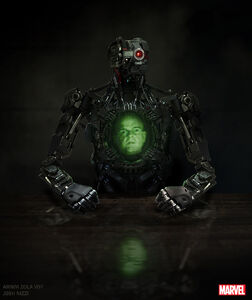 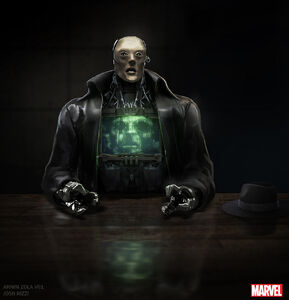 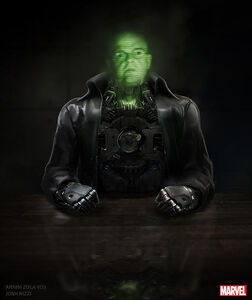 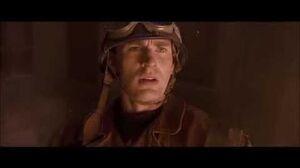 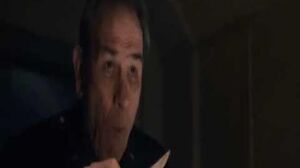 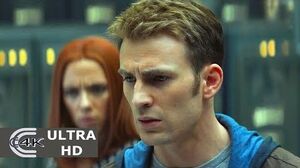