A Real Mensch
The Mother of All Viruses

Mastery of tactics and strategy
Engineering

Biding his time in the HYDRA base.

Gain control of the Infinity Stones (ongoing, but will never succeed).

Arnim Zola is a major antagonist in the first season of the 2021 Marvel animated anthology series What If...?, serving as the villainous tritagonist of "What If... Ultron Won?" and one of the two final antagonists (alongside Prince Killmonger) of "What If... the Watcher Broke His Oath?".

He is a variant of one of Arnim Zola's various artificial intelligence copies, who is one of the few survivors of Infinity Ultron's omnicidal campaign throughout the multiverse. He was retrieved from the Siberian HYDRA base by Black Widow and Hawkeye in desperation, to be used to override Ultron's intelligence.

Like his original version, he was voiced by Toby Jones, who also played the Dream Lord in Doctor Who, Lanfranco Cassetti in Agatha Christie's Poirot, Aristides Silk in The Adventures of Tintin: The Secret of the Unicorn, Culverton Smith in Sherlock and Gunnar Eversol in Jurassic World: Fallen Kingdom.

Arnim Zola played a major role in a second reality where Ultron had succeeded and sought to wipe out life across the multiverse. After Black Widow and Hawkeye survived the attack, they went to a secret intel base where Black Widow revealed that her plan was to find the file on Arnim Zola so that they could find the last living copy of his consciousness. After hundreds of folders and almost giving up, they found his and discovered that there was a copy of him at a secret arctic base where his job was to oversee a super-soldier project. When they arrived and turned him on, Black Widow explained that both S.H.I.E.L.D. and Hydra were dead. Even so, Arnim was not quick to agree to a team up, until Hawkeye threatened to poor water onto his digital body. After agreeing, they uploaded him to one of Hawkeye's arrows and called Ultron's bots over to come and find them. Once they arrived, Hawkeye shot the arrow into one of them, which uploaded Arnim's mind. After being uploaded, they destroyed his legs, which caused him to remark on their poor team-building. Their original plan was to have Arnim hack into Ultron from one of the drone-minions, but he couldn't get a signal. After escaping the facility, Hawkeye sacrificed himself so that Arnim and Widow could make it out. Frustrated over the loss of her friend, she angrily asked him why he couldn't get a signal, to which he replied that the only possible explanation was that Ultron was not within the visible universe.

What If... the Watcher Broke His Oath?

In the final showdown, Arnim's consciousness had been put back into the arrow offscreen. When all hope seemed lost, Black Widow spotted the arrow, and teamed up with Peggy Carter to help shoot it into Ultron. Black Widow referred to Arnim as the "Mother of All Viruses" when Peggy asked what the plan was. While Ultron was distracted, Peggy and Black Widow scaled up the ruin in ordered to get close to him. Once they were close enough, Black Widow fired the arrow and Peggy removed Ultron's face protector in mid air. Once the arrow landed inside of Ultron's body, Arnim uploaded himself to it. He began remarking on what a nice change of pace this was. Ultron protested, saying that the body was occupied, which Arnim replied "for now, but not for long." Ultron asked who he was, as well as his objective. Arnim told him that originally his goal was to see to Hydra's domination, but because Ultron ended that, his new objective was to end Ultron. He did so by plunging green static into Ultron's system, which killed him and caused his body to fall to the ground. After his body fell, Prince Killmonger took the stones and betrayed the group. Soon after, Arnim stood up in Ultron's old body with his digital head now on the chest. He told Killmonger that the suit belonged to him, and they began fighting over it. This was when a version of Doctor Strange trapped them in a pocket reality, where they were fated to forever be dealing over the stones, sealed in an endless fight for eternity, preventing them from posing a threat to the Multiverse. 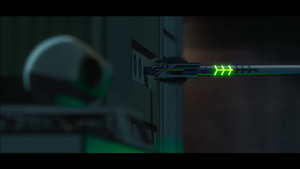 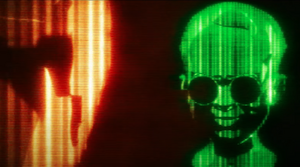 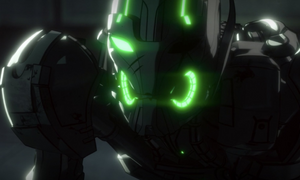 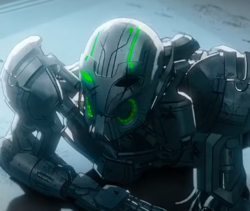