Member of the Maniax

Arnold Dobkins is a member of the Maniax and a minor antagonist in the second season of Gotham. He is a schizophrenic rapist and one of the six inmates of Arkham Asylum who were busted out by Theo Galavan.

He was portrayed by Will Brill.

At some point in his life Dobkins was brought into Arkham Asylum for poisoning and raping women.

When Zaardon is brought in Dobkins and the other inmates do not care about him until Zaardon dies and erupts in a cloud of knock out gas which narcotizes the inmates, including Dobkins. He and five other inmates are then busted out by Tabitha Galavan and brought before her brother Theo who invited them into his team, revealing that each of them has their own set of skills. When Richard Sionis denies his offer, Galavan has him killed by his sister. The other psychopaths then all accept Galavans offer. The group then refer to semselves as the Maniax.

He alongside Jerome Valeska, Aaron Helzinger and Robert Greenwood break into a ship yard, stealing a fully loaded refueling truck and kidnapping seven workers. They blindfold the workers and bring them on top the roof of the Gotham Gazette where they draw letters on them and proceed to throw them off the roof. After six men were thrown to their deaths, Dobkins wonders what they are going to do with the spare one. Jerome paints an "!" on the man, then throws him down the roof too.

When Gordon informs the GCPD about the fled inmates, he reveals Dobkins as a schizophrenic, poisoner and rapist.

When Theo Galavan meets with his Maniax after their mission, he reveals that they need to have a lesson in speechcraft, as they will be on TV soon. To prove his point he orders Dobkins to say "Good evening, Ladies and Gentlemen!" which he does in a absentminded way. Galavan is disappointed and talks to the other Maniax.

When the Maniax chose their weapons, Dobkins plays with a helmet and a gun. When Greenwoods and Jerome's fight is disturbed by Theo Galavan, Dobkins meekly states that he tried to stop them. He pushes it further by chiding the two because they are supposed to be a team.

As the next part of their plan, the Maniax kidnap a cheerleader school bus and plan to set it on fire with the fuel from the refueling truck they stole earlier. After spilling the fuel in the bus, Jerome realises that his lighter isn't working and, embarrassed, asks the chearleaders if any of them has fire. When Dobkins brings him his lighter they are disturbed by the arrival of the police, their little failure costing them time enough for the GCPD to arrive. Jerome tells his Maniax to stand their ground because the policemen cannot risk to shoot at the bus. He tells Helzinger and Greenwood to get the truck and orders Dobkins to light the bus up. The Maniax leave with Jerome continuing spilling fuel from the hose while they drive off but Dobkins is left behind. He tries to set the bus on fire but is not able to do so. Gordon grabs him and pushes him against the bus, which prompts Dobkins to drop his lighter, thereby igniting the fuel trail. To save the teenager inside, Gordon knocks out Dobkins and drives the bus out of the way.

After securing the bus, Gordon returns to Dobkins to interrogate him. To prevent Dobkins from talking he is immediately killed by Tabitha, who shoots him with a sniper rifle from a nearby rooftop. As the coroner of the GCPD Leslie Tomkins finds out that Dobkins was shot by a gun with high caliber and high velocity from some distance.

When the Maniax shoot up the police precinct, Robert Greenwood finds Dobkins body. He laughs at the fate of his former colleague and leaves the room. 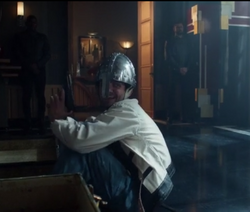 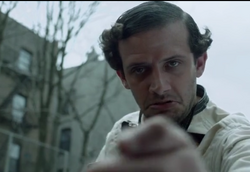 Dobkins tries to blow up the bus 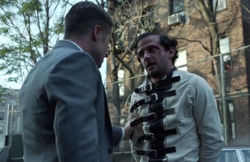 Dobkins is caught by Gordon