Fight against the Wandenreich's conquest of Hueco Mundo.

Damned Souls
Arrancars are Hollows with the ability of a Shinigami due to removing their Hollow Masks. They serve as major antagonists in the manga/anime Bleach. There are multiple ranks that tell who are the strongest and who are their subordinates. This group consists of about 47 members.

The Espada are the top-ranked Arrancar in Aizen's army, and the primary antagonists in the later half of the series. The Espada at the time of the group's introduction consists of nine males and one female. Each Espada member is chosen for their superior combat ability and then assigned a number from 0 to 9 (with 0 being the strongest, while 9 being the weakest) that indicates their rank and relative power level, which is tattooed somewhere on their body (Grimmjow's is on his lower back, for instance). Each Espada embodies an aspect of death, which ties into their personalities, beliefs and powers. The Espada are given control over the Números and are regarded as the strongest Arrancar in existence. Similar to the power gap between captains and lieutenants in the Gotei 13, the strength, speed, intelligence, and power of the Espada far surpasses that of the average Número. As Aaroniero Arruruerie notes, all of the Espada except him were at least Adjuchas-class Menos before becoming Arrancar. Nelliel Tu Odelschwanck was formerly the 3rd Espada before she was tricked and exiled by Nnoitra.

The Privaron Espada are former Espada who have officially lost their rank and are assigned a three-digit number. Being former Espada, they are far stronger than normal Números. They reside in the part of Las Noches called Tres Cifras. As mentioned by Dordoni Alessandro Del Socaccio, these former "naturally-created" Espada were rendered obsolete after Aizen began artificially creating Arrancar to meet his own standards. It is also noted that Aaroniero Arruruerie was one of the original Espada, but his original number was not mentioned since it is possible he was demoted to a lower number in accordance to the arrival of more powerful Espada.

These Arrancar are the combat specialists. They are assigned a two digit number at birth from 11 to 99 to indicate their age (Número 11 being the oldest, while Número 99 is the youngest). The basic Número uniform consists of a white-collared jacket and robes held with a black sash. However, the uniform is customizable, giving each Número a sense of individuality. The fighting ability of Números is thought to be superior to all other Arrancar, except for the Espada (current and former). 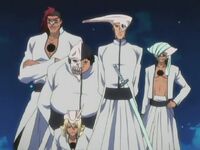 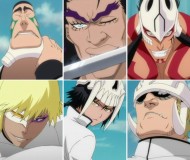 The Fracción (pronounced "frak-see-own")are a subsection of the Números that directly serve a specific Espada. The number of Fracción for any given Espada varies: Nnoitra Gilga seems to have just one, while Szayel Aporro Granz has at least a dozen. There are a few Espada that apparently prefer to fight alone, such as Coyote Starrk, Yammy Llargo, Zommari Rureaux, Ulquiorra Cifer and Aaroniero Arruruerie, who seem to have chosen not to have any Fracción under their command.

The Exequias (pronounced "ee-heck-ee-uhs") are Arrancar that are part of the execution division, apparently charged with termination of intruders and rebels. They are the equivalent of Soul Society's Onmitsukidō. Their captain is the bull-headed Rudbornn Chelute, who can spawn a seemingly infinite amount of the soldiers that form this group using his Zanpakutō.