Knocking off Arthur's armor and leaving him in underwear

Depending on games they are in.

Arremers are iconic video game enemy characters, for they are the first known enemy type 'programmed to react to players' attacks'. They are extremely agile, aggressive and can swoop players from any open directions. Arremers are the single most formidable enemy type characters who contributed majorly to GnG franchise's infamous difficulties which were already hellishly hard and players' not-so-fond memories of them. To kill them with less difficulty timing of attack on players' part is essential. In spite of its notoriety Arremers made various appearances in other Capcom-produced games, with various roles from cameos to anti-hero protagonist.

Red Arremers (レッドアリーマー in Japanese) are demonic minions that serve the rulers of hell. They are winged humanoid demons with red skin, sharp claws in the hand and feet, and wings that allows them to fly at high speed. Although they are able to release fireballs from the mouth, their preferred method of attack is swooping charge attack from above, willing to endure a few shots if it ensures the demise of their targets.

They made their debut in Ghosts n' Goblins. At first they appear relatively harmless due to their small size, it is the Red Arremer's size that gives them their strongest asset: their superior speed and very high mobility who can easily dodge any weapon thrown their way. These demons are persistent on the borderline obsession and will stop at nothing until either they or Arthur is obliterated.

In Ultimate Ghosts 'n Goblins, this red devil is the boss from stage 2-1, Storm Fortress. There is also Red Arremer hidden in the Magic Forest (a secret area), and defeating him should reveal a Light Ring.

If a Red Arremer manages to survive confrontation with Arthur for more than a minute, it will evolve into a rare white variant called White Arremer. White Arremers aren't any stronger than Red Arremers, but they're considerably more aggressive in their attacks.

One positive factor is that if Arthur leaves them undisturbed, they tend to leave Arthur alone. So players should try to find another route to bypass them and engage them only when there are no other routes to do so.

Red Arremer Kings (レッドアリーマーキング in Japanese) are derivations from Arremer species that is much faster and more durable than the standard Red Arremer from the first GnG. King made its debut in GnG sequel Ghouls n' Ghosts. It is just as obsessed as its GnG relatives, stopping at nothing to defeat Arthur. Red Arremer Kings have a tail and forehead horn, and wear a battle armor, apparently representing the species' higher status. They too avoid attacks by flying and attack by releasing fireballs from their mouth. Unlike Red Arremers, they can also summon three Blue Killers at a time to attack.

Red Arremer King also appeared in Namco × Capcom and Otoranger, and as a DLC costume for Firebrand in Ultimate Marvel vs. Capcom 3.

Red Arremer Ace (レッドアリーマーエース in Japanese) is an enemy from Super Ghouls 'n Ghosts, SNES-exclusive sequel to Ghouls n' Ghosts. This variant is the most aggressive type of Arremer species. They have grudge against Arthur and vowed to exact revenge upon Arthur who had defeated their precedessors. They have basic fire breath and summoning magic similar to Red Arremer Kings.

This massive Red Arremer is the ruler of Arremers. His intellect is far superior than human beings and he has advanced fire and energy magic which enables him to control the behaviour of his spells and fireballs at will long after being cast. Plus advanced summoning magic which enables him to summon upon other Arremers (when that happens things can get very messy for Arthur). He dons heavier battle armor and has even greater physical strength and durability, making him highly resistant to attacks but making him slightly slower than other types (still can manage to soar effortlessly and is still quite hard to hit when he focuses on defensive tactics). He also has intermediate psychic power. Red Arremer Joker first makes its debut as a boss from the Arrange Mode in the Game Boy Advance edition of Super Ghouls n' Ghosts. He guards the Village of Decay.

Red Arremer Joker also plays a major role in Namco × Capcom. Red Arremer Joker is the leader of the Demon's Blazon suppression corps, which is tasked with dealing with any potential threats to the Demon Realm Village (hence the Japanese name Makaimura), and commands several Red Arremers.

He first appears in Prologue 4, defending the Demon Realm Village from Valkyrie, Morrigan and Dmitri and giving them a chance to retreat due to them being outmatched and for them to seek the silver knight Arthur that took down the Demon Realm Village years ago. While Joker is always ensuring that things go as Emperor Astaroth desires; he feels no loyalty towards Arch-Demon Nebiroth (another Makai Emperor contender made his debut in Super Ghouls n' Ghosts), and abandons him during their battle against Arthur and his allies in Chapter 34.

He returns in Chapter 41 for a final battle against Arthur in Belcrant, and loses to the Silver Knight. Before dying, it is revealed that he is the red demon that fought in the war of the crests centuries ago in hell and put an end to the war. He says that the current situation is the same as that war, a massive conflict that could destroy the world and where people steal each other's powers, and wanted to see how the heroes that took down the Demon World Village would fight in this war, even if that meant falling in disgrace. Arthur then vows to the fallen anti-villain that he will put an end to the chaos.

Dark Red Devil, known as Red Arremer Dark in Japan, is a darker version of Red Arremer that appears in Ultimate Ghosts 'n Goblins, PSP-exclusive sequel to Super Ghouls n' Ghosts. They only appear when Hades is in charge of the hell. As is with all members of the species, the dark Red Arremers are very aggressive. It acts like the Red Arremers such as being able to spit fire and dive at Arthur, with the addition of being able to catch Arthur, rising him into the air to throw him into the ground with devastating force and effect. 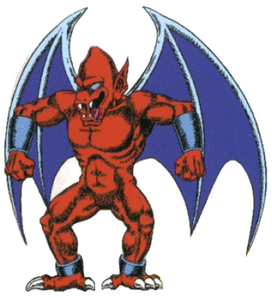 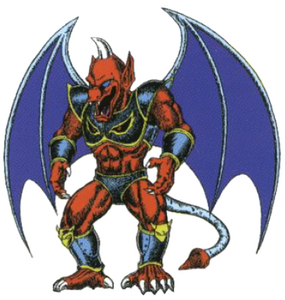 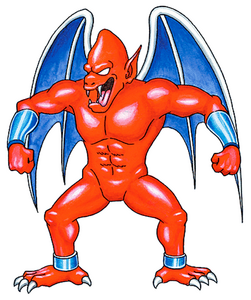 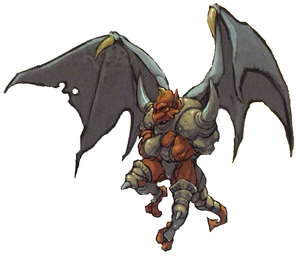 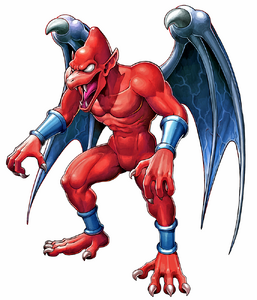 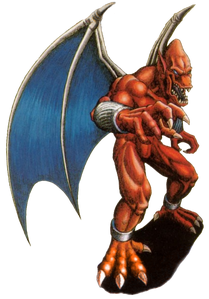 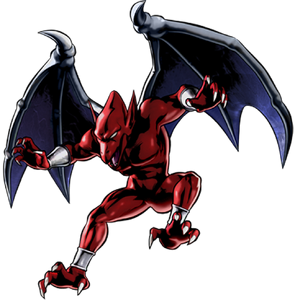 Firebrand in Ultimate Marvel vs. Capcom 3 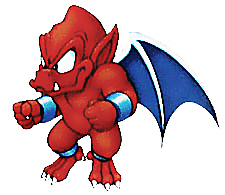 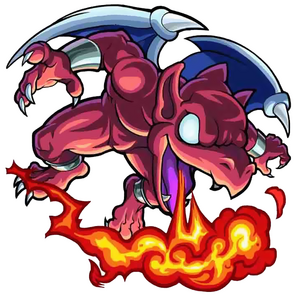 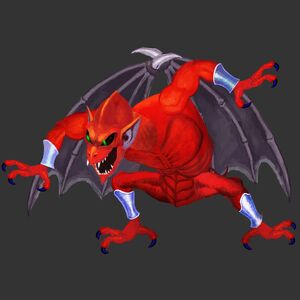