Agent of the White-Clad.
Vice-Commander of the Knights of the Ashen Flame.
Guardian of the Third Pillar.

Protect Shō Kusakabe until the day of the second Great Cataclysm.

She was the vice-commander of the Knights of the Ashen Flame, a knightly subsidiary order of the White-Clad cult that worshipped the Evangelist. The ultimate goal of the cult was to gather the Eight Pillars that possessed a link to the underworld Adolla and use them to terraform the Earth into a star.

Arrow was charged with the protection of Shō Kusakabe, the Commander of the Knights of the Ashen Flame who also happened to be the third of the Eight Pillars. She had a stern and collected demeanour and was highly dedicated to the goals of the White-Clad. Arrow was a third-generation pyrokinetic who could project high-velocity fire from a large distance away, acting like a sniper of sorts for the cult.

Arrow is voiced by Yumi Uchiyama in the Japanese version of the anime and by Tabitha Ray in the English version. Uchiyama has also voiced Puck in Re:Zero − Starting Life in Another World. Ray has also voiced Imitatia in Fairy Tail. 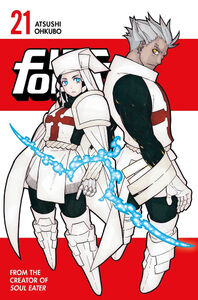 Arrow and Assault on the cover of the manga's twenty-first volume. Arrow in SPARK-AGAIN, the first opening of the anime's second season.
Add a photo to this gallery

Retrieved from "https://villains.fandom.com/wiki/Arrow_(Fire_Force)?oldid=4112354"
Community content is available under CC-BY-SA unless otherwise noted.