Spreading his virus disease throughout the Internet.

Destroy Slaughter Race, the entire Internet and wherever else it spreads.

Have Vanellope von Schweetz to itself.
Kill Wreck-It Ralph (all abandoned).

It is an insecurity computer virus that was made to duplicate and spread throughout everywhere that is to be infected, the twist being that Ralph himself is the reason behind its depraved nature.

In its original form, it was voiced by John DiMaggio, who also played Bender in Futurama, Dr. Drakken in Kim Possible, Nitro Zeus in Transformers: The Last Knight, the Joker in Batman: Under the Red Hood, Jekhide in Mia and the Migoo, Hannibal McFist in Randy Cunningham: 9th Grade Ninja, Brother Blood in Teen Titans, Toyman in Superman: Doomsday, and Hans the Puffin in The Penguins of Madagascar. Through clones of Ralph, it was voiced by John C. Reilly, who also played the original Ralph, Clayton in The Dictator, and Peter Connelly in Hoffa.

Six years following the demise of Turbo and the Cy-Bugs, the game Sugar Rush is about to be put out of order due to a broken steering wheel. Wreck-It-Ralph and Vanellope von Schweetz (the game's princess) travel to the Internet through a Wi-Fi router, where they win a bidding for a new steering wheel that will save the game, and they have 24 hours to make enough money to complete the purchase. To that end, Ralph posts several videos of himself online to get on the top trends and earn some money.

However, Vanellope takes solace in a new game called Slaughter Race and takes a strong interest. Though Ralph finally manages to earn enough money to buy the wheel (despite getting several bad reviews), he is distraught to learn that Vanellope has decided to stay in Slaughter Race rather than return back to her old game. Desperate not to lose her as his friend and thinking more about himself than Vanellope's own interests, Ralph turns over to the Dark Web, where a virus maker named Double Dan resides.

Upon hearing of Ralph's intentions, Double Dan presents him with his latest virus dubbed Arthur, warning him that it can analyze any imperfection and spread itself to other parts of its surrounding area. Double Dan also warns Ralph not to let Arthur escape the game because it would wreak havoc across the Internet if it does. Ralph releases Arthur into Slaughter Race, and it scans Vanellope's insecurities, inheriting her glitching powers and allowing itself to wreak havoc on Slaughter Race, something which Ralph did not expect. As such, Slaughter Race is forced to be shut down and rebooted, and Arthur is presumed to be deleted.

A guilty Ralph confesses his actions to Vanellope, who angrily breaks off her friendship with him as a result, much to his discomfort as he too felt that Vanellope's selfishness and desire to "go Turbo" made her guilty as well. Having survived and escaped the shutdown, Arthur secretly spots Ralph and scans his insecurities over the loss of his friendship with Vanellope and Ralph accidentally forgot about Arthur in Slaughter Race game Taking the opportunity, Arthur duplicates itself into countless clones of Ralph, scourging the Internet in a rampant search for Vanellope, crashing servers and breaking off people's connections in the process. Upon realizing what's happening, a remorseful Ralph decided to take action by luring the Ralph clones into an antivirus software (with help from Vanellope, KnowsMore and Yesss).

Unfortunately, Arthur assimilates the Ralph clones into itself, growing into a gigantic version of Ralph (known as Ralphzilla) to capture Vanellope and climb up to the top of Google Tower to keep her there. Ralph tries to stop Arthur from doing any further damage, but this only incites an angry Arthur to grab Ralph, intending to crush him to death with its fist. However, Vanellope begs Arthur to spare Ralph by promising to be its friend.

Before Vanellope can submit herself to Arthur, Ralph calls out Arthur for its selfish possessiveness towards Vanellope, and that it would be best for both of them to let Vanellope make her own decisions. This revelation is what touches Arthur to finally let Vanellope go and reconcile her friendship with Ralph, thus resolving Ralph's insecurities for good.

With Ralph's insecurities finally resolved, Arthur happily accepts its fate of being deleted from the Internet, exploding into a bright light before dissipating from existence. Ralph would later be rescued by the Disney Princesses, and the Internet is rebooted back to its normal state. Ralph and Vanellope retain their friendship despite the events and they remain close once Vanellope moves to Slaughter Race.

In its normal form, Arthur resembles a black leech-like creature with a large glowing orange eye with a yellow, diamond-shaped pupil. In its secondary form, Arthur looks exactly like Ralph, except that he has more of a red hue and circuit lines across his body. Afterwards, Arthur takes on the appearance of a gargantuan Ralph made entirely of Ralph clones.

Being a computer virus, Arthur is shown to be very wrathful and destructive in nature as it can scan any object's flaws for its own benefit. Eventually, after scanning Ralph's insecurities, Arthur becomes more ruthless as it scourges throughout the Internet, even willing to kill Ralph when the latter tried to stop him. It also proved itself to be quite obsessed with Vanellope as it intends to have her for itself and no one else. Thus, he represents how Ralph acted once he let his insecurities get the best of him.

However, Vanellope's gesture of friendship along with Ralph convincing it to let Vanellope go free is what convinces Arthur to give up its rampage; even when Ralph's insecurities are resolved afterwards, Arthur makes a genuine smile before accepting its fate of being deleted from the Internet.

As a computer virus, Arthur was able to scan any object or character for any weakness that it can exploit and spread out to wreak havoc. This was shown when it scanned Vanellope for her glitching abilities and exploited them to lay siege in Slaughter Race.

After scanning Ralph's insecurities over losing Vanellope, Arthur was able to assimilate into hundreds of Ralph clones. The clones then mention the word "friend" simultaneously (referring to their goal to have Vanellope) while crashing the Internet at the same time. Arthur would later morph the clones into a giant version of Ralph, in hopes of crashing the Internet and having Vanellope to itself. It even proved to be extremely strong as it was able to tear down buildings on the Internet, even easily capturing Ralph and almost killing him if Vanellope hadn't interfered. 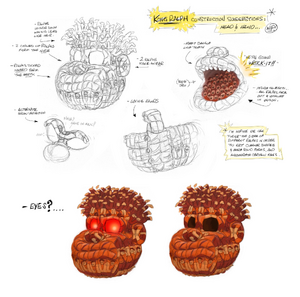 Prototype of Arthur in its Ralphzilla form, named "Kongralph" in the older concept art. 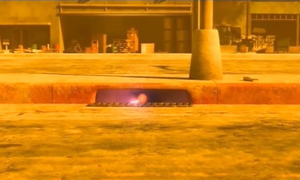 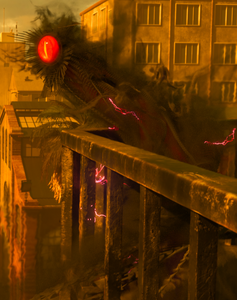 Arthur on top of a building. 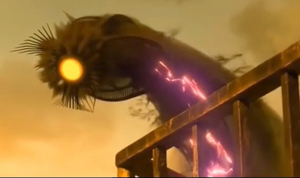 Arthur about to attack Slaughter Race after scanning Vanellope's insecurities. 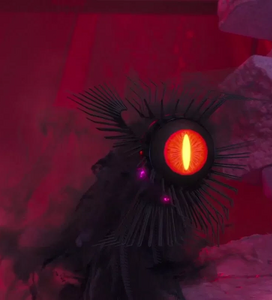 Arthur creating clones of Ralph after scanning his insecurities.

Arthur (through the clones of Ralph) going on a rampant search for Vanellope.

Several clones climbing a screen detailing a news report of Arthur causing chaos on the Internet.

Arthur (through the clones of Ralph) causing severe damage to the Internet.

Arthur fusing the clones into itself to become Ralphzilla. 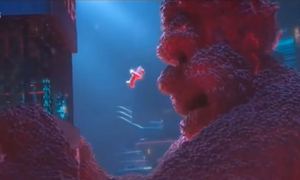 Arthur about to be attacked by an angry Ralph.

Arthur's furious breakdown when Vanellope refuses to be its friend.

Arthur's mad stare as he is about to smash Ralph for his interference.

Arthur angrily attempting to crush Ralph with its fist, much to Vanellope's distraught.

Arthur feeling satisfied when Vanellope surrenders herself to spare Ralph.

Arthur being convinced by Ralph to let Vanellope go by calling it out of its obsession towards her. 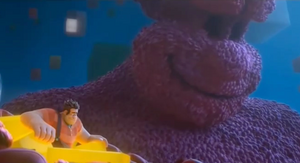 Arthur feeling relieved that Ralph has reconciled his friendship with Vanellope. 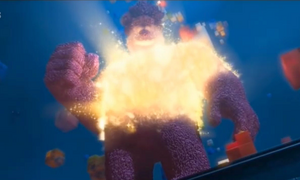 Arthur peacefully exploding into a bright light due to Ralph's insecurities being resolved by the reconciliation.