Manipulating ongoing events to get his way.

Eliminate the Shadow Client via the ICA.

Escape from his crimes (both failed).
Overthrow the Partners and take control of Providence (succeeded until his very own downfall).

He is the former Constant of Providence and the successor to Janus in the latter position. After embezzling everything from his former superiors, the Partners, he would become the new leader of Providence after their deaths. He is also the archenemy of both Diana Burnwood and Lucas Grey.

He is voiced by Philip Rosch.

Little is known about Edwards' past. In 1976, he submitted a scholarship application to the London School of Economics and Political Science. Sometime afterwards, he succeeded his mentor Janus as the second Constant for Providence.

After Lucas Grey, also known as the mysterious Shadow Client, assassinated Providence member Eugene Cobb, he manipulated the ICA into foiling some of Providence's plans, including the development of a virus weapon by Silvio Caruso, and a military coup by General Reza Zaydan to take over Morocco.

Alerted by the Shadow Client's actions, the Constant and Cobb's successor, Alexander Fanin, visited a Providence vault in New York. Upon discussing the recent events and opening the vault, they discovered that the Shadow Client had raided it and obtained information on all of their assets and operatives.

Providence immediately contacted the former ICA training director Erich Soders to gain control over the ICA's activities and deploy them in the war against the Shadow Client. However, after the hit against Sean Rose and his colleagues, the ICA discovered Soders' treachery and retaliated by sending Agent 47 to assassinate him and Providence herald Yuki Yamazaki, thwarting a transaction in which Providence was to receive a list of active ICA operatives.

After Soders was assassinated, the Constant personally confronted 47's Handler, Diana Burnwood, on a train. He promised to her that there would be no action taken against the ICA for the recent transgressions and proposed a partnership between Providence and the ICA to eliminate the Shadow Client. Diana initially rebuked it, but the Constant had persuaded her to follow his advice.

Following the assassination of Robert Knox and his daughter Sierra, the Constant was summoned by the Partners, who confidently assured that he was in control of the situation. After the revelation of Lucas' true identity, 47 restored his memory and (along with Diana) learned about Providence's role in Dr. Otto Wolfgang Ort-Meyer's projects. Thus, they joined Lucas and Olivia Hall to wage war against Providence.

Upon assassinating Janus and Nolan Cassidy, the ICA made false claims that Janus was the Shadow Client, and the Constant was escorted by the Ark Society to their base and installed a poisonous chip inside his body, which will kill him once the kill-switch was activated by Zoe and Sophia Washington, two Providence operatives and the newly appointed chairwomen of the Ark Society following Janus' demise.

After 47 assassinated the Washington Twins, Lucas managed to capture the Constant with 47's assistance. After realizing he was staged, the Constant decided to betray the Partners. He spilled about the Partners' details, and Diana discovered that they had faked their deaths and plan on resuming their lives under new identities. The Constant, seemingly unaware of this contingency plan, told 47 and Lucas to follow their bank accounts, which leads the two to the Milton-Fitzpatrick bank branch in New York.

To achieve this, 47 had managed to retrieve the data to Olivia, either through infiltrating the vault and retrieving a data core or retrieving three backup data disks carried by the bank's director, Athena Savalas, and her two subordinates: Head of accounts Fabian Mann, and Head of security Mateo Perez. In addition, Savalas was a Providence Herald, and hence 47 had her eliminated in order to prevent Providence from learning about their mission.

Whilst 47 and Grey went to New York, the Constant was bitter at Diana's betrayal and suggested that 47 was the man who killed her parents under the contract of Blue Seed Pharmaceuticals, which was also affiliated with Providence. With the data acquired from the Milton-Fitzpatrick bank, Olivia discovered that the Partners paid transactions to Haven; a corporation based in the Maldives which presented itself as a reputation management service, but secretly created new identities for wealthy criminals. In order for Olivia to successfully breach Haven servers, 47 managed to infiltrate Haven Island's HQ as a potential client and eliminated the resort's trio of owners, Tyson Williams, Steven Bradley and Ljudmila Vetrova.

Nevertheless, once Olivia had access to Haven's files on the Partners, she discovered that the Partners' controlling business shares have not been allocated to their new identities, but rather to the Constant himself, much to her confusion when she saw the name Arthur Edwards on it. Horrified by this information, Diana rushed to the Constant's jail room, only to find that he had already escaped after successfully embezzling from the Partners.

Having escaped with the aid of a bribed crew member, Arthur Edwards called Diana after 47 assassinated Marcus Stuyvesant and Carl Ingram at the Burj Al-Ghazali. Denying that he masterminded the Partners' fall from power, he hinted at larger plans. Soon later, after Grey's death in a CICADA ambush following Alexa Carlisle's death, Edwards directly approached Diana and revealed to her that 47 killed her parents, which was enough to convince to her to defect to him.

After dealing with the ICA and bidding goodbye to Hall, 47 finds Diana in Mendoza, Argentina. After she has him assassinate two high-ranking Providence Heralds, Don Archibald Yates and Tamara Vidal, in order to become the next Constant, she paralyses him with a neurotoxin and hands him over to Edwards.

Edwards brings 47 to a train known as the Mortar in Romania, preparing to wipe his memory and use him as an agent for Providence. However, 47 recovers, makes his way to the front of the train and confronts Edwards. Edwards deduces that Diana deliberately applied an insufficient amount of toxin and accepts his defeat. He then brings up the memory-wiping serum and offers 47 the opportunity to use it, which he denies. Edwards then declares that he will die knowing who he is and turns his back to 47, waiting for 47 to execute him.

47 can then choose to eliminate Edwards in any way he pleases. Following this, he proceeds to brake the train and leave on foot. With Edwards neutralized, Diana uses her position as Constant to destroy Providence from within by gradually exposing all of it's members to the world, essentially dissolving the power-cabal. A year later, 47 reunites with Diana to continue their working relationship.

On the the other hand, 47 can forcibly inject Edwards with the serum, who will yell out in shock and stumble backwards onto a chair. He declares that 47 is making a mistake before his memory is completely wiped. 47 then leaves the amnesiac Edwards sitting in confusion as he brakes the train and leaves, with the rest of the ending proceeding as usual. What becomes of Edwards afterwards is unknown.

However, in a secret, alternate ending, if 47 hesitates to inject or kill Edwards for forty-seven seconds, then he will have the option to take the serum and will be encouraged to do so by Edwards. If 47 does so, he will collapse to the floor unconscious, with Edwards thanking him and promising to take care of him. 47 will then wake up in what appears to supposedly be the same padded room he awoke from in Hitman: Codename 47, greeted by Edwards over the intercom, who presumably intends to train 47 to be a ruthless assassin again and use him to assassinate Diana and any other rivals to Providence. 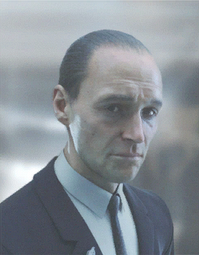 A photo of the Constant from the Providence archive in HITMAN. 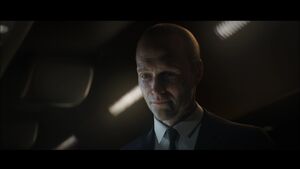 The Constant speaking with the Partners in HITMAN 2. 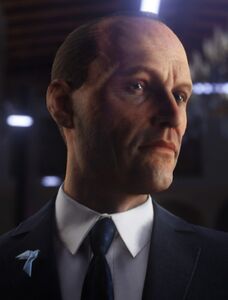 Close-up of Edwards' objective card photo in "The Ark Society" from HITMAN 2. 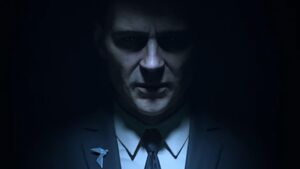 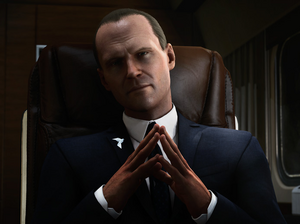