Avoid suspicion of being the Zodiac Killer (failed).

Arthur Leigh Allen, also known as Lee, is the secondary antagonist (or possibly the main antagonist) of the 2007 crime movie Zodiac based on the bestselling true crime book by political cartoonist Robert Graysmith. He is a criminal and the the prime suspect of being the Zodiac Killer in the Zodiac Killer case, as Robert Graysmith pursues the idea that Allen is the murderer.

In 1971, a friend of Arthur Leigh Allen tells the San Francisco police that he suspected Allen of being the Zodiac Killer. Allen had told him he wanted to hunt human beings for sport using a gun and a flashlight to see in the dark, and that he would call himself "Zodiac" and send letters to the police to taunt the police; as this is exactly what the Zodiac killer had been doing, San Francisco Chronicle cartoonist Robert Graysmith and reporter Paul Avery begin to investigate the case and Allen.

Graysmith and Avery look into Allen's life, and make a number of disturbing discoveries. They find that: shortly before the first documented Zodiac murder, Allen had been fired from his job as a schoolteacher for molesting his students; he often game hunted at Lake Barryessa, where the first murder was committed; and he had told a friend that he fantasized about shooting schoolchildren with a sniper rifle as they got off a school bus. Graysmith and Allen share their findings with San Francisco Police Department detective Dave Toschi, who also begins to suspect Allen.

Toschi, Inspector Bill Armstrong and Sgt. Jack Mulanax later interview Allen, who denies having the incriminating conversation, and that he gave statements to a police officer in Vallejo after the murder at Lake Berryessa to the effect that he had gone to the lake, alone, to skindive, although he met a couple there. He also asks to be called by his middle name, and claims that he had come home with bloody knives in his car after killing a chicken for dinner. Allen says that he was in Southern California in 1966 where the murder of Cheri Jo Bates took place. He also denies being ambidextrous.

Allen denies the allegations about threatening to kill children until he is asked about how he felt after being fired for touching his students. He bluntly states that he isn't the Zodiac Killer, and would refuse to tell the investigators if he were. Toschi comments on Allen's watch and asks him to hand it over, discovering that it is a Zodiac wristwatch. Allen finds out that he's likely being interviewed for his interest in the book The Most Dangerous Game, a book mentioned in one of the Zodiac's letters, and claims it was his favorite book in high school. Allen is allowed to leave shortly after the interrogation.

Toschi, Armstrong and Mulanax interview Allen's brother, John, and his wife Catherine about Allen's behavior, and they confirm that Allen had told them of his violent sexual fantasies involving children. Catherine notes that one of the Zodiac's letters spells "Christmas" as "Christmass", similar to a letter Allen sent to his brother a few years back. In 1972, Catherine notes that she and John arranged for Allen to get help from a social worker, but he only went twice, and the social worker believed that Allen was capable of committing murder. Allen also had numerous firearms, and was trained in coding and ciphering while serving in the Navy. Toschi and other investigators gain a search warrant to look through Allen's trailer, finding it invested with squirrels, gloves, military boots and guns before Allen arrives back home.

Allen's handwriting is later revealed to not be a match with either hand, confirming that he is not ambidextrous and frustrating Toschi, and he is later demoted for supposedly forging a Zodiac letter. In 1978, Graysmith interviews Linda del Buono, a friend of Darlene Ferrin, one of the Zodiac's victims. Linda claims that she and Darlene hosted a "painting party", and that she hung out with many men despite being married. However, one person who claimed to have killed somebody when he was in the Navy invited himself to Darlene's place and repeatedly brought her gifts, and a couple weeks later she was murdered. Although Graysmith assumes that the man was Rick Marshall, Linda says that he introduced himself as "Leigh".

In 1983, Graysmith tracks Allen down to a a Vallejo Ace Hardware store, where he works as a sales clerk. Graysmith takes a long look at him, and leaves, satisfied that he had found the killer, even if he could not prove it. Allen, meanwhile, appears uncomfortable under Graysmith's gaze.

In 1991, surviving Zodiac victim Michael Mageau identifies Allen as the Zodiac from a police mugshot, claiming that he is confident that Allen was the man who shot him.

A year later in 1992, Allen is found dead in his home of a heart attack before police can possibly charge him with the murders. In 2002 his DNA and handwriting are proven to not be a match to the Zodiac's, although Graysmith hasn't received any anonymous calls since Allen's death. Allen is still considered the prime suspect in the entire case and has not been ruled out as a suspect. 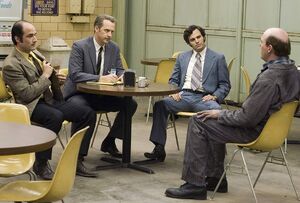 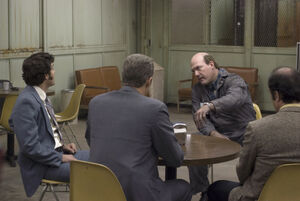 Allen working as a sales clerk until he recognizes Graysmith.