Anna and The Apocalypse

Arthur Savage is the main antagonist of the 2017 black Comedy musical film Anna and the Apocalypse. He is the power-hungry assistant headmaster of the secondary school attended by the titular protagonist Anna Shepherd and her classmates, the boss of Tony Shepherd and the eventual arena master of the horde of zombies invading the world.

He was portrayed by Paul Kaye.

Arthur first appeared as he began setting up preparations for the school's Christmas show and asserting his authority by demanding that his student Steph hand over her car keys, he then voiced his pleasure of his inevitable appointment as main headmaster of the school as his current superior was retiring. He then encountered Anna while making preparations for the show and belittled her for her father's job as a janitor and threatened to lower his current position if the show wasn't a success. During the show itself he openly voiced his displeasure for the underwhelming performances of many of the pupils to Tony who was helping him with the technical aspects of the production and was downright disgusted with the song performed by Lisa, finding it provocative and embarrassing. Leaving the technician booth in a fit of rage he suddenly heard banging against the exit doors, assuming it was one of his students he opened the doors demanding they leave the premises only to find nobody there much to his uneasiness and confusion.

The following day a zombie apocalypse hit full swing and Arthur took refuge in the school appointing himself leader of all of those with him which consisted of Tony, Lisa, Bea and several others yet only did so to further assert his own authority and give himself a better chance of survival. Soon enough the group taking refuge in the school decide to move much to the rage of Arthur who in response allows all of the zombies to enter the school killing almost everyone with the exception of Lisa and Bea who had escaped to the upper floors and Tony who he kidnapped and held hostage awaiting the return of Anna.

Eventually, Anna returned to the school alongside Steph, Nick and Lisa's boyfriend Chris only to be greeted by a lone Arthur who soon trapped them in the cafeteria swarming with zombies and began voicing his disdain for humanity through the song Nothing's gonna stop me now. The group eventually horde off the zombies and split off with Anna going to confront Savage and save her father. She reaches the auditorium where Savage is waiting with a chair bound Tony, he then forces her to endure yet another horde of zombies which she defeats with ease and reaches her father.

In a last-ditch effort to win Arthur attempts to kill both Tony and Anna before being out-witted by Anna's melee proficiency which caused a large star prop to swing in the direction of Savage knocking him directly into the crowd of zombies. Savage laughs maniacally while simultaneously screaming in agony as he is well-deservedly eaten alive by the zombies.

Savage was a cruel, mean-spirited, abusive and remorseless man full of megalomania, sadism and psychopathy. He was also very weak-willed and pathetic however something shown through his abusive and petty behaviour towards his own students. Savage is also a very mentally disturbed man who is a blatant lunatic lacking any care for any being to the point of viewing a zombie apocalypse as a good thing for humanity and a chance to enjoy himself before meeting his inevitable doom.

Savage was a tall, slender man wearing a brown tweed suit, mustard shirt, black speckled tie and chocolate coloured shoes as well as thick rimmed glasses. His skin was pale, his eyes were blue and he had short floppy, strawberry blonde hair with a matching beard. 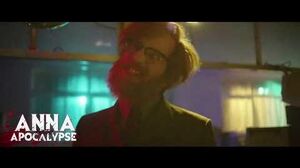 Anna and the Apocalypse Clip "Nothing's Gonna Stop Me Now" 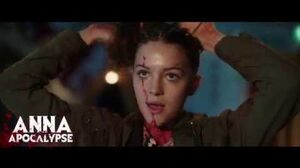 Anna and the Apocalypse Clip "Give Them a Show"