Remain a caretaker so that he can continue molesting children (in the past; failed).

Arthur Walsh is a minor but pivotal antagonist in Marvel's The Punisher, appearing in the Season 2 episode "Scar Tissue".

He was the pedophilic caretaker of the Ray of Hope group home where Billy Russo lived during his childhood. Consequently, Walsh is partially responsible for shaping Russo into the psychopath he later became as Jigsaw.

He was portrayed by Thomas G. Waites.

Arthur Walsh was a serial child molester when he worked at Ray of Hope, victimizing countless young boys under his care there; it's even implied that most of them consented to his "love". When of them—Billy Russo—fought back with a stickball bat for refusing to his advances, Arthur broke his arm and ripped his rotator cuff in three places, forcing him to give up sports entirely. Fortunately, another boy named Tommy O'Neal was brave enough to tell someone about the ongoing abuse, and Arthur spent ten years in Sing Sing. After his sentence was over, Arthur decided to simply live a quiet life at home for the rest of his days.

In the present day, Billy, a.k.a. Jigsaw—having amnesia from when the Punisher shredded his face with a mirror—goes to Arthur's home, hoping to remember his past again. When Arthur walked downstairs and saw Jigsaw, he immediately thought he was a robber and told him that all he had was the TV, telling him to take it without hurting him. When Jigsaw explained that he wasn't gonna hurt him, they instead talked while drinking coffee mixed with scotch whiskey. During the conversation, Arthur takes no responsibility for the circumstances that ruined his life nor his own actions impacting the man Russo later became as an adult, even making a racist comment by asking if a "hajji" jacked up his face. Arthur finally struck a nerve by stating that Billy "ain't so fussy or pretty anymore", resulting in Jigsaw driving a wooden stick in Arthur's heart and killing him.

Literally nobody mourns Arthur's death, with the Punisher outright saying good riddance and that he won't lose sleep over the death of some child molester, and neither should anyone else.

Arthur Walsh was not only a pedophile, but a deluded unrepentant one at that. He takes zero accountability for his past crimes, insisting he was "good" to all the children he sexually abused while also calling them ungrateful tattletales for taking away his pension. He also tells Jigsaw that whatever happened in his life ain't his fault since nobody can escape their true nature. His "love" for the kids at his former group home was clearly just perverted lust rather than genuine care, considering what he did to them.

He's shown to be reckless as well, sadistically rubbing Jigsaw's physical and mental scars in his face, which gets himself killed. He also drinks scotch whiskey with his coffee in the morning, implying he's an alcoholic. It's possible he's a racist, randomly asking Jigsaw if a "hajji" jacked up his face.

According to Frank, Arthur was at least 60 years old at the time of his death. 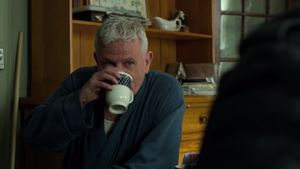 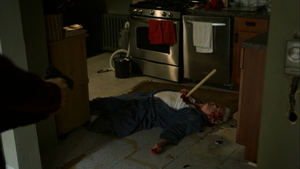