Assist Salem in her goals.

Doctor Arthur Watts is a major antagonist in the American animated webseries RWBY. He is a disgraced Atlesian scientist who became an associate of Salem and part of her inner circle.

He is voiced by Christopher Sabat, who also voices Vegeta and King Piccolo in Dragon Ball Z.

Watts is a man with short black and gray hair. He also has a mustache and green eyes. He wears a gray overcoat with yellow linings, a yellow dress shirt and a black necktie. His pants are the same color as his overcoat. His yellow-buttoned undercoat and fingerless gloves match his cordovan shoes, under which he wears yellow socks. While in Atlas he wears a blue and purple overcoat with a white furry collar.

Not much is known about Watts' past or how he joined Salem's faction, except that he was a scientist in Atlas working on the same research team as Pietro Polendina. At some point he was acquainted with Jacques Schnee as well. At a later point he was disgraced and faked his death, eventually ending up in Salem's servitude.

In "The Next Step", Watts attends a meeting at Salem's Domain with fellow associates Tyrian, Cinder and Hazel. Watts belittles Cinder for her "failure" at Beacon and loss to Ruby Rose. However, Salem arrives and chastises him for his needless "malignance". Watts is assigned to take over Cinder's duties while she recovers and meet with the group's informant in Mistral; to which he complies.

In "No Safe Haven", Watts is seen drinking tea and meeting with Salem's informant, who's revealed to be the headmaster of Haven Academy, Leonardo Lionheart.

In "Welcome to Haven", Watts eavesdrops on Lionheart's conversation with Qrow Branwen and Team RNJR. He then contacts Lionheart after they leave and tells him he needs to work on his improvisational skills.

In "Dread in the Air", Watts escorts Lionheart to a secret room to speak with Salem via Seer, and the latter informs her that Qrow arrived at Haven with Team RNJR and told them the Spring Maiden is with Raven Branwen's tribe. Salem praises her servant for retrieving this information and instructs Cinder and her team to meet with Watts and convince Raven to cooperate with them. She also instructs Watts to make a new scorpion tail for Tyrian, who lost it during his confrontation with Qrow and Team RNJR. Impressed, Watts tells Lionheart that it seems Qrow was right when he said that the children weren't pushovers.

In "Rest and Resolutions", Watts arrives at the Branwen Tribe campground with Cinder, Emerald and Mercury.

In "A Perfect Storm", Watts meets with Raven and offers her a chance of "forgiveness" from Salem if she has Vernal open the chamber to the Relic of Knowledge. He also states that her time to decide is short as the White Fang plans to attack Haven soon. However, to his annoyance, Raven demands the death of Qrow in exchange for having Vernal open the chamber for them, and Cinder eagerly agrees. Watts angrily tells Cinder he knows she's doing this to get revenge on Ruby, and warns her that if their plan falls to pieces over her grudge with a child, he won't be the one taking the blame.

In "So That's How it is", Watts attends a meeting called by Salem, who chooses to leave Cinder behind after her failure at Haven Academy. Hazel then informs her the Ozpin has reincarnated, causing her to send Watts and the others away before unleashing her rage.

In "A New Approach", Watts is seen walking through the streets of Mantle, he and Tyrian have a brief argument about how one hideout makes them susceptible to discovery and that they need to stay mobile. He reassures Tyrian by telling him the security in Mantle is outdated and that he wrote the code, allowing him to hack the security cameras, and allowing he and Tyrian to walk freely.

In "Pomp and Circumstance", Watts arrives at the Schnee Manor. There, he proposes to Jacques that he has a plan to help him win the election as well as help his company.

In "A Night Off", Watts and Tyrian sabotaged Robyn Hill's victory party. Working from the shadows, Watts hacked into the building, cutting the power, and altering the security camera footage to make it as if Penny was massacring Robyn's supporters and not Tyrian. He even placed more votes to Jacques' name. Shortly after Tyrian made his escape, Watts resumed power to the building, and uploaded the fixed footage of Penny.

In "Cordially Invited", Watts is seen standing on top of a building overlooking Mantle as he shuts down the city's power. As the rain turns into snow, Watts discards his umbrella into the city streets as he disappears.

In "As Above, So Below", Watts and Tyrian watch the people of Mantle run amok and loot the dust stores.

In "Out in the Open", Watts and Tyrian watch Ironwood and Robyn Hill expose them for the recent murders and for the rigged election. On his scroll, Watts looks at the schematics for the Amity Colosseum, and is dumbfounded how Ironwood had gotten that knowledge past him. Infuriated, Tyrian yells out that the Grimm should have destroyed their enemies, not made them friends. Watts decides to go to Amity Colosseum to sabotage it. While sending Tyrian to create more chaos in the Grimm attack. In Amity Colosseum, Watts talks to himself about how unfinished Ironwood's project is, only to find out that it was a trap set by the general himself. Using his hacking rings, Watts transforms the arena. Evading Ironwoods gunshots, Watts makes his way to one of the levitating platforms, and draws his revolver.

In "Gravity", during their battle, Watts uses his rings to manipulate the colosseum's terrain to attack and evade Ironwood. Ironwood gives chase to the disgraced Atlesian scientist and eventually catches up to him. The two engage in hand to hand combat, Watts uses the wall to jump over Ironwood and to resume the chase. Watts uses the hard light shields to make a bridge allowing him to cross to the next platform. He uses his rings to create a lava wall, thinking he either killed or simply evaded Ironwood, Watts smirks with satisfaction. Only to be shot in the shoulder by the general himself.

Watts retaliates by shooting general Ironwood in the leg with ice dust, and jumps up to the platform above them. Ironwood frees himself and launches himself up to where Watts is. Ironwood charges at Watts, the two proceed to fall back to the main platform. Watts angrily claims Ironwood never appreciated his work, and that he chose Pietro over him. Ironwood gains the upper hand in their fight and pins Watts to one of the metal beams. However, the tables quickly turn as Watts man handles Ironwood and traps his left arm into a hard light shield.

Ironwood begins to pull his arm out, in a mocking tone, Watts tells him that he shouldn't do that, not unless he wants to add more metal to his body. Proving Watts wrong, Ironwood frees himself and charges at Watts. He is grabbed by the collar of his shirt and is dragged towards the edge of the floating platform. Ironwood angrily claims he is willing to sacrifice everything to stop Salem, to which Watts retorts he hopes he does. After their battle, it is unknown if Watts survived.

In "The Enemy of Trust", Watts is revealed to have survived his encounter with Ironwood and is seen sitting in what is presumed to be a prison cell. Looking defeated he gazes up at the sky turning violet and his hopes seem to rekindle.

Watts appears as a Legendary unit in RWBY: Amity Arena. He is a ground melee unit that can hack into enemy structures, including turrets, and disable them for a brief period of time.

Watts is formal and speaks in a refined accent. However, he was also arrogant and condescending, even to his allies. However, he is humble enough to admit not to take credit he didn't achieve by himself, as when Salem initially thought he found out where the Spring Maiden is, he reveals it was by Qrow when he spoke to Leonardo.

Watts states that he has a low opinion of failure, which apparently extends to Cinder Fall after she was defeated by Ruby Rose. He criticizes and belittles Cinder and enjoys provoking her, especially since she cannot talk back. He also looks down upon her underlings, Emerald Sustrai and Mercury Black. Salem chastises him for his needless "malignance". However, he avoids speaking out of line in Salem's presence.

Arthur also has a tendency to become overly excited about new topics of study. Case in point, when he and Lionheart were reporting to Salem about the location of the Spring Maiden, Arthur showed immense interest in the Seer Grimm.

However, beneath his refined and proper image lies a streak of callousness and cruelty, as he masterminded the events of both the Fall of Beacon and the attack on Mantle and Atlas, showing no sense of concern for being involved with the deaths of innocents. As more of his backstory is revealed, it is implied that his heinous actions and motivations are not relatively out of loyalty to Salem but rather out of petty jealousy of Pietro Poldenina for the latter's success as well as resentment towards James Ironwood for looking down on him, making his actions disproportionate to his motivations compared to his peers, such as Tyrian who is completely loyal to Salem, and Hazel who suffered a personal loss under Ozpin.

Watts possesses a genius intellect and expertise in technology and computer systems, and is responsible for creating Mantle's entire security network back when he was still an Atlesian scientist. He was able to develop a virus that allowed Cinder to hack into the CCT tower and rig the Vytal Festival tournament, as well as Roman to hijack Atlas' Atlesian Knight-200s that were stationed in Vale. He also created a new stinger for Tyrian Callows after his old one had been cut off by Ruby Rose.

He uses special rings on his fingers that can let him hack into systems around him, so long as he has the code of the cyber security he wants to infiltrate, allowing him to be mobile and making it difficult to track him down. The rings can also generate hard-light Dust shields to defend him and makeshift platforms to walk across long gaps.

Watts also has some decent skill in combat and uses a 20-shot double-barrel revolver as his weapon of choice. 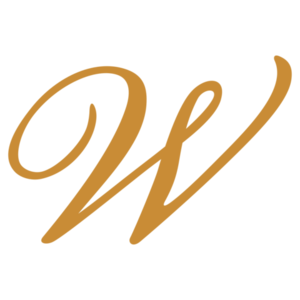 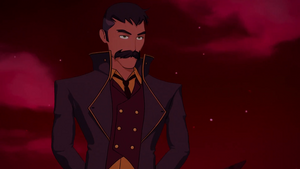 Watts in the Volume 4 Opening. 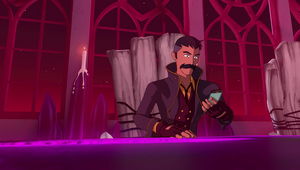 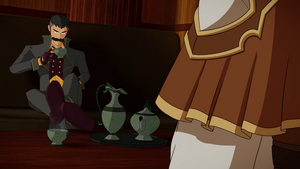 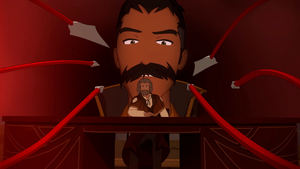 Watts in the Volume 5 Opening 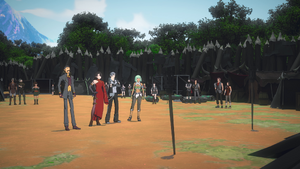 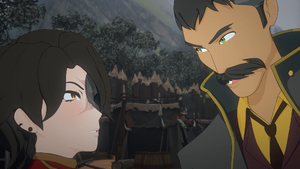 Watts warns Cinder not to ruin their plan over her grudge with Ruby. 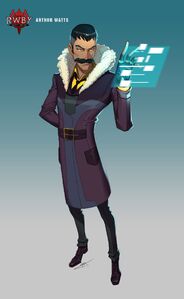 Watts as he appears in RWBY: Amity Arena. 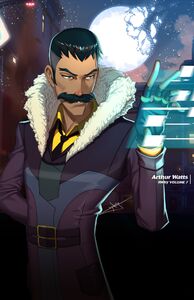 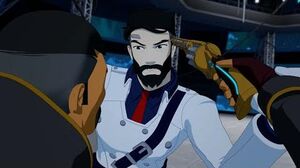 RWBY Volume 7 - Ironwood vs. Watts
Add a photo to this gallery

Retrieved from "https://villains.fandom.com/wiki/Arthur_Watts?oldid=3997507"
Community content is available under CC-BY-SA unless otherwise noted.