Villains Wiki
Register
Don't have an account?
Sign In
Advertisement
in: The Simpsons Villains, Comedy Villains, Cartoon Villains,
and 44 more

Marry Marge Simpson (failed in the Simpsons Universe, but succeeded in Treehouse of Horror XXIII).

Arthur "Artie" Ziff is a recurring antagonist in The Simpsons and the unseen overarching antagonist of its 2007 theatrical film The Simpsons Movie. He is Marge's ex-boyfriend from high school. He has frequently attempted to get Marge to dump Homer for him and he often attempts to kiss her. He is the main antagonist and later an anti-hero of the Season 15 episode "The Ziff Who Came To Dinner"; and returns as one of the two main antagonists in the Season 24 special "Treehouse of Horror XXIII".

He was voiced by Jon Lovitz, who also played Emperor Tod Spengo in Mom and Dad Save the World, The Peeper in Little Nicky, T.R. Chula in An American Tail: Fievel Goes West, Mr. Marks in The Producers, and Quasimodo Wilson in Hotel Transylvania.

Artie met Marge in high school while he was president of the debate club and invited her to prom after she refused Homer's offer of going to prom with him. However, he ruined the date after he tried to have sex with (and possibly rape) Marge, who kept refusing, which also resulted in her dress is torn, leading her to furiously reject him.

Artie eventually attended the Springfield High School reunion for the Class of 1974, where he revealed he had become very wealthy.

Years later, Artie appeared on television, where local news anchor Kent Brockman revealed that Artie had become the fifth wealthiest man in the country, thanks to a product that changes modem noise to music that was manufactured by his corporation, Ziffcorp. After Marge writes him a letter (that, unfortunately, got rewritten by Patty and Selma, Artie invites her to his mansion and tries to seduce her, by hiring numerous people to recreate prom night for him and Marge in order to redeem himself.

Marge's fun doesn't last until he forcefully kisses her during the dance and unknowingly causes Homer to witness the kiss and ultimately consider suicide as a result while working at an oil rig. Artie redeems himself by apologizing to them both and telling Homer that Marge will never divorce him despite Artie's billions.

However, Artie's worst act would be committed in "The Ziff Who Came To Dinner" where it's revealed he has been living in the Simpson's attic without their knowledge with Artie believing that Marge was his true love. Marge, however, quickly points out that she and Artie only had one date where he wasn't a much gentleman as he tried to force himself onto her and almost raped her on their high school prom night. Meanwhile the Simpsons reluctantly allow Artie to stay with them until he gets back on his feet.

However, Artie's real reason for living with the Simpsons was because he is wanted by the Security & Exchange Commission after spending his Ziffcorp shareholders' money for personal items. Artie betrays Homer by proclaiming that Homer owned 98% of Ziffcorp (after Homer had won the share through gambling) effortlessly causing Homer to be sent to prison but Artie, feeling remorseful, admits he was the original owner of the stock, and gets Homer released from prison. There, he was arrested and put in the jailyard.

Although Artie angered the prisoners by damping their cigarettes (which caused them to surround him to possibly beat him up), he survived prison and was eventually released, as his name is shown on a list to get revenge on Mr. Burns. It is unknown what happens to him after.

Artie appears as a major antagonist in the third segment of Treehouse of Horror XXIII, Bart and Homer's Excellent Adventure. When Bart travels back in time to 1974, he meets young Marge when she met Homer. When he sees on his phone pictures of him in a future where he is wealthy, he tells Marge to avoid marrying Homer.

Taking Bart's advice, Marge marries Artie Ziff. It is unclear if Artie's company, Ziffcorp, exists in this alternate universe, but it is likely that Ziff himself remains the wealthy tech entrepreneur that he was in the original universe. In the 1990s, Marge and Ziff have three children: Bartie Ziff (Bart), and two unnamed daughters (Lisa and Maggie). The Ziff counterparts of the Simpson family are much more rich and successful. However, current-day Homer Simpson and teenage Homer arrive at Ziff's mansion. Artie and Bartie fight them off with Brazilian Jujitsu. However, Marge sees the Homers, and realizes she DID marry the wrong man. Marge kisses Homer, and divorces Artie. Marge then marries Homer, who becomes an essential step-father to Bartie, Lisa, and Maggie.

It is unknown of Artie Ziff's fate in this universe, but it is possible that he followed his original fate in the series and was arrested for fraud. In an alternate cut of the episode, the timeline where Artie and Marge marry is erased when Marge kisses Homer. Thus, Artie begs Marge to kiss him one last time before fading away (and presumably returning to the old timeline where he never romanced Marge successfully).

Artie Ziff as a teenager 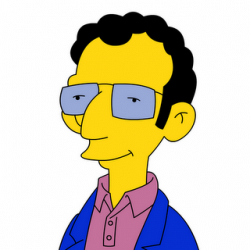 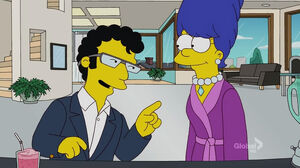 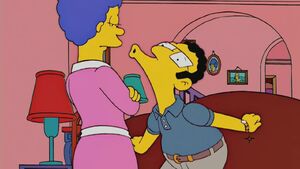