Destroy anyone who has more notebooks than him.

Arts and Crafters is the secondary antagonist of Baldi's Basics In Education & Learning and the Field Trip Demo.

Arts and Crafters is a shy and insecure character, and usually keeps to himself. He does not like being looked at and, during most of the game, will just avoid the player and the other characters as much as possible.

Arts and Crafters will instead become a barrier to the player as he will come out and start attacking the player if they reach into the NO ENTERING zone, He will endlessly attempt to attack the player until he gets you, which will put the player back into the fireplace which might put you in danger if Baldi is active. He will also take away sticks from the player when he catches them.

Arts and Crafters stands stationary, sitting next to the conveyor belt. Much like before, he will attack once the player collected all eight notebooks. Once he reaches the player, he runs rapid loops around them before warping the player to another part of the level.

Arts and Crafters is described as shy and insecure, even to the point of not liking to be looked at. He avoids contact with anyone, and usually just scurries along trying to be avoided and ignored. If he does encounter the player or another character, he will simply run past them in a silent manner. However, after collecting more notebooks than him, his personality changes drastically, becoming violent, dangerous, determined and hostile. He becomes one of the most difficult enemies to avoid, and will help Baldi catch the player if he catches up. 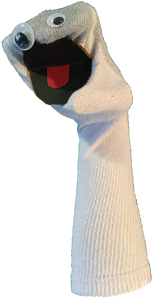 An enraged Arts and Crafters attacking. 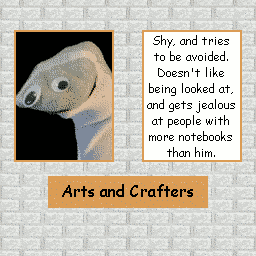 Art's and Crafters's poster description in the Principal's office.