Serial killer
Art teacher (all as a human, all formerly)
Animatronic performer

Making art with his victims blood.

Paint the world with his victims blood (failed).

Kill and devour everyone (succeeded for two victims, but failed in killing the Janitor).

He is an animatronic alligator who was once a friendly children's entertainer and later gets possessed by a serial killer in devouring everyone along with Willy Weasel and the other animatronics.

He was portrayed by Christopher Bradley, but wasn't voiced.

Arthur Allen was a art teacher who, for unknown reasons, went insane and became a spree killer, murdering people and then drawing pictures on the wall with their blood as he claimed the world was a blank canvas that he need to give color with each person he kills. He was also notable for maiming his victims by biting them. After being caught, he was sent to the same asylum Jerry Robert Willis was sent, who he later befriended.

In 1996, Arty Alligator was once a friendly animatronic along with Willy Weasel and others. However, Jerry Willis, the original owner of Willy's Wonderland, and his team of serial killers wear some character costumes to kill some children in a party room, and everyone gone panicked. Later at night, Jerry and the killers killed themselves in a Satanic suicidal ritual before the authorities arrived, preventing from being captured. After that, their souls had been transferred into the animatronics, including Arty.

Ten years later, Willy's Wonderland was reopened by the new owner, Tex Macadoo, to keep the people unaware of this horrific past. Suddenly, Arty (possessed by a serial killer) and the other animatronics have man-eating behaviors to attack and even devour children. After the children were seriously injured, Willy's had been permanently shutdown once again.

In this present, the quiet protagonist is hired to be the janitor at the old abandoned Willy's Wonderland to clean everything for the rest of the night so his car's wheels will be fixed by the next morning. After midnight, Arty and the animatronics become active and go out to kill their latest victims, leaving Willy on the stage.

Liv Hawthorne crawls into the ventilation to find the Janitor, but Arty appears to chase her. Liv gets out of the vents, and Arty falls back.

Later, Bob McDaniel and Kathy Barnes are having sex in the Super-Happy Fun Room, and Arty appeared out of nowhere and devours Bob alive in a gruesome way. When Kathy tries to open the door, Arty quickly kills her before the Janitor and Liv arrive. Upon seeing the two, Arty charges towards them, ready to attack, but is flipped onto his back by The Janitor, who fights and kills the robotic alligator by tearing his jaws open wide and tearing out his circuit and tossing it to the side before declaring it trash. This treatment would also be shared with Ozzie Ostrich and Gus Gorilla. After the fight, Liv sorrowly apologizes to Kathy and Bob's dead bodies for being unable to save them in time. 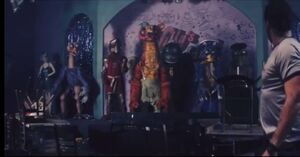 The Janitor beating up Arty. 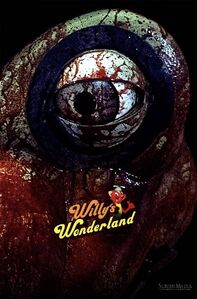 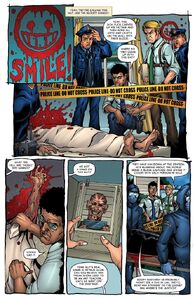