Arvis is the central antagonist of Fire Emblem: Genealogy of the Holy War. After the death of King Azmur, he becomes the emperor of Grannvale.

Arvis is said to possess the "gift of Kings," a talent and toughness that he had even as a child, allowing him to lead Velthomer at an early age after his father's suicide. He is largely manipulated by Manfroy because he has minor Loptous blood, making him the key to Manfroy's dark ambitions.

He was voiced by Sho Hayami in the Japanese version, and by Xander Mobus in the English version.

Arvis was the son of the duke of Velthomer, Victor, a womanizer who cared little about his family, and Cigyun. When he was 7 years old,  he beame the new duke of Velthomer after his father killed himself after learning that Cigyun was having an affair with Kurth, the crown prince of Grannvale, and his mother disappeared, leaving Arvis with Cigyun's maid and her son, Arvis' half-brother Azelle. Despite Azelle being born after his mother was raped by Victor, Arvis deeply cared for his half-brother, saying that Azelle is one of the most important things in his life. Even at a young age, Arvis became a strong and charismatic leader and maintained a firm hold on Velthomer

By Grann 757, he had been appointed the leader of the Weissritter royal guard at Belhalla, the captial of Grannvale, and was tasked with taking care of King Azmur during the war with Isaach.

When soldiers from the neighboring kingdom of Verdan invaded the dukedom of Jungby, Arvis is sent to stop the invasion, only to learn that a small group of soldiers led by Sigurd, the son of the duke of Chalphy, had stopped it before he got there. After talking with Sigurd, Arvis gave him a Silver Sword, and, having learned that Azelle had joined Sigurd's army, entrusts his brother to Sigurd. Afterwards, he returned to Belhalla.

During this time, Arvis contacted a dark bishop named Manfroy, who would help him, in exchange for Arvis not persecuting the Loptyrian Sect. The time to pull off his ambitions came when he learned that Prince Kurth was assassinated, and Duke Vylon of Chalphy and Sigurd were framed for the murder by Duke Lombard of Dozel and Duke Reptor of Friege, the real culprits. Arvis, however, thought more than just hunting Sigurd the traitor. He planned to make the other lords fight for each other, claiming the lands in Jugdral on the way, and kill them once they were weakened. He stayed close to King Azmur and acted as his loyal attendant. During this time, he had an affair with his confidante Aida, with whom he would have a son named Saias.

One day, he encountered a young woman named Deirdre outside of Belhalla, who reminded Arvis of his mother. After Deirdre was recognised as the heir of Grannvale by Azmur, she and Arvis fell in love and became engaged, with Azmur's blessing. In addition, Arvis was chosen to be Azmur's heir, where he would be given the position of Emperor until his son grew old enough to succeed him. In Grann 760, in preparation for Sigurd's attempt to return to Grannvale after having been in exile in Silesse, Arvis dispatched the Velthomer army under Aida to Phinora Castle to support Langobalt and Reptor's forces. However, when Sigurd's army approached Velthomer itself, as per Arvis's orders, Aida turned on Reptor and his men and, with Sigurd's help, defeated them. Following this, Aida led Sigurd's army to Belhalla, claiming that Arvis knew he was innocent and that Arvis had arranged a formal celebration of Sigurd's return.

Arvis and his forces welcomed Sigurd's army at Belhalla. with Sigurd hoping to tell King Azmur the truth about what really. However, tduring their talk, Arvis sentenced Sigurd and his men to their deaths, beginning what would be known as the Battle of Belhalla. After taunting Sigurd by allowing him to see Deirdre one last time to check to see whether she was in fact his wife, which was cofirmed by Sigurd, Arvis used his personal tome, Valflame, to kill Sigurd while his forces cast a mass-Meteor shower to seemingly obliterate the rest of Sigurd's army. Following this, he investigated Deirdre's past and discovered that she was in fact his half sister, but his feelings for her never changed.

With the death of Sigurd, Arvis remained the sole power of Grannvale, and was eventually crowned as Emperor. He successfully created a peaceful regime in Grannvale that lasted for ten years, and had two children with Deirdre, Julius and Julia. After this, the situation began to go downhill.

Manfroy offered Julius the Dark Tome of Loptyr. After he read it, Julius was taken over by Loptyr and thus started to change into a twisted man, his first act being killing his mother, Deirdre, though she warped Julia to safety. Even Arvis was unable to stop him, as Julius was bred to be the next Emperor of Grannvale, as Azmur decreed so. Arvis was helpless as he saw his Empire changed from a peaceful regime into an oppressive one, where children were being hunted to be sacrificed for the Dark Lord and any whole population of anybody who resisted was exterminated as a measure to combat potential resistance.

Eventually, Arvis realized that he had been manipulated all along by Manfroy. However, he still did his best to prevent casualties in the child hunting as much as he could. Eventually, he would face the Liberation Army led by the son of Sigurd, Seliph. He decided that he would face death in battle and led the defense of Chalphy Castle, but not before he sent out a bishop to take away Sigurd's sword, Tyrfing, which was later retrieved by Seliph. Arvis is eventually killed by Seliph's hand, avenging Sigurd. However, after the Holy War truly ended, Seliph realized that Arvis was nothing more than a man swept away by fate and did not deserve his hatred. 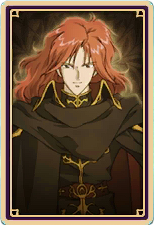 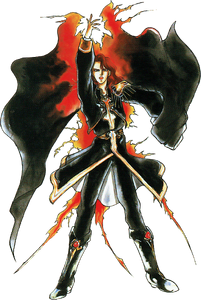 Arvis in Fire Emblem: Genealogy of the Holy War. 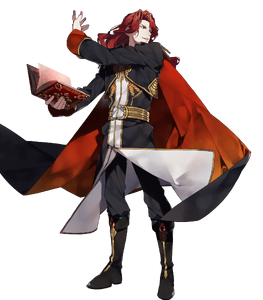 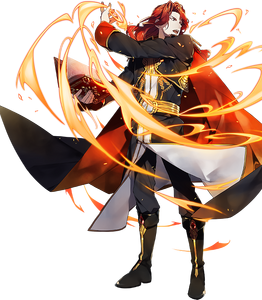 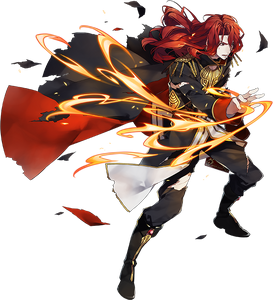 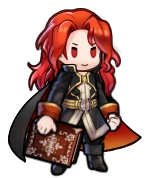 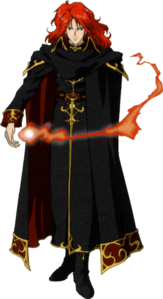 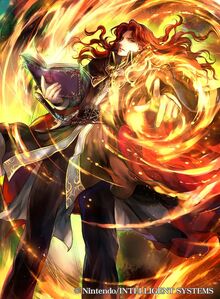