King of the Underground and MonsterKind (Undertale)

Skilled use of his trident

Pretending to be Santa to the underground monsters.
Drinking tea.
Eating cinnamon-butterscotch pie.

Acquire seven human souls to become a god and break the barrier. (failed).

Use godlike powers from the human souls to destroy humanity. (abandoned)
Escape the Underground alongside his people.
See Toriel again.
Make peace with humanity (all succeeded in the True Pacifist ending).
Get back together with Toriel (Deltarune: Ongoing).

Although he is built up through the entirety of Undertale as the main antagonist, when confronted, he reveals himself to be a kind and cheerful, yet sorrowful and regretful king who feels that he can no longer betray his promise to his people. Unlike the apparent person of Flowey, Asgore is an anti-villain, though while he is plagued with guilt and regret, he is still the main obstacle, ordering the Royal Guard to capture humans like Frisk, and in the end fighting the protagonist himself.

Despite Toriel claiming that he's a ruthless predator that will do everything in his power to get Frisk killed, be it by his hands or another monster's, Asgore has been described as both as a pushover and soft by Papyrus and Undyne respectively. He is very friendly to everyone he meets, cares deeply for his subjects and loves gardening. He is not a killer at heart, as seen during the fight with him, where he apologizes for having to kill Frisk and does not look them in the eye during the fight. He is also shown to not be committed to going through with his plan, wanting to stay in the underground under the faint hope that seven more humans will not fall there and that his plan won't come to fruition.

As the king of monster-kind however, Asgore was saddled with the responsibility of his people and likely wanted to give them hope that they wouldn't be trapped in the Underground forever. Thus his act of murdering humans was for the sake of those he cared about, even though it was wrong of him. Asgore also had a loving relationship with his wife Toriel, and deeply cared for his son Asriel and his adopted child. After the death of both his children and swearing revenge against humanity however, Toriel divorced him and left feeling disgusted and betrayed by his actions. While Asgore is in no way evil, his mistakes and choices were definitely too dire to overlook.

In truth, Asgore never wanted to hurt anyone but was forced to take action and make horrible mistakes for the sake of his kingdom. While he could have done things differently, the grief of losing his children and the duty he had as king caused him to act irrationally. Despite all this however, he still retains his kind and friendly attitude towards his people and even Frisk, as he allowed the fallen child to do whatever they must before proceeding to the Barrier in order to fight. Given that Frisk knew they had to fight, Asgore tried to be as kind and calming as he could to assure that they were less afraid of facing him, telling them to just think of it like a trip to the dentist.

After the death of Chara and Asriel, he swore in a fit of anger that any human that fell into the underground would be killed and once he had collected seven human souls, he would use those souls to become a god and wipe out humanity. His wife, Toriel became disgusted by his declaration and left him, Asgore himself being unable to rescind his declaration due to it restoring hope to the underground which almost fell into despair again with the deaths of Asriel and Chara.

At some point between his declaration of war and the events of the game he encountered Flowey in his garden, and took care of him for some time before Flowey left on his own. Asgore is the one who killed all the humans before Frisk fell into the underground.

In the neutral route, he serves as the penultimate boss (final boss if Flowey had already been defeated in a previous run). When Frisk encounters him, he greets Frisk and states that he would offer Frisk a cup of tea if they wouldn't have to try to kill each other soon. He tries to comfort Frisk at what is about to happen soon and even allows Frisk to leave and undergo any unfinished business before they fight. During the fight itself, he states that he is glad to have met Frisk before breaking the mercy button so that the player cannot spare him. At the end of the fight, the player can choose to finish him off or spare him. If the player chooses to spare him, then he says that he will end his declaration of war, try to reconcile with Toriel and take care of Frisk as a family. If Flowey has not been fought before, then Flowey kills him. If Flowey has been fought before, then Asgore realizes that all of that is impossible. He requests that Frisk take his soul, go to the surface and try to find a way to free the monsters before committing suicide.

In a pacifist route, before they can start fighting, Toriel stops him with a fireball. At first overjoyed to see Toriel, he is rebuked by her when she states that he could've gotten six more souls from the humans after the first, but was too cowardly to carry out his plan. During the reunion with everyone, he gets grabbed by Flowey. After protecting Frisk from Flowey, he gets absorbed by Flowey, who becomes Asriel. During the fight, the player has to save him after his memory is wiped. After restoring his memories, Asgore declares that "You are our future". After the fight with Asriel, the whole group leaves the underground. In the credits, Asgore can be seen trimming a hedge into the shape of Papyrus' head in front of Toriel's new school. It is implied in the credits that Asgore does manage to reconcile with Toriel.

Like in the other routes, Asgore is met in the throne room, having been warned by Flowey. He tries to talk down the player but gets killed by a sneak attack from Flowey.

Asgore used to be the chief of the police force, but he left for unknown reasons. Afterwards, his wife Toriel left, and took their kids, Kris and Asriel, with them. Asgore is trying to get back together with her, but never succeeds, and is losing money because he keeps giving flowers at his flower shop away for free. 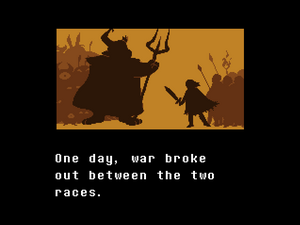 Asgore in the intro of Undertale. 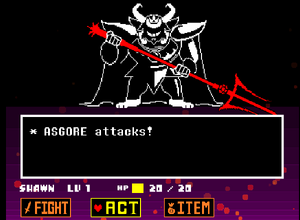 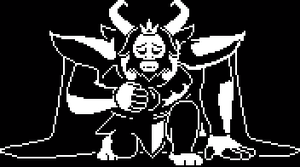 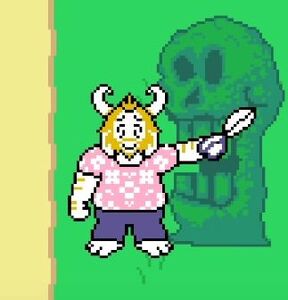 Asgore becomes a gardener on the surface after the events of Undertale in the True Pacifist Route. 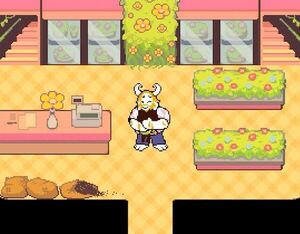 Asgore in his flower shop (called "Flower King") in Deltarune.