Ash is a minor antagonist in Adventure Time. He is a Wizard who was Marceline's immortal ex-boyfriend.

He was voiced by Steve Agee, who also played Gef in Guardians of the Galaxy Vol. 2 and King Shark in The Suicide Squad.

The reason for the break up was because he sold her teddy bear Hambo to a witch so he could get a new Cherry Blossom Wand. He later disguises himself as the Rag Wizard, and dopes Finn and Jake into helping him obtain the memory of Marceline dumping him in the pretense that she put herself in a sleeping spell, and would remain asleep for eternity if they didn't get the memory. When they return the memory to him, he destroys it, so that Marceline would not remember dumping him. He then goes into Marceline's house and asks for dinner.

He later returns when Marceline's memory comes back to her, and of the bat asks her for a sandwich, not caring in the slightest for trading her teddy bear in exchange for the wand. Finn, Jake, and Marceline then dogpile on him, Marceline kicks him in the groin, and Jake finishes it by forming a humongous foot and stomping on him. He only appears in the episode "Memory of a Memory."Adam Muto confirmed he is still alive.

He was mentioned in "Sky Witch" by Princess Bubblegum who was Talking to Maja about him selling Hambo to her. Which she refers to him as a "Weinus".

He made a brief cameo in the Season 5 episode "Betty" in which he appeared in the Wizard City and talked badly to the reformed Ice King/Simon. Simon then punches him off his flying carpet, and he rides it to his Ice Kingdom in hopes of contacting Betty.

He is mentioned in "Broke His Crown" when Marceline was talking to Simon about him, which Simone claiming that he outta punch him, which ironically he did in "Betty."

He appears near the end of "Gumbaldia" as a member of Uncle Gumbald's Legion of Candy Kingdom Haters who plan on going to war with the Candy Kingdom.

In "Come Along With Me" Ash witnesses the arrival of GOLB and runs away with Gumbald's army after Aunt Lolly asks for help to fight GOLB. 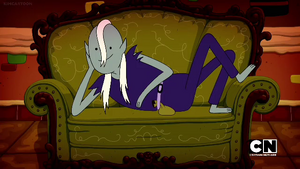