Ash Landers is a character introduced exclusively in the original anime adapation of the manga series Black Butler/Kuroshitsuji. He is an angel and the male counterpart to Angela Blanc and acts as Queen Victoria's butler and aide. He is arguably the primary antagonist of season 1 (along with Angela Blanc) and a minor antagonist in season 2.

He is voiced by Satoshi Hino in Japanese version, and by Chuck Huber in English dubbed version, the former who also voiced Ainz Ooal Gown.

Ash first appears beside Queen Victoria at the curry contest, relaying small speeches from her to the audience at large. When Mina and the crowd break out from eating curryma, he does not seem concerned about it, but finds it interesting that some audience members are not affected, as he states that there is no human whose heart is free of darkness. His musings lead Ciel Phantomhive to wonder if the reason for this is because those who ate the afflicted curry had Sebastian's curry shortly thereafter, negating the curryma's effects.

Ciel relays this to Sebastian, who force-feeds his curry to the affected and saves the audience. Afterward, the queen declares him the winner, and Ash approaches Ciel and personally congratulates him on his victory, promising to get the Royal Warrant to him soon.

Ash appears briefly at the Phantomhive manor to inform Ciel of the cult and to request that he either disband or eliminate it, on behalf of the queen. However, he leaves the option of what to do up to Ciel, and takes his leave shortly afterward.

He first appears at Ciel's house, to ask that he retrieve an important item from John Stanley's corpse. However, he later frames Ciel and Lau for drug trafficking and has them arrested by the Scotland Yard. He is next seen at the Exposition, explaining that he came into contact with the queen after her husband's death and he is helping her purify London. He attacks Ciel on the queen's orders, but is stopped by Sebastian. Sebastian and him duel briefly, but cut the fight short, lest they injure the citizens below.

Shortly after, the queen complains to him about being in pain from Albert's rotting flesh. He attempts to purify it, but she refuses, stating that she is already pure. Finding her delusions annoying, he abandons her, and Ciel later blames him for her death. After he flies away, he goes to the Phantomhive manor and retrieves Pluto, forcing him to set most of London on fire.

While London is on fire, he encounters Sebastian, who has abandoned Ciel. He suggests that they join together, which initially confuses Sebastian. However, he reveals that he is also Angela. This noticeably disgusts Sebastian, who deserts Ash/Angela, and rejoins Ciel after he begins to show signs of returning to his "former self".

Ash sets off to the tower bridge, which is built out of the human sacrifices and souls. To which Sebastian comments it cannot possibly be a holy bridge. With Ciel wounded, Sebastian scales up the bridge to meet the angel, who is relishing in the impurities and sins of the dead. Switching back and forth between Angela and Ash, the angel taunts the demon. He also claims how the impurities are more joyous than the finest of furs, and that it increases his power.

As they begin to engage battle, Ash tries to call upon the demon dog Pluto, but Pluto doesn't show up. Enraged by this, the hermaphrodite shoots feathers out in recoil.

After Sebastian enters his true demonic form, which he himself even refers to as "revolting", a countdown from ten begins as the angel is torn into pieces. Ash, shouting out in agony, repeats the word "filthy" over and over again, before the hermaphrodite is eventually killed.

While hiding in a box, Ciel starts having flashbacks of Ash and Angela.

Ash makes a return in the season 2 OVA dubbed "Ciel In Wonderland". He is seen in a nest with Angela making a strange noise similar to the screams he made when dying, but higher pitched. He is seen again as one of the many people that tries to get Ciel executed. Ash states that he wants Ciel executed because his "beautiful wings" were destroyed. After saying that, there is a flashback showing Ash dying. Once the flashback ends, Ash points his sword to Ciel and states that its his fault his wings were destroyed. When Ciel tries to prove himself innocent, Ash (along with an entire crowd), repeatedly tell Ciel to show proof of being innocent. Once Sebastion saves Ciel, Ash and everybody else is seen watching the two run away.

In this OVA, Ash and Angela play as the crew's stunt coordinators.

Ash appears as a tall, pale handsome man with white hair and amethyst eyes. He amplifies these colors in his clothing, wearing a white suit with a purple vest. He fights with a sword that resembles a fencing foil, which is strong enough to cut through steel and even cut off Sebastian's arm.

Ash initially appears calm, quiet, and loyal to the Queen Victoria. As an angel, he seems to think himself superior, and is annoyed by the Queen's human qualities. Even before his true self is revealed, Sebastian Michaelis is notably suspicious of him and views him as a vulgar man. He eventually falls into insanity, leading Sebastian to comment he might be a Fallen Angel.

When he reveals his true form, it is known that he is the male part of a hermaphrodite angel, although both he and Angela have distinct personalities. In particular, he finds fighting to be exciting, becoming almost maniacal about it, and easily becomes angry when any attention is diverted away from him during a fight, hinting a deeper madness that may differentiate him from other Angels. 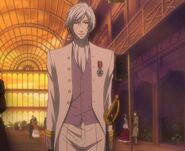