Avenge his brother's death and kill the Whitehills.

Asher Forrester is one of the five playable protagonists in the 2014 episodic Game of Thrones. Asher Forrester is described as a bogeyman within his own home, his family fears him do to his unpredictable personality and his past harm he has done on the reputation on house Forrester.

He was voiced by Alex Jordan.

The Codex is the description of the background of the Asher Forrester and the other characters within the game. The Codex gets updated as the player character story arc continues.

Asher had always been a rebellious youth – brawling in taverns, sleeping with whores, and finding ways to raise his father’s ire. But his life took a dark turn when, at age seventeen, he fell in love with Gwyn Whitehill, the eldest daughter of his father’s bitter rival. Bloodshed ensued and Lord Forrester faced a grim choice: go to war, or exile Asher across the Narrow Sea. He chose the latter. Asher remains in Essos to this day, living as a sellsword, trying not to think about the life he left.

Asher Forrester is many characters within the game describe mentally unstable man with a thirst for fighting and killing. Asher solves his problems with fighting over talking or trying to find an understanding he is also quick to react to violence when he notices someone he cares for he being abused as he beat a bully nearly to death that use to torment his Younger brother Ethan Forrester, under normal circumstances this would be considered a heroic act since he was defending his brother but the bully that Asher injured was merely a child who was about the age of eight to ten years old.

Even though Asher is a violent fighter, Asher has a scene of humour. Asher enjoys irritating his enemy's during battle by trash talking them or humiliating them during the fight, but this can be strategy during battle so the other warrior becomes frustrated losses the ability to think clearly.

Asher is a skilled fighter and arguably the post powerful swordsman in House Forrester, his most common used weapons are a hatchet that was forged by his family and a sword that he found in essos.

In in the city of Yunkai a former slave town, after the slave liberation, in the land of Essos. Asher works as a sellsword capturing anyone with a hight bounty on their head such as a former slave masters. Asher works alongside his friend Beskha a female mercenary that shares Asher's love for battle, killing, drinking, and whores. Asher is hated by the other sellswords in Yunkai for his unspecified actions in the past.

When Malcom arrived in Esssos to give Asher the news of his brother's death and the current state of House Forrester. Asher decided to return home to Ironrath and bring back an army of sellswords to slaughter House Whitehill for taking his family's land. 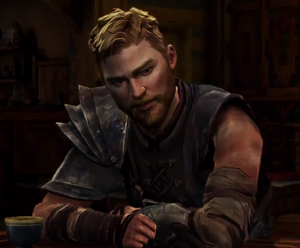 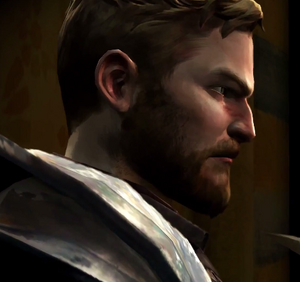 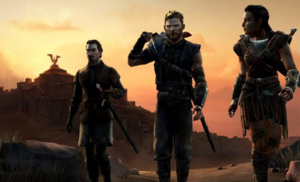