Ashiok is a humanoid Planeswalker and a villain from Magic: the Gathering.

Ashiok's design is not similar to any other being in the Magic: the Gathering multiverse. Its has pale skin, sharp claws, and black horns. Its head is only a mouth with two horns protruding from where his humanoid portion ends. Black smoke expels from its entire body and surrounds him wherever Ashiok goes. Ashiok wears a gown from a plane that has not been discovered yet. Ashiok's species and gender are unknown.

Most of Ashiok's past is a mystery. His home plane, family ties, and the event that ignited his spark are unknown. What is known is it has the power to pry into people's dreams and retrieve their deepest fears. Ashiok uses them to create nightmare creatures, ready and willing to serve it. Ashiok sends his minions to torment those who believe that they are superior or untouchable. Since every living thing experiences fear, Ashiok believes that fear is the great equalizer of the Multiverse. The use of this magic has caused a physical toll on Ashiok's body. Some of its body(including its head) have eroded away and have turned to nightmarish energy. Ashiok can use this energy to torture anyone it comes into contact with. After it's spark ignited, Ashiok traveled the Multiverse, encountering new beings and using their nightmares to one day create the perfect embodiment of fear. Its travels lead Ashiok to Theros due the role devotion plays on the plane.

With the unique power that dreams have on Theros, Ashiok sought to use them to its advantage. While most used devotion to help the gods of this plane, Ashiok did not want to aid the gods in any manor. Ashiok desired to syphon the nightmares from Theros' inhabitants. Due to the power that dreams of the gods have on this plane, the nightmares here are even more powerful than most other planes. It's plans have not yet been revealed, but Ashiok made a deal with Phenax, God of Deceit. The Nightmare Weaver went to the polis of Iretis to meet the humans and leonin of this area. These two groups were currently at war with each other, but they were supposed to meet to talk about peace. Ashiok disguised as an assistant to the King of the polis and when things were going well, sent nightmares to murder members of both factions. Believing the other side attacked first, the two clashed again with the leonin slaughtering all of the humans in the polis. With them gone, Phenax was able to commence his plan to store an army of Returned(a race of zombies on Theros) in the Polis. For Ashiok's success, Phenax granted the Nightmare Weaver with the ability to be invisible to the rest of the Pantheon(a wish that Phenax was pleased to grant). As a test, Ashiok tormented the dreams of some denizens of a nearby city. These corrupted dreams warped a new god, Cacophony, God of Cities. This new god was slayed by Ephara, God of the Polis, but Ashiok wasn't discovered. Pleased with the results, Ashiok set out to continue its mission.

Over time, Ashiok's influenced grew and many of the residents of Theros were left with terrifying nightmares. Because of the Nightmare Weaver, entire cities were on guard because of the nightmares it created. This affected magic users even more. People with magic abilities would end up in locations far from home with little memory of how they got there or what had happened. They only knew of the nightmare inflicted upon them by Ashiok. Throughout all of this, Ashiok's power grew. Ashiok planned to cast an endless sleep on the plane to harvest all of the nightmares created forever, but the Planeswalker Dack Fayden stands in its way. However, Dack was somehow able to stop Ashiok and escape from their curse.

While Ashiok's actions on Ravnica are unknown, their actions on Theros were recorded. The nightmare mage continued to spread fear across the plane. Their reach managed to seep into Theros's underworld. They eventually stumbled across the former champion of the sun god Elspeth Tirel. Inspecting her dreams gave Ashiok great pleasure and insight. What particularly got their attention was the existence of the phyrexians. Wanting to study the phyrexians for themeselves, Ashiok planeswalked away. 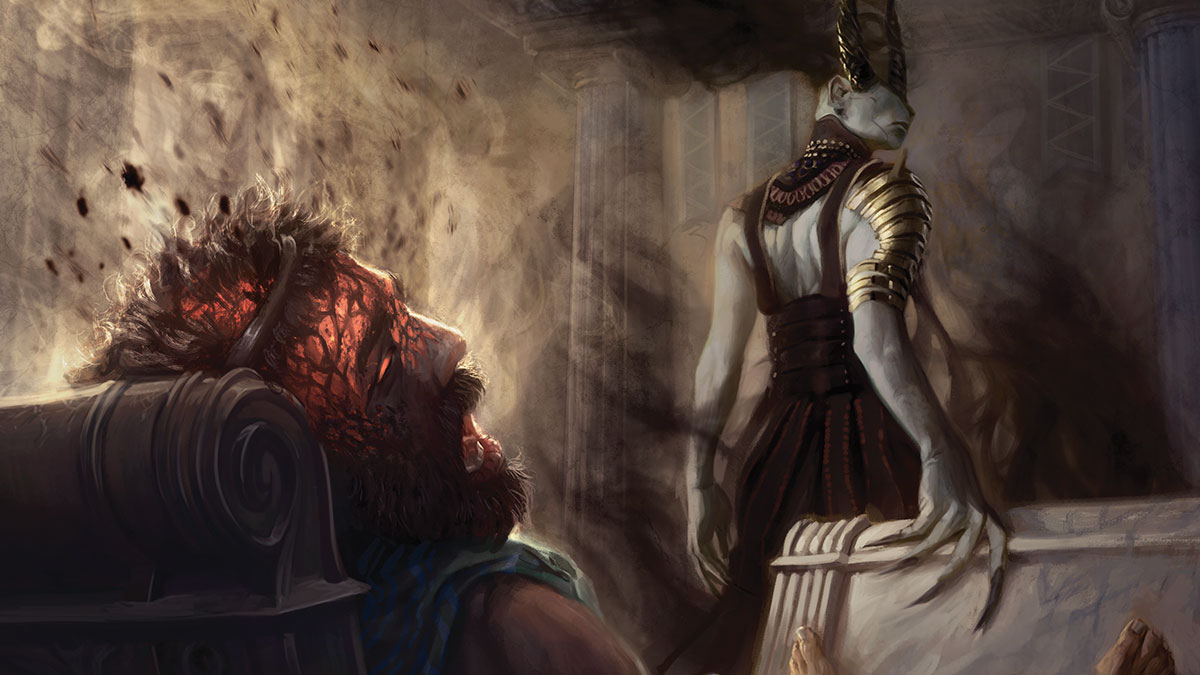 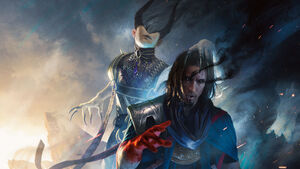 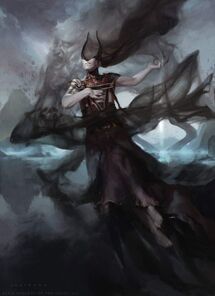 Ashiok from War of the Spark 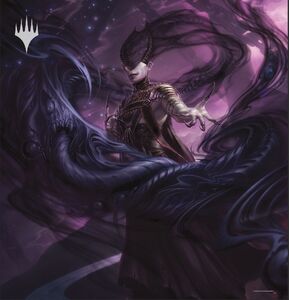 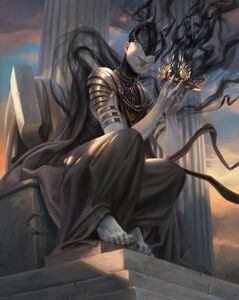 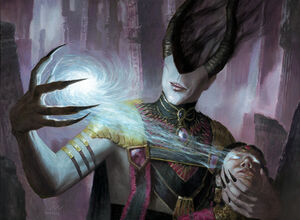 Ashiok erasing someone's memory
Add a photo to this gallery

Retrieved from "https://villains.fandom.com/wiki/Ashiok?oldid=3494989"
Community content is available under CC-BY-SA unless otherwise noted.