Villains Wiki
Register
Don't have an account?
Sign In
Advertisement
in: Cults, Mutants, Evil from the Past,
and 14 more

Many humans and mutants who followed the ways of Apocalypse

Obey the orders and will of Apocalypse, await his "second coming" (failed).

Give Apocalypse a new body to transfer into when needed and to aid their master in cleansing the Earth of the weak and the inferior (failed).

Ashir En Sabah Nur is an ancient and secretive cult of Apocalypse's faithful followers founded within Egypt in the 4th millennium B.C. and a group of minor villains in X-Men: Apocalypse.

The Ashir En Sabah Nur cult was founded sometime during the days of ancient Egypt where a young Apocalypse had descended upon the world and showed off his newfound abilities. Proving his worth, he soon used his powers to gather legions of followers and even an elite team of 4 disciples known as his Four Horsemen.

Years into his discovery, Apocalypse has now assembled countless followers to worship him and build a monument in tribute of him. One day, Apocalypse is brought to a pyramid where he was been given a brand new, fresh and young body as he needs one to transfer his consciousness into in order to survive.

The transfer is instigated and goes well however, a group of conspirators betray him and bury Apocalypse underneath the pyramid by knocking down its pillars, bringing down the building, killing his horsemen and followers inside, and burying him alive for thousands of years as he lied in dormancy.

Despite Apocalypse being lost and buried in a state of dormancy for centuries, his legacy had lived on as generations of people continued to worship him in private, both humans and mutants alike.

Since with the mutant race being revealed to the public in 1973, various cults were formed and worshipped mutants as they were seen as a sign from God or an omen of the end of days, with Ashir En Sabah Nur being one of them.

In 1983., Moira MacTaggart, a CIA agent had been researching them and went on an undercover mission to Cairo where she stumbled across a gathering of cult members worshipping Apocalypse in an underground cave where the pyramid top keeping Apocalypse alive underneath is seen. Sunlight is let through however and this causes Apocalypse to re-awaken and MacTaggart to run out and escape but only her and Apocalypse survive the cave-in as the other cult members are crushed and killed by accident. 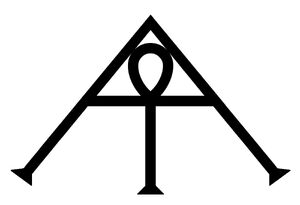 The iconic symbol of the Egyptian cult known as Ashir En Sabah Nur.