Manipulating others to his control.

Kill the man who murdered his parents (succeeded).

Ashleigh Crichton is the older brother of protagonist Julia Crichton and an antagonist towards the latter half of the film Fullmetal Alchemist: The Sacred Star of Milos. He seeks revenge, once against his attacker Atlas, and against Milos itself.

Like the rest of the Crichton family, Ashleigh was forced out of their Milosian home as the citizens threatened the alchemist family. Seeking security, he and his family were put under the care of Security Chief Atlas. Ashleigh was intrigued by his parents' research in discovering the creation methods of the Sanguine Star (Philosopher's Stone) when their parents were attacked and murdered by a traitorous Atlas. Ashleigh told his sister Julia to stay safely away in another room while he went to investigate. Atlas attacked the boy and stripped the skin of his face and a tattoo on his side of the Milosian ruins. Ashleigh survived by swallowing a stashed Sanguine Star but could not heal his face even with its power.

Following this, Ashleigh retreated into Creta and joined the military service. He donned a white mask and became known as Herschel, eventually making it to the rank of Colonel.

As Herschel, Crichton leads a Cretan military force to Table City where he follows the path of Melvin Voyager/Atlas and Julia. He sends his werewolf chimeras to ensure Atlas' death and to secure Julia but fails at both partly thanks to the intervention of the Elric Brothers. Undeterred, Crichton follows Atlas and eventually catches up to the villain. At this point, it is revealed that Atlas had grafted Ashleigh's face onto his own in order to deceive Julia and trick her into creating the Sanguine Star. Atlas' plot is foiled when Julia swallows the Star and Crichton steps in to kill Atlas by destroying his body.

Nevertheless, Crichton wishes to continue Atlas' rampage as a way to seek revenge against the Milosians for their mistreatment of their family from years before. He also reveals his intentions to use the power of the Star in order to create a new world where order, as he sees it, will be restored. Immediately, he is countered by Edward Elric who duels with him while trying to make Crichton see the flaws of his plot, telling him that he is only "unwilling to accept reality". Crichton, however, is caught off-guard by a Star-empowered Julia who fatally wounds him. Desperate to save her brother's life, Julia uses the power of the Star to heal him.

In his final scenes, Ashleigh awakens in a hospital along with Julia and notices that the power of the Star has restored his face. He takes his leave, donning his mask and leaving to the Cretan military once more as Herschel. But, before doing so, he leaves a sign of his survival by taking one of the earrings shared with Julia, a sentimental gift Julia had attempted to share with the fake Ashleigh, to show his sister that he still cares. 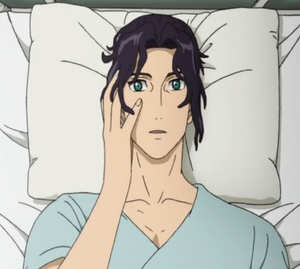 Ashleigh back to normal 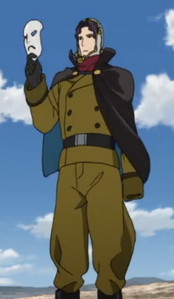 Ashleigh going back to Cretan