To get rich by any means necessary.

Ashley Sanderson is one of the three main villains of the 2003 comedy film Bringing Down the House. She is the nasty, promiscuous and alcoholic former sister-in-law of Peter Sanderson who hated her for treating him like dirt as she disliked him for marrying her sister Kate, and she seduces and sleeps with wealthy old men for money.

She was portrayed by Missi Pyle, who played Gail Van Ravensway in A Cinderella Story: Once Upon A Song, Vera Murchins in Home Alone 4, Nadia Vole in Alex Rider: Operation Stormbreaker, and Shelly Stoker in My Name is Earl.

In the beginning, Ashley is first seen talking with her sister Kate about how the older man she was dating complimented her on her outfit and makeup, causing her to ask him "what does he think I am, a hooker?". She is often reminded by Kate to censor her language around the children and hearing that her nephew Georgie can't read, she mocks him, telling him how his daddy can't read either and he's just stupid. This angers Kate and Georgie tells her that he's not stupid, which she doesn't believe. When she leaves for her date, her ex brother-in-law asks her what morgue did she find her next date from. When Charlene takes the kids to the pool to go swimming, Ashley orders for a refreshment, assuming that Charlene is a waiter serving food and drinks. Ashley continues to talk trash about Charlene, enough for Charlene to want to fight her.

She soon fights with Charlene whom she disrespects and gives racist comments to because Charlene is black. However, she ultimately defeated by Charlene when she is picked up and hung on the coat hanger from her undies up.

After the encounter, she and Kate have a dinner reservation at the same restaurant Peter and Charlene are attending. To protect her reputation, Ashley lies about her black eye and bruises, saying that she was hit by a car Jay-walking on purpose. She is horrified when she sees Peter and Charlene dancing together and when Kate wants to go talk to him, Ashley begs her not to, for she fears colored people will break into her house in the middle of the night and cut her if she says anything.

She is last seen in the end of the film coming out of an empty room with another elderly man after a torrid session with him and walks away while tucking in her undies in front of him. 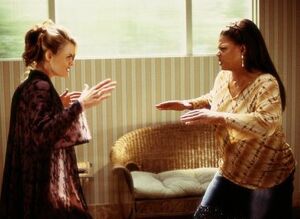