Sow the seeds of war across Tellius.

Ashnard (in Japanese: アシュナード), also known as the Mad King, is the 13th King of Daein and the main antagonist of the 2005 videogame Fire Emblem: Path of Radiance, He wields the wicked sword Gurgurant, and his mount is the twisted body of Rajaion, the Black Dragon prince of Goldoa. He is unlockable by completing 15 playthroughs of the game.

The 13th King of the nation of Daein, Ashnard wages war on Crimea in an effort to ignite a continent-wide conflict. His goal is to obtain Lehran's Medallion, the Fire Emblem, which holds the spirit of a dark god that thrives on chaotic energies. Although he obtains the medallion and makes numerous efforts to sow the seeds of war across [ellius, he is ultimately defeated at the end of the game despite being able to use the medallion to gain god-like power. Ashnard's wyvern mount is in fact not a wyvern at all, but the warped form of Rajaion, the prince of Goldoa, a black dragon laguz, and Ena's fiance as well as the brother of Ashnard's wife, Almedha. Before becoming king, he was a great warrior who was able to almost single-handedly grant victory to Daein in a minor conflict between Daein and Begnion. His rise to power was considered highly unlikely, because a long list of other relatives stood ahead of him in line for the throne.

Although it is publicly believed that a major illness led to the deaths of the other potential rulers, in reality, Ashnard killed them all. In the game's sequel, it is revealed through Ashnard's wife, Almedha, that Ashnard had tricked his father the king into signing a blood pact. When the king unknowingly broke it, many citizens of Daein perished under the blood pact's plague. Ashnard ended the blood pact by killing his father and destroying the document. One year after the plague subsided and all of the Daein royal family in succession for the throne were dead, Ashnard was crowned King of Daein. His coronation occurred 18 years before Fire Emblem: Path of Radiance.

It is revealed that Ashnard believes that the current society, based on Begnion's hierarchy, is wrong. Ashnard believes that one's lot in life should be solely based on their power; he tells Reyson that class and species will not matter in his world, that the strong will ultimately rule the weak. This likely explains Daein's system, where those who display great levels of might, particularly in combat, have the ability to gain much power within Daein society, regardless of class or social standing. It is also revealed in Radiant Dawn that Ashnard is the father of Soren. 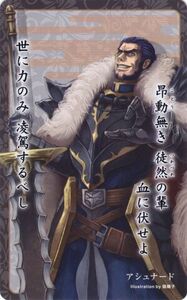 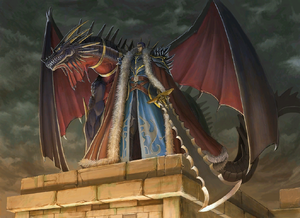