Asimov is one of the main antagonists of Inti Creates' 2D action-platformer game Azure Striker Gunvolt, and the main antagonist of its alternate-timeline sequel Gunvolt Chronicles: Luminous Avenger iX under the alias of Demerzel, which takes place after the bad ending of the first game.

Founder of a guerrilla group, Asimov fights for the equal rights of Adepts, humans born with different kind of superpowers known as Septimas, against the Sumeragi Group, guilty of unethical experimentation and almost slavery against them. However, in reality, Asimov is an extremely xenophobic individual whose wish is the complete eradication of all non-Adepts by taking control of the Sumeragi foundation, a goal that was achieved on the bad ending on the game. He is voiced by Masashi Yukita in his game appearances, and dubbed by Maxwell Powers on the OVA Azure Striker Gunvolt: The Anime.

Before turning into the founder of QUILL, Asimov was the son of two unnamed illegal immigrants. Originally, Asimov wasn't born as an Adept, but his genes were compatible with a specific and very rare special Septima, the Azure Thunderclap or Azure Striker, a Septima that allows the user to freely control the electrons and lightning in many forms. The first Adept to be ever discovered in the world in South America hold this Septima, and since then, the Sumeragi Group looked for many ways to clone it and artificially create this Septima by implanting it into compatible individuals, with the intentions to mass-produce it for energy research. This project was known as Project Gunvolt, and thanks to his compatible genes, Asimov was taken from his parents in order to be implanted with the Azure Thunderclap, renamed with the codename Takefutsu. After many experiments, Asimov was successfully deemed a match with the Thunderclap Septima as expected. However, and unfortunately for him, he was too powerful, and was unable to fully control his Septima, and thanks to that, he was treated as a defective, being a subject of different kinds of horrid experiments as a lab rat. This is where Asimov grew a deep-hatred against non-Adept people, blaming them for all the suffering he is subjugated too. Escaping after generating a blast of electricity, he went overseas and eventually founded QUILL, and helped another survivor of his experiments escape, a nameless child who became known as Gunvolt.

Asimov is first seen guiding Gunvolt through a Sumeragi facility to track down The Muse. Although Gunvolt was dismissed from the group due to him saving The Muse/Joule, he and Asimov continued to work together to defeat the Sumeragi Seven. Once Joule is captured by Merak to deliver to Nova, Asimov launches an attack on Babel, the elevator to Nova's spaceship. After Gunvolt sneaks inside and defeats the leader of Sumeragi however, Asimov reveals his true desire: to destroy every non-Adept. After failing to convince the fellow Azure Striker and his friend to rule with him, using Copen's gun (whom he encountered, fought, and defeated on the way there), he shoots both of them dead, with him only killing Joule in the original timeline. Although he tried to sneak back to Earth via Babel, Gunvolt manages to catch up to him and have a climactic showdown with Asimov, with Gunvolt being the victor. Asimov asks his foster son to guide humanity to a better future, and perishes.

While Asimov himself does not appear in the game, he was given a few mentions. In Gunvolt's story, Teseo, in one of his many attempts at trolling Gunvolt and Joule, specifically brings up Asimov and the events of the first game as a means of taunting the two of them and getting under their skin. Asimov was also alluded to later on in the story, with Gunvolt expressing regret over "failing Joule again". When Copen mentions having been to Firmament once before, Lola asks him for more details on the matter, and when he stays silent about it, Nori chimes in and says that former doesn't have many good memories of the event in question, because of an "Adept that beat him up and stole his equipment", referencing Copen's offscreen battle against Asimov in the first game.

Set in the bad ending of the first game, where both Gunvolt and Joule die, Asimov takes the reins of Sumeragi under the alias of Demerzel. Over time, Sumeragi's goals were completely changed, as they began to hunt down and slay non-adepts/Minos as the Sumeragi Institute of Human Evolution. Still latching on to the idea of a king and queen, he managed to find his quarry, the king as his loyal warrior Blade, and his queen as the Butterfly Effect, the alternate timeline's Mytyl, tortured for decades to help Asimov's schemes. At some point, he also ascended to become an AI.

After Copen defeated all six of his falcons, Asimov sends a myriad of Giga Lolas to speed up the process of humanity's extinction. Defeating one of them nearby, he goes into Sumeragi Building 13, Asimov's lair, to bring down the tyrant once and for all. Although managing to both beat him and his true form, Asimov strikes back with one final attack, seemingly leaving Copen for dead. Having used up a majority of his energy during battle, Asimov decided to go to sleep to recharge his energy. From there, Kohaku arrived on the scene after hearing Lola's song, borrowed Copen's gun, and delivered the final blow to Asimov while asleep. With his defeat, Asimov's century-long rein of terror comes to an end at last.

Although Asimov himself is absent in the game, he appears as a collectible pixel sticker, being available to anyone who can beat the game in less than a hour.

As Asimov, he appears as a young man with white hair and purple eyes. He wears shades to limit his power, as well as a long gray coat, white pants, and black boots. When unleashing his power, his hair stands on end and his eyes turn a solid white.

As Demerzel, he appears as purely made of out of electricity. White and blue in color, Demerzel's eyes and hair resemble lightning bolts, his mouth a permanent smile, and various dark lines running throughout his body.

As Asimov, he originally keeps a professional aura during missions and takes his work seriously, with having little patience with those who disobey him. However, he has a misanthropic, fiery zeal to him, desiring to destroy everyone who isn't an adept. Despite this, Asimov does has some lighter sides to him, such as a interest in Japanese culture and his closeness to his team-mates, including being especially close to Moniqa, a non-Adept. It is unknown if said closeness was merely a ploy or not, however.

As Demerzel, however, his more positive traits are not visible, and he still desires the extinction of humanity. Over time, his psyche has weakened, becoming more insane as the time went on. He serves as a mirror to Copen in this state, as where he sacrificed his mind for power, Copen just made himself a cyborg, with his mental state intact.

Being an Adept with the Azure Striker ability, Asimov naturally has the ability of electrokinesis. Being the one who taught Gunvolt the ropes, he also has many of his attacks, such as Voltaic Chains and the Flashfield. He can also generate shockwaves along the ground. He also is a expert marksman.

As Demerzel, Asimov has lived for decades, and has access to more powerful electrical abilities (such as Crashbolt, Astrasphere, Luxcalibur, Grand Strizer, and Voltaic Chain Meteor.) and control over Sumeragi's technology. However, he isn't immortal, as if the three containers that can maintain his form are destroyed, he will die. In his first stage, Asimov can also throw knives and summon drones. 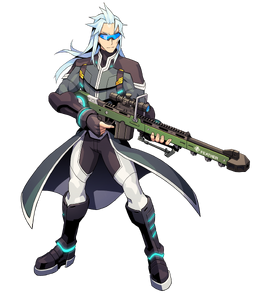 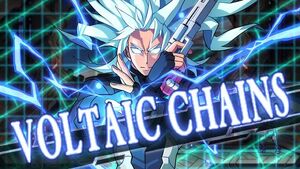 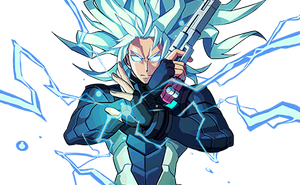 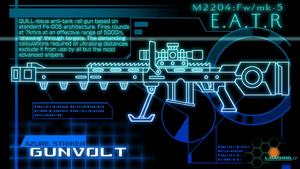 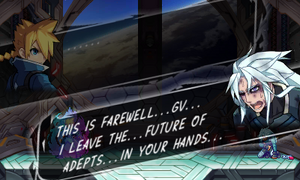 Asimov right before before his canonical death. 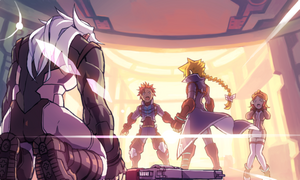 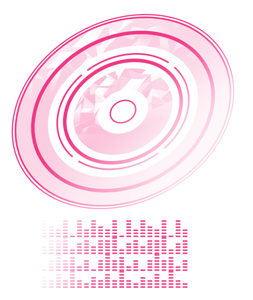 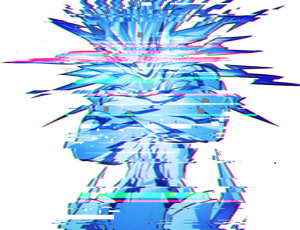 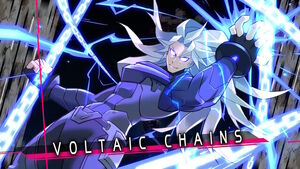 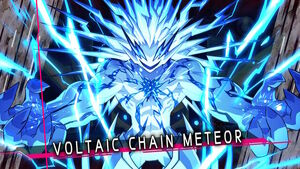 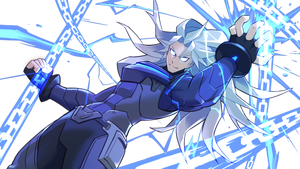 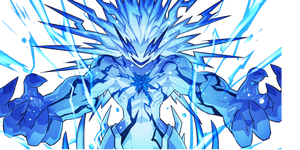 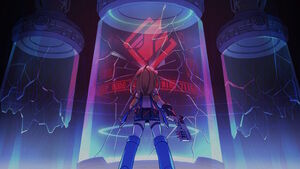 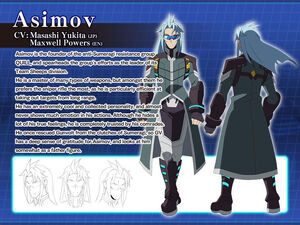 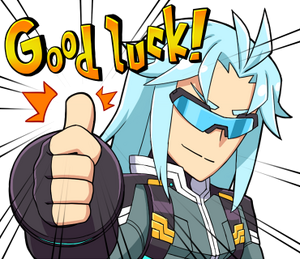 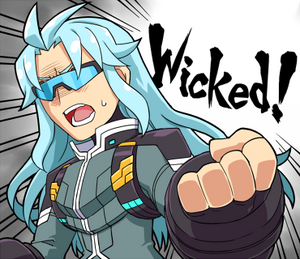