Villains Wiki
Register
Don't have an account?
Sign In
Advertisement
in: Male, Doctor Who Villains, Aliens,
and 6 more

To turn Earth into a radioactive wasteland to sell as fuel

This Unnamed male member of the Passameer-Day branch of the Slitheen Family served as a supporting antagonist in the Doctor Who episodes Aliens of London and World War Three.

As Oliver Charles, he is played by Eric Potts whilst Rupert Vansittary portrays him as General Asquith and also voices his true form that is played by Paul Kasey.

He along with his brother Jocrassa, his sister Blon and several other members of the Passameer-Day Slitheen arrived on Earth in 2006 and infiltrated government with this male disguised himself as Oliver Charles, Jocrassa as Acting Prime Minister Joseph Green and Blon as Margaret Blain. He along with his family planned to start a nuclear war on Earth and turn it into a radioactive wasteland and sell it as cheap starship fuel. Later, General Asquith tried to remove Jocrassa from power only to be killed by "Oliver", Jocrassa and Blon before his skin was used as a disguise by "Oliver" to have control of the British military.

After The Ninth Doctor and several alien experts were summoned to 10 Downing Street, "Asquith" revealed his true form to them before Jocrassa electrocuted them, with only the Doctor surviving. The Doctor left to find soldiers to deal with them, but by the time they got there, Asquith was back in his disguise and Jocrassa tricking the soldiers into thinking the Doctor is a threat. Asquith later informed Jocrassa about the death of one of their members Sip Fel-Fotch Passameer-Day Slitheen.

He along with the rest of the Slitheen (except Blon, who was able to teleport away) were killed when Mickey Smith, the boyfriend of the Doctor's companion Rose Tyler, shot a missile into Downing Street. 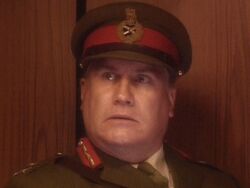