Assassin is a villain from Fate/Zero who is the Servant of Kirei Kotomine during the fourth Holy Grail War. His unique trait is his capability of manifesting as multiple entities at once. They all act as reconnaissance agents for both Kirei and Tokiomi Tohsaka. They are killed by Gilgamesh durng their first task to assassinate the Tohsaka and the first also the last battle against Gilgamesh.

The multiple personalities of Assassin are able to vary widely in age, gender, build, and dress style, but in general, their hair appears purple, and their skin and clothing are nearly black. They all wear the standard skull mask associated with the known Hassan of other Grail Wars. Much like True Assassin, the female Assassin doesn't actually have a face underneath her mask even though she was given a design in Fate/Zero material.

Each of the Assassins has their own personality, and their experiences are not shared between them. The female Assassin is shown to be the main one to interact with Kirei. The Einzbern Consolation Room introduces the first Assassin to be killed by Gilgamesh as Zayd. Zayd has a polite tone of speech and a habit of pushing his mask up repeatedly when he speaks. He is very passionate and emotional, and gets upset that his only role was simply to die. He is eventually convinced to have more pride in his role, and vows to become Zayd, the King of Assassins, before dying in despair and seeing the others being slaughtered by Rider.

As with every legally summoned Assassin per the original, uncorrupted rules of Fuyuki's Grail War, his identity is that of the legendary Persian "Old Man of the Mountain," Hassan-i-Sabah, the leader of al-Assasīn. Despite his possession of female personalities, Hassan's original existence is actually referred to with a masculine pronoun in quotation marks, which has been interpreted to suggest that he may have been physically male, at one point. His wish to the Holy Grail was, in fact, to ultimately "be reconstituted as a complete personality."

The Assassins initially act as reconnaissance agents for Tokiomi and Kirei, after Gilgamesh kills one of them in full view of the other Masters who possessed no specialization in any particular skill. This tactic successfully lead most of the Masters to believe that Kirei and Assassin had been defeated, and allowed the dozens of remaining Assassins to move freely without suspicion. Their continued existence, however, is discovered when Rider and Waver Velvet accidentally encounter three Assassins in Caster's lair.

The Assassins meet their end when they are sent to gauge Iskander's power levels. He complies by using his most powerful Noble Phantasm, "Ionioi Hetairoi: Army of the King", to massacre each and every one of the Assassins.

Urobuchi originally designed a plot line involving one of Assassin's personalities, a small girl called Child Assassin, joining with Waver and Rider in the second or third volume to lighten up the story, but it remained unused because giving Waver too much focus would have made the identity of the main character too confusing. She was conceived as a unfortunate young girl lacking in conversational skills, memories, and the awareness that she was a part of Hassan Sabbah. Her clueless personality surfaces when she is captured by the enemy in order to protect her secret, so when she, along with the other Assassins, attack Waver and Rider in Caster's workshop, she separates herself from those who are beheaded by Rider.

Waver mistakes her presence there, believing her to be one of Ryuunosuke's victims suffering from memory loss, and while Rider knows of her identity, he honors Waver's chivalry to allow the Mackenzies to take in yet another false household member. After Kotomine, who knows of her existence, utilizes the Command Spell to attack those at the Einzbern Castle, she regains her memories as Hassan. Through a dramatic farewell tragedy, Waver would climb another step on the path to becoming an adult.

Unlike True Assassin, who was one entity, the Zabaniya of the Assassin of the 4th War permitted him to divide into up to 80 separate existences. This was not a result of modifying his flesh in the manner of the 18 Hassans that predated him. Rather, the multiple bodies he possessed as a servant came of intentionally fragmenting his psyche in life—a sort of self-inflicted dissociative identity disorder intended to compartmentalize the various skill sets and knowledge he had accumulated during his lifetime; a total of 32 distinct specializations. Summoned by the Grail, he obtained the capacity to express each personality as a independent body, and to relegate individual tasks to the personalities best suited to them.

As the nature of the Assassin's Noble Phantasm is "division," the sum of his iterations did not exceed his original existence in strength or capacity; that is to say, each independent fragment was far weaker than his original whole—and owing to the generally weak starting attributes of his class, he definitively became the weakest Servant of the 4th War. However, the class ability of Presence Concealment was shared across all bodies without degradation, effectively permitting him to serve as an "intelligence network" in his multiplicity. 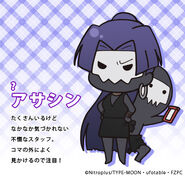 Hundred-Faced Hassan
Add a photo to this gallery
Retrieved from "https://villains.fandom.com/wiki/Assassin_(Fate/Zero)?oldid=3526058"
Community content is available under CC-BY-SA unless otherwise noted.