Assassin is an antagonist in the Fate series. He is the solitary servant of Caster during the fifth Holy Grail War.

Clothed in a traditional Japanese umanori hakama and kimono with an indigo haori, he bars entry beyond the main gate of the Ryuudouji Temple. Quiet and composed, he maintains a degree of bushido and is eager to spar with other Servants. While he is of the same class, he is not to be confused with Zouken Matou's servant, True Assassin.

Unlike other Servants, Assassin actually has no true identity, even though he masquerades as the mythical Japanese swordsman known as Sasaki Kojirou. Although his name remains, he is a skilled swordsman whose actual existence is doubtful. He is a handsome swordsman who carried a ninety centimeter (one-hndred and fifty centimeter in Fate/stay night) long blade, Mono-hoshi-zao. He was born sometime during the Eiroku era, and he is said to have become famous around the tenth-seventeenth year of the Keichou era, but the truth is in fact unknown. Books that included Sasaki Kojirou's name all contradicted each other in terms of years, and he hasn't even mentioned his biggest rival, Miyamoto Musashi's book Gorinn no sho. It is according to records that Kojirou was born in Echizen, he studied the Tomido style, a favored long blade, and, after defeating his master's younger brother, he named his style the Ganryu. Afterwards, he traveled around the country and developed Swallow Reversal as his secret sword technique, which could even kill a flying swallow. He later frightened the warriors all around the country, fought Miyamoto Musashi on Funajima in order to maintain the pride of his lord that he fought for, and died. He was unable to fight holding his sheath due to the length of his long blade, so he threw his sheath aside during his battle with Musashi, but Musashi saw that and said, "Kojirou, you lose. If you're were planning to win, why did you throw away your sheath?" Though Kojirou was Musashi's rival, his figure in Fate/stay night is as illusionary as the moon appearing on the water's surface. There was supposedly a person like him but we have to say the story of Sasaki Kojirou today was made up by people.

In Fate/stay night, Kojirou's profile in the modern era is an invention, a blend of details from the lives of many nameless and forgotten historical swordsmen. Acting as a nameless wraith who shared similarities with the legend, Assassin assumed the appearance and skills of Kojirou upon his summoning.

Assassin's appearance is that of a samurai swordsman with long indigo hair tied into a ponytail and indigo eyes. He wears a traditional light purple umanori hakama and kimono, light purple tabi and black geta with purple haori and tekkou. He carries his sword, Monohoshi Zao, on his back.

Assassin is a quiet and composed man who always maintains a degree of bushido and is eager to spar with other Servants. He cares little for the Holy Grail, and outside of his duties to Caster, he only seeks to enjoy a decent sword fight. He truly dislikes his Master, and won't hesitate to kill her. It is revealed in Fate/Unlimited Codes that he refused to be ordered around by a woman upon his summoning by Caster, and as a result, Caster used a Command Spell to force him into obedience. Although the Servants are supposed to hide their true names and powers, he told Saber who he was when they first met. He always admired the beauty and nature and also the moon.

Assassin was summoned by Caster as a guardian and watchman for the Ryuudouji Temple's front gate. As an improper servant, Assassin is entirely dependent on Caster for mana and cannot move freely beyond the grounds of Ryuudou Temple. Furthermore, he lacks most of the visual parameters and abilities granted to his class. Assassin cares little for the Holy Grail due to his limited status, and outside of his duties to Caster, he only seeks to enjoy a decent sword duel.

In the Fate scenario, Assassin drives back Saber during her first assault on the Ryuudou Temple. During their second meeting (anime only), he allows Emiya Shirou and Tohsaka Rin to pass in order to engage Saber in a duel in which he is defeated. In the Visual Novel he is never seen after his initial confrontation with Saber and it is assumed that he fades away after Caster is killed.

In Unlimited Blade works on the last night of the Holy Grail War , Saber went to the front gate of the Ryuudouji Temple to fight against Gilgamesh however Assassin still exists and wants to duel against Saber. He is defeated by Saber due to his blade being bent from their previous encounter, which leaves an opening in his Tsubame Gaeshi.

In the Heaven's Feel route, Assassin's corpse serves as Zouken Matou's catalyst for the summoning of True Assassin after he is killed by the entity known as the shadow.

In Fate/hollow ataraxia, Assassin remains bound to the Ryuudou Temple, and continues to watch over its front portal even though peace has settled over Fuyuki City. He converses with whoever is kind enough to climb up the steps to see him. When Avenger makes his move, Assassin fights the dog-shadows right beside his Master, Caster. Incidentally, he takes upon the pseudonym Tsuda Kojirou.

Assassin retains his identity from the original novel version of Fate/stay night, but he doesn't appear within the Fate/Prototype animated special.

Saber's first impression of Assassin was that he appears to have no extraordinary ability whatsoever despite wielding a long Japanese sword with a perfect form. She quickly judged the man to have the trait to hide his abilities, something only Servants of Assassin class possess. He is noted as the greatest in terms of pure swordsmanship among the Servants of the fifth Holy Grail War.

Because of that, this Assassin is very untypical. Normally, Servants in Assassin class are the weakest ones in direct confrontation and they defeat enemy Servants through covert actions or by killing their Masters to cut off their prana supply. Kojirou, however, excels in swordsmanship and was able to fight on equal ground with Saber. Though of the Assassin class his swordmanship is on a level beyond even Saber's. Saber also commented that normal attacks won't work against Assassin. In Unlimited Blade Works, he was able to singlehandedly repel several Servants from passing the Ryuudouji temple gates, and even Lancer commented that he wouldn't like fighting him one on one and would prefer to kill him off from distance.

Assassin possessed a sword technique called Tsubame Gaeshi. A Technique that defies the laws of physics, Assassin can simultaneously perform three sword slashes in mutually exclusive directions that cause the effect called Multi-Dimensional Refraction Phenomenon, it reaches the same level of a Noble Phantasm out of pure Godlike Skill instead of Magic. This Technique is design for close range one on one combat and it's said to be unavoidable if there are no errors in its execution. This technique synchs well with his class of Assassin. 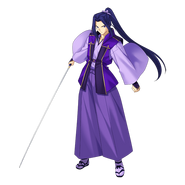 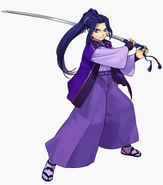 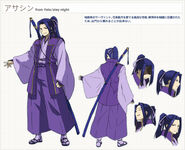 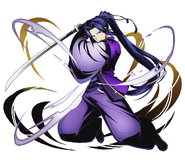 Assassin in Divine Gate.
Add a photo to this gallery
Retrieved from "https://villains.fandom.com/wiki/Assassin_(Fate/stay_night)?oldid=4300685"
Community content is available under CC-BY-SA unless otherwise noted.