Assef is the main antagonist of Khaled Hosseini's 2003 novel The Kite Runner and its 2007 live action film adaptation of the same name. He is a sadistic and racist psychopath who is driven to assert dominance over others in ways that include violating, harming and killing other people.

As a child, he rapes Hassan, a member of the Hazara minority whom he looks down on. As an adult, he becomes a high-ranking member of the Taliban, and takes small children from orphanages and sexually abuses them.

In the 2007 film adaptation, he was portrayed by Abdul Salam Yusoufzai as an adult and Elham Ehsas as a teenager.

As a teenager, Assef is a bully who terrorizes other children, especially those of the Hazara minority. He comes from a wealthy family, with a politically connected father who gets him out of trouble. As an adult, he uses those connections to become a high-ranking member of the Taliban - not out of any particular religious devotion, but simply as a way to have power over other people and commit acts of cruelty and violence.

He also takes sadistic pleasure in hurting people, and is especially keen on sexual violence, raping those weaker than him to keep them under his control. He is also a bigot who admires Adolf Hitler and sees the Hazara minority as inferior, and wants to exterminate them, much as his hero Hitler had tried to exterminate all of the Jews in Germany.

Assef first appears with his companions to taunt and bully Amir and Hassan, who are walking down the street. He often questions their friendship, and mocks Hassan with the idea that "he is really just a servant to Amir".

After Amir and Hassan win a kite-fighting competition, Hassan gets lost and ends up in an alley, where Assef and his friends corner him and demand he gives them the kite. When Hassan refuses, Assef decides to "teach him a lesson" by beating up and raping Hassan while his cronies hold him down. Amir witnesses the whole thing, but instead of helping, he runs away and avoids the guilt by forsaking Hassan's friendship.

One night at a party, Hassan attended the party where he socialized with the adults and had a fun time at the expense of Amir's misery. Assef comes over and shows Amir a picture of Adolf Hitler as a present.

Decades later, Assef joins the Taliban and is responsible for numerous deaths that had happened in the region as a result of the Taliban's conquest. After Hassan is killed by the Taliban, Assef kidnaps his son, Sohrab, and keeps him as a sex slave.

When Assef first appears, he stones a man to death for no reason. When Amir confronts Assef and demands he release Sohrab, to which Assef refuses, which results in a physical altercation. Ultimately, Assef loses the fight, and Sohrab fires a marble with the slingshot into his eye, blinding him and giving Sohrab and Amir a chance to escape.

It is unknown what happened to Assef afterwards, though it's possible that he could have died from the infection by the shot in his eye or was assassinated by the U.S. Army later on in the war. 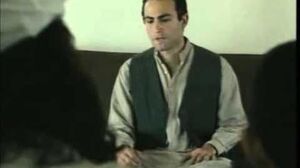