Argon, the Lord of Goblins

Astaroth (later known as Dark Astaroth) is one of the main antagonists of the Ghosts 'n Goblins series as well as the most recurring antagonist. Astaroth is one of the Emperors of Makai and is the lowest ranking.

Astaroth is the evil and merciless ruler of Makai in his master Lucifer's stead. Extremely resistant to pain, he can shoot fireballs from both of his mouths. In this game he can only be vanquished by either holy cross or holy shields.

Having lost the throne of the Makai after his first defeat, he now watches and protects Lucifer's keep. Instead of fireballs, this time he will attack the player with his long-ranged fiery breath from both of his mouths. The player must face him two times in a row, and the second time he divides himself and corners Arthur if one of his forms is not defeated quickly enough.

In this game, he protects Sardius and shoots laser beams and a trail of fireballs from his two mouths. He also likes to stomp on Arthur if given the chance. He will battle Arthur two times. When he is finally slain the first time, his body is possessed by an entity known as Nebiroth, the undead devil king, and he is resurrected.

He returns as the main antagonist and final boss of this game were he once again kidnaps the princess making Author fight him once again. In his first form he does his usual until his second form stars were he turns into Dark Astaroth who has more powers than before including the power to fly however Arthur defeats him once again and he ends up getting sucked in a portal possibly destroying him once and for all.

Astaroth appears as a cameo in Demitri Maximoff's and Akuma's ending after their battle against Red Arremer to challenge Astaroth.

Astaroth makes an appearance as a boss in Namco X Capcom. Astaroth was defeated by Arthur several years before the events of the game, but he revived and makes an alliance with the demon Druaga (although they were actually using each other) to take over the Demon World. At first, Astaroth seems a bit off from his former self, but when defeated by Arthur and his allies in the Demon Realm Village, Nebiroth appears and reveals that Astaroth is simply a marionette under his control, as Astaroth's soul was chopped in half when he was first defeated by Arthur, allowing Nebiroth to have two Astaroths (each with half of the soul) appear to work for him. The two and Nebiroth are defeated, and without them the Demon Village collapses. Astaroth and Nebiroth are revived near the end of the game, and are killed again.

Astaroth also makes an appearance as a non-playable boss character in the crossover video game; Project X Zone. His attack is Devil Rage, where he punches the target upwards, releases a beam from his upper mouth, and unleashes flames from the lower mouth.

Astaroth has a cameo appearance in Sōki's ending

Astaroth appears in the background of the Demon Village stage. He also appears as a card in the Heroes and Heralds mode from Ultimate Marvel vs. Capcom 3. 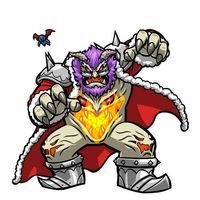 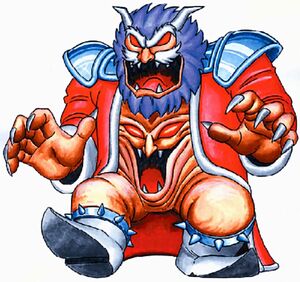 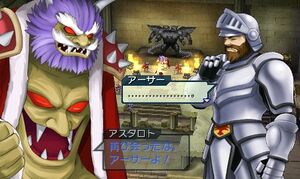 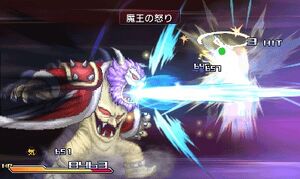 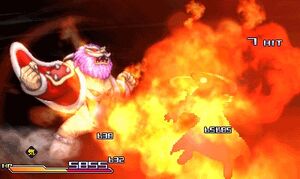 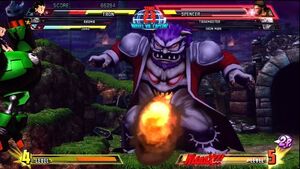