Studying Chiropterans for his own gain

Have his Chiropteran research win the Nobel Prize

He has been in the hierarchy of Red Shield directly behind Joel Goldschmidt. However, he betrays the Red Shield for his career and joins Cinq Fleches to pursue his ambition of bringing his works in the limelight.

Dr. Aston Collins was once the second-in-command of the Red Shield, primarily in charge of researching the chiropterans with Julia as his assistant. He grew increasingly frustrated at being unable to ever publish his research. Van Argiano approaches him about joining Cinq Flèches and Collins agrees and betrays the Red Shield by revealing the location of the organization's headquarters. He convinces Julia to join him, but turns against her after Amshel makes her Diva's personal physician. Sent into a jealous rage, he confronts Julia and attempts to murder her so he can regain his position. Right as he is about to shoot her, David runs in and acts as a human shield to protect Julia. Although he was shot, David is able to throw a scalpel into Collins's arm which causes him to run away screaming. Collins is never seen again in the series.

Collins sees Julia as a brilliant mind and diligent assistant that he would like to work with. Because of his desire for attention, recognition and knowledge he displays a certain animosity towards David. He begrudges him for the proximity he has with Saya, who he would like to study rather than care for.

As a member of Red Shield Collins was sworn to secrecy and therefore could never publish his finding or research into Chiropterans. Due to this he is constantly plagued by the idea of his work and accomplishments being forgotten, and this leads him to join Cinq Fleches. When talking with an individual whom he believes to share his way of thinking and passion for research, he states his goal is to write his name in the history books in any way possible. This vanity makes him vey vulnerable to manipulation.

Dr. Collins is also quite susceptable to jealousy. When Julia is promoted to Diva's personal physician, he is instantly mad at her for gaining a higher position than him. In the last few episodes, he even goes as far as trying to murder her.

Dr. Collins is responsible for all research within the Red Shield organization that affect the Chiropterans. He is the mentor of both Julia Silverstein and Van Argiano. After joining Cinq Fleches, he is assigned the responsibility of being Diva's personal physician. This post of his is succeeded by his once favorite student Julia.

Dr. Collins is shown to use an SIG Pro SP2022 to shoot Julia but David saves her just on time to take the bullet himself. 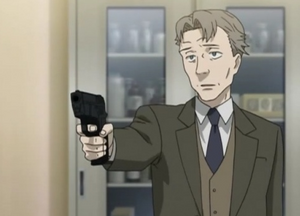 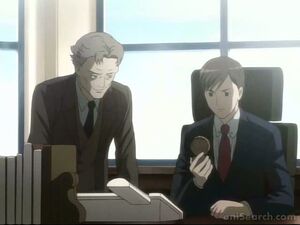 Aston accusing David, Lewis, Julia, Kai and Riku of being chiropterans in hiding, thus putting them under quarantine. 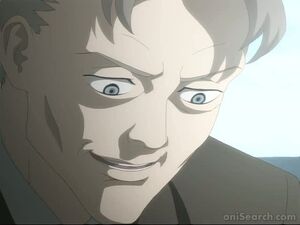 "David it makes me extremely sad that we need to suspicious about you, but you do understand?" 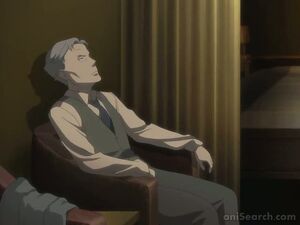 Aston sitting down, wondering if he'll ever get the Nobel Prize for his research. 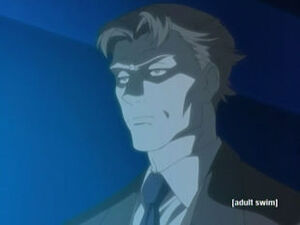 Aston's evil stare.
Add a photo to this gallery
Retrieved from "https://villains.fandom.com/wiki/Aston_Collins?oldid=3699875"
Community content is available under CC-BY-SA unless otherwise noted.