Astro Man is one of the eight Robot Masters and antagonist of Mega Man 8 and Mega Man & Bass. He originally worked in a planetarium, but was dragooned by Wily. Astro Man wields the Astro Crush for his Special Weapon; this summons fireballs that rain down around the user. The Homing Sniper can do a number on him.

Astro Man resembles a man about the same size as Roll. He wears a green suit, and has a green helmet. His goggles are black, but you can see his red eyes. His lower half's appearance is unknown due to him hiding it in a spherical ship-like vehicle.

Astro Man has a modest personality while being somewhat very shy towards others. He's easily startled and is something of a coward, thus not being very reliable in battle. He is also known to be great at hide-and-seek. His favourite hobby is stargazing, but cheep humour and old gags displease him.

In battle, Astro Man can attack with the two orbs levitating around him, also can disappear and reappear and uses the Astro Crush, his weakness is the Homing Sniper, after Astro Man was defeated, Mega Man obtain the Astro Crush. Astro Man reappears in the boss rush where he's defeated again.

Astro Man is one of the three first Robot Masters, in battle, Astro Man can teleport, summons Shururuns, and using his two orbs to attacks Mega Man or Bass to later use the Copy Vision, his weakness are the Mega Buster and the Magic Card, after he got defeated, Mega Man or Bass obtain the Copy Vision and unlocks the gate of the stages of Pirate Man, Dynamo Man and Tengu Man. He is the second boss to be defeated in the boss rush. 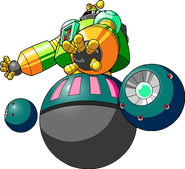