Affiliate of the Gear Project team

Have Gears and humanity living in one unity

Asuka R. Kreuz, also known as That Man and the Gearmaker, was the main antagonist of the Guilty Gear series. Originally thought to be behind everything in the series, it is later revealed that Happy Chaos is the true cause of many of his assumed crimes.

Nobody knows exactly who he is, but he seems to be very powerful. He was one of the discoverers of the magical science, and the deviser of the Gear Project, thus being the creator of the Gears. Because of it, He is often referred to as the "Gearmaker".

He used a man named Frederick as the prototype for the Gears. Frederick would later become Sol Badguy and seek revenge against That Man, pursuing and destroying all the Gears. Most of the cast of Guilty Gear is after him for some reason, be it for revenge or because of his great knowledge about just everything in the world.

It doesn't know exactly what are his goals, but he seems to be repenting for having created Justice, and is seemingly luring everyone to prepare them for a plan he has for the world, which involves the insurgence of a new threat greater than Justice. He has three henchmen, those being Raven, I-No, and Jack-O', all three of them are assisting him in his plans. He also recruited the help of Anji-Mito, in exchange for telling him everything he knows about everything. He has also created an isolated structure within the Backyard, known as the Cube. With it, he can potentially manipulate and reshape the laws of the universe to his whim.

Asuka's face and body are never seen and is usually covered in cloaks. However, one artbook showed him with a pure white hair and a normal build. However during the day when he was with Fredick (Sol) and Aria (Justice) he had blonde hair. In Guilty Gear Xrd: Revelator, he reveals his young true appearance which confirms his blonde hair, blue eyes with an eyepatch on the right one, an inverted red cross design on his bangs and pointy red ears. 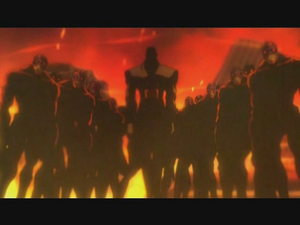 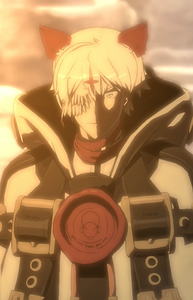